This recording of the fiddler Brian Rooney is a long overdue release for one of the London Irish scene's favourite musicians - the big man with the ready smile and the lonesome sound known far and wide as the Godfather. 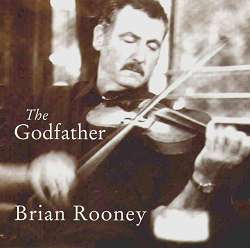 Rooney comes from a musical family in the townland of Derragoon near Kiltyclogher, Co Leitrim close to the Fermanagh border.  He moved to London in the '60s and has been a stalwart of the traditional circuit of Ireland's 'other capital' ever since.

This CD was organised by Gregory Daly and produced by another great London Irish musician, the multi-instrumentalist extraordinaire, John Carty.  Recorded in Longford in March '99, the album features superb accompaniment from three members of De Dannan - Brian McGrath (piano), Frankie Gavin (fiddle) and Alec Finn (bouzouki) - with banjo duties on two tracks handled by Carty.  It is indicative of the degree of respect for Rooney's fiddling that Gavin, who is believed by many to be Ireland's greatest living traditional fiddler, lends his support, albeit on flute.  Any worries that Rooney's fiddle might be overpowered by his fellow musicians' contributions are laid to rest on first listening.  This is a sensitively produced and mixed recording with the Godfather's talent to the fore throughout - just as it ought to be and, thus, a credit to all involved.

Nine of the thirteen tracks feature Brian's solo fiddle with sparse but tasteful and totally appropriate piano backing from Brian McGrath.  Carty has obviously learned a lot about the art of recording since his own debut album which demanded great determination from the listener to find the fine music that was hidden behind a dreadful muddy mix.  No such problems here – the fiddle is well recorded and fairly leps out of the speakers demanding the listener's attention.  Such attention is rewarded by a delightful, swinging open style which owes as much to three decades of playing London Irish pub sessions as it does to Rooney's Leitrim roots.

The standard of playing is so uniformly excellent throughout that I am reluctant to single out particular tracks for individual mention.  Suffice it to say that this is the finest traditional fiddle album I have heard in years.  Now if only someone would persuade Brian's old sparring partner Danny Meehan to undertake a similar project - are you listening Mr Carty?  Congragulations to all concerned for a job beautifully done.