Touch Me If You Dare

Back in 1988, Claddagh released an LP of music from County Clare played by a young piper and an older fiddle player who is one of the great stalwarts of Clare music.  The musicians were Ronan Browne and Peter O’Loughlin.  At the time this record was a revelation of the old style of playing, the pace was steady, the pipes were pitched in B and the tuned down fiddle had a mournful, nasal sound, and together they evoked kitchen sessions of fifty or a hundred years ago.  These instruments would not be audible beyond their immediate circle in a pub and tunes sourced from names such as Gilbert Clancy, Ellen Galvin and Garrett Barry provided a link to those bygone days. 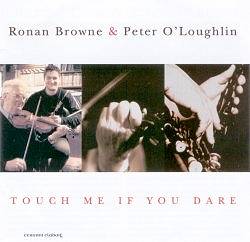 For years this record has been quoted as one of the "must have" items in the collection of any fan of Irish music.

For the last two or three years rumours circulated that Ronan and Peter had played a few gigs together and were thinking of recording some more music together.  Finally in the late summer, those rumours were confirmed and this record lives up to all the expectations.  At around 74 minutes long, the lads have plenty of opportunity to show their skills as they provide another wonderful selection of old tunes from Clare and beyond - but they also demonstrate their skills on flute.  Additional fiddle comes from Maeve Donnelly and the odd bit of piano playing is provided by Geraldine Cotter.  Both these guests have strong Clare connections.

The tunes on this record are mostly reels and jigs, there is a single pair of hornpipes, one fling and a set dance.  There are no slow airs, but Ronan included plenty of those on his own recently released CD.  Many of the selections are sourced from pipers.  Willie Clancy and Seamus Ennis are obvious sources but Johnny Doran and Patsy Touhey are usually associated with tunes such as The Morning Star and the set - The Old Bush, Rakish Paddy and My Love’s in America.  In the sleeve notes, Pat Mitchell recounts the clear line of Fraher’s jig back from piper Fraher, born around 1800, through his pupil James Bourke of Kilfrush, Limerick, then via his pupil, Brother Gildas, to Willie Clancy and on into the wider Clare musical community and beyond.  Jimmy O’Brien Moran plays the tune on Bourke’s set of pipes and he got the tune from Pat.  So the tradition is passed from player to player, and so many of these tunes have a similar history.

Another popular source is the old Ballinakill Ceili Band and some of their individual settings such as a two part version of Lord Gordon’s and a version of The Bunch of Keys here titled The Mills are Grinding show how settings must have varied in the days when travel was limited by horse power and ready access to radio and tape recorders were only dreamt of.  Other tunes are also given their old titles; the first tune on the CD, The Mountain Lark, is perhaps better known as The Old Wheels of the World as played by Willie Clancy and Liam O’Flynn but another tune also called The Mountain Lark was named The Steampacket by Patsy Touhey and Johnny Doran.  Names are just a hook to remind the musician of a particular tune.  In different parts of the country, these names meant different tunes to different players.

There is some wonderful playing on the recording and it is difficult to pick out anything as better than the rest, or indeed, anything that sounds like a make-weight piece.  The pipes and fiddle are played to the accompaniment of Ronan’s regulators - maybe the only aspect of the recording where the musician’s skill has been extended since the last record.  Indeed, Ronan is now viewed as one of the most innovative players of the regulators, offering quotes from Ennis and Doran as well as some rhythms from his time playing with modern rock or jazz musicians.  The production is exemplary and allows the listener to focus on fiddle or pipes.  The tunes and settings were selected while sitting in the kitchen and the easy pleasure of the two players has been carried comfortably into the studio.  As Pat says in the sleeve notes, "We are literally sitting in an old style session captured live on record".  When Maeve Donnelly and Geraldine Cotter play on some of the tracks it is like visitors dropping in and joining in for a tune or two.

There is absolutely no doubt that this CD will be held in the same high regard as its predecessor and one can do nothing more than recommend it.  It stands both as a document of the current standard of playing around Clare and Galway but also as a testament to the under-recorded champions of the music who carried the tradition through the earlier years of twentieth century.  This is simply a record to enjoy and the lads are to be congratulated on producing another great record of music true to the tradition.