Tracklist: When Yellow's on the Broom, The Berry Fields of Blair, The New Fair Song, The Thirty-Foot Trailer, Master McGrath, The Wagon in which I was Born, The Poacher's Fate, Granny's Old Armchair, The Banks of the Lee, The Old Lancaster Hornpipe, The Gypsy, Irish Mollie-O, The Star of the County Down, Hard Times Come Again No More.

The record number GBRM 102 is the only indication you get that this is not the first publication from the Boswell Romany Museum in Clay Lane, Spading, Lincs, or indeed from this group of performers. 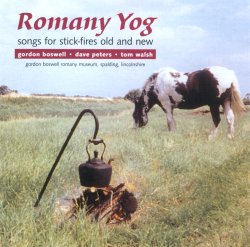 However, a 13-track cassette, The Romany Rye, from Messrs Boswell, Peters and Walsh was published in 1995, and contained such songs as Romany Rye, Raggle Taggle Gypsies and Hot Ashphalt.  So this accounts for the fact that a number of songs which one might have expected to find are absent from this selection.

It should also be remembered that this CD is primarily intended to be sold to visitors at the Museum shop - so this is more of a 'heritage' showcase than the sort of CD which normally gets reviewed in MT.  Nonetheless, there's some good singing and playing to be found here, presented with a no-nonsense honesty which is refreshing.  A yog is a fire, by the way.

I always find it interesting to realise that, whilst Gypsies and Travellers have, for a generation at least, been our sole repository of songs in the oral tradition, very few singers have many specifically Gypsy songs.  I'm not talking just about songs in anglo-romani - the paggardi jib or broken language of the British Gypsies - but songs actually about Gypsies or written by them.  On MT's recent Wiggy Smith and Family CD, only 3 of the 33 tracks could be so described.  If we include poaching songs, and ones associated with Gypsies like The Barley Straw the total still only reaches seven.  None of the Traveller singers I know about have repertoires which significantly differ from this sort of proportion.  Indeed, most of the songs about the travelling life, and which have been enthusiastically taken up by Travellers: When Yellow's on the Broom; The Thirty-Foot Trailer; The Blue Tar Road; The Moving-on Song, etc, have been written by Gorgios - and comparitively recently.  I find this very surprising.

My two favourite tracks both come via Tom Walsh - at least I assume so, because the performers are not cited for each track.  The Wagon in which I was Born is, on the face of it, a dreadful piece of nostalgic romanticising from the pen of Mr Walsh.  However, since this exactly what endears the entire Country & Western repertoire to so many Travellers, one can't really object - and it is a fine example, there's no doubt.  The other one is The Old Lancaster Hornpipe, a superb triple-time hornpipe played by Tom on button accordion in all its many parts and variations, with considerable dash.  The performance is very greatly enhanced by the step-dancing of Amos Muller, an old Gypsy dancer who came out of 'retirement' when he heard Tom play this at a session in the kitchen of Hanging Shaw Farm.  Luckily, a tape recorder was present!

If you happen to go to the Romany Museum - which I'm told is well worth a visit - this CD would be a recommended purchase.  If you don't, their website is at: www.boswell-romany-museum.com