This questionably essential, and hugely irritating collection of 25 tracks was issued to celebrate CCÉ's golden jubilee and launched at Scoil Éigse 2001. 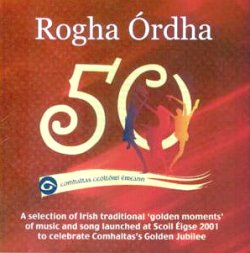 However, the irksome nature of this release consists of numerous elements.  Firstly, despite notes on the singers and musicians, not a single piece of information regarding the recording is provided, neither the date nor place of a track nor whether it has appeared on a previous CCÉ release.  Even when an indication is given, as in for example the statement that Paddy Glackin 'recorded these two reels when he was twenty years of age', it takes a combination of prior knowledge and guesswork to draw some rough conclusion.  These omissions are astonishing since one might have expected something a little better from the supposed guardian of traditional music in Ireland and, perhaps at the very least, an indication of whether a complete album-length recording of the performer is still available.

Secondly, said notes are extraordinarily imbalanced.  Biographical details are either sparse or non-existent.  So, for instance, we learn that 'Carmel Gunning has long been recognised as one of the most creative tin-whistle players of her generation', but we are not informed what this generation is, nor anything about Carmel's roots in the South Sligo tradition.  Sometimes the notes are inaccurate, as in the statement 'The Dohertys of South West Donegal', whereas (as Caoimhín MacAoidh writes in Between the Jigs and the Reels) 'While the Dohertys were not permanently established here (Southwest Donegal), they were regular visitors in this area and here they arguably left their strongest mark.'

Equally, we are told that Paddy Tunney comes from 'Castlecaldwell County Fermanagh' (sic).  He was actually born in Glasgow and reared in the townland of Rusheen in County Donegal, though he did live in Fermanagh for a time during his younger years.  Brendan McGlinchey's notes fail to mention his long residence in London, nor is a similar reference included in Julia Clifford's (which also omit any reference to her husband John or the Star of Munster Trio).

Presuming that the tracks have been selected from the CCÉ archive, the third irksome element lies in the omissions.  While Julia Clifford is represented by two tracks (the only musician so honoured), there is no place for Vincent Broderick, John Joe Gannon, the Castle or Kincora Céilí Bands, Bobby Casey, Junior Crehan, John Kelly, Joe Ryan, Jim McKillop, Noel Hill, Marcas Ó Murchú, Antóin MacGabhain, John Joe Gardiner and Connie O'Connell, for example (and that's just a an arbitrary selection).  Admittedly, some of these musicians have recordings available elsewhere on other labels, but the omission of Casey, Crehan, Gardiner, Kelly and the Castle Céilí band is simply scandalous.  Even worse perhaps is the failure to include a single track from one of the best live traditional music albums ever made, Tommy Peoples' An Exciting Session with One of Ireland's Leading Traditional Fiddlers (CL 13), recorded in 1976 and long deleted.  In contrast, CCÉ's music officer, Paddy Ryan, who is co-credited with the album's production, is included!

Arguably, these omissions might be justified if the actual selection fairly reflected the history of Ireland's music over the last 50 years, but the breakdown of tracks is as follows:

The presence of two harpers is unsurprising, of course, considering CCÉ's affection for the instrument but, surprisingly, neither player is Máire Ní Chathasaigh.  However, the representation of only one piper (Séamus Meehan) is extraordinary, considering that those who have recorded for CCÉ include Eoin Ó Cionnaith, Tommy Keane, Neillidh Mulligan, Matty Connolly, Tommy McCarthy and Mick O'Brien.  A similar criticism could be levelled regarding the concertina representation, even though the musician is the superb Micheál Ó Raghallaigh.  As for singers, well that's another one to quibble about.

But what is indisputable is that this CD is only sixty-one minutes in duration!  This is simply short-changing the public in comparison to recent commercial releases such as Ronan Browne and Peter O'Loughlin's Touch Me If You Dare or James Keane's Live in Dublin, both of which present almost an hour and a quarter's music.  Considering that the only additional costs involved for CCÉ would have been remastering say three or four additional tracks, then this shortfall is simply irritating.

However, mentioning the word 'remastering' leads onto the fourth annoyance.  Since the word itself does not feature once in the entire package, one is left wondering just how much remastering took place, while questioning the reproductive quality of some of the tracks presented on this CD.  The worst example by far is the disservice done to Peter Horan and Fred Finn where there appears either to be a radio playing or a conversation taking place in an area adjacent to the studio.  This background sound does not appear to be present on the cassette version of the original recording, so either it has been boosted by the remastering process or somehow was allowed to infiltrate its way in.

The fifth and final irritation is the album's claim to present a selection of 'Traditional 'Golden Moments'' (not just 'traditional', as Myles na Gopaleen might have noted, but 'Traditional' as if capitalisation offers extra validation).  Now there is absolutely no denying the value of hearing musicians such as Brendan McGlinchey, John Doherty or Bobby Gardiner in full flow (and even Joe Burke, if he's your cup of tea), or the golden voice of Nioclás Tóibín, but there is absolutely no possibility of the piano accordion of one Michael Tennyson or the flute of Eugene Nolan entering the golden moment pantheon (no matter how skilful musicians they both are).  One such golden moment was the Tommy Peoples recording and another, held in the same CCÉ archive, which brought together Bobby Casey, Junior Crehan, John Kelly, Patrick Kelly and Joe Ryan for the album Ceol an Chlár 1 (again not reissued in CD format).  That neither recording is represented in Rogha Órdha is this collection's ultimate indictment.