To put the record state, just in case anyone reading this review is under any misapprehension, the album's excellent cover is not a portrait of the uilleann piper and low whistler, but an oil painting by Anthony Ruby (The Soul of Man). 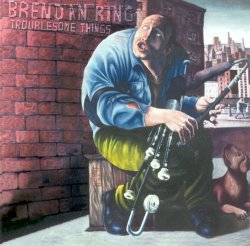 Fortunately, there's a picture of Brendan on the case liner to prove it!

The Troublesome Things of the title, taken from a little-known poem by Thackeray, can hardly be a more appropriate comment on the uilleann pipes (ask any piper about the effects of humidity on reeds, for instance), but Brendan Ring proves himself an undoubted master of their complexities on this welcome release.

Perhaps best-known for his appearance on John Spillane's The Wells of the World album, Brendan has been a key figure in the Cork traditional scene for some time.  There's a strong Corcovian presence on this album too, not least in the wonderfully clear engineering and co-production from Ray Barron (wizard mandolin player with Two Time Polka), and other notables contributing include Gerry McKee (bouzouki and guitar) from the sadly defunct Nomos and John Neville (guitarist with North Cregg).  Other contributors include percussionist Mel Mercier and singer Rachel Healy.

Brendan's unusual in playing a set of pipes of his own construction (in concert pitch, by my reckoning) and extracts a glorious ringing tone (no pun intended) from his chanter, using the regulators sparingly to produce simple but effective harmonies which are heard no better than on the well-known jig Brian O'Lynn.  This runs into The Lisnagun Jig, one of several of Brendan's own compositions featured here, while another two, The Robbery of Chester Jail / Rí Ring's, demonstrates not only his complete inheritance of the tradition, but also, via his notes, a rather dodgy bloodline, albeit described with characteristic humour:

These tunes were written for two of my wilder ancestors.  One my great-great-grandgather Horatio Nelson Tivvy, a native of Cork city, became governor of Chester jail and absconded with all the prisoners' possessions, never to be seen again.  The other, known as 'Rí Ring', from Coolivarne, County Cork, led a rather colourful life, having been wanted for various Whiteboy offences, including the shooting of a bailiff, he reportedly also shot his way out of jail.

(Whiteboys, by the way, were members of an eighteenth century Irish agrarian organisation formed in response to perceived grievances against the peasantry who committed their vengeful acts at night wearing white shirts.)

Several of the piping tracks are recorded unaccompanied, but one of the exceptions is a madcap romp through Madame Bonaparte, recorded live at The Lobby Bar with John Neville in manic accompanist mode.

Some might be disappointed by the length of Troublesome Things, which trots home in a mere thirty-eight minutes, but this is such a clear case of quality overriding quantity that nobody should feel shortchanged by this excellent independent release.  (Email brendan.ring@wanadoo.fr for details)

The Humours of Piping

There have been several notable compilations of uilleann piping over the years (most motably Claddagh's two volumes of The Drones and the Chanters), but this has to be the first to concentrate entirely upon pipers from Northern Ireland.  Though not possessing as strong a piping tradition as other parts of the island, 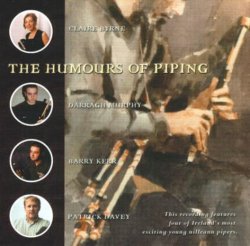 The Humours of Piping focusses on four young members of the crop: Claire Byrne (from Newry); Patrick Davey (from Belfast); Barry Kerr (from Lurgan); and Darragh Murphy (also from Newry).  That three come from County Armagh is strong evidence of the instrument's revival there, stimulated by the work of Brian and Eithne Vallely and The Armagh Pipers Club.  Barry Kerry recorded his own mainly flute-focussed album, The Three Sisters, in 1998, while Patrick Davey is a member of Craobh Rua and featured on the band's last album If Ida Been Here, Ida Been There (2000).  As far as I am aware The Humours of Piping marks the recording debuts of both Darragh Murphy and Claire Byrne.  The latter, of course, is now one of the few women pipers to have been recorded (alongside Máire Ó Grada and Emer Mayock).

Each piper has been allocated a quarter of the album's sixteen tracks, though lovers of unaccompanied piping should beware that only two tracks (Claire's rendition of the air Bean Dubh a'Ghleanna (Dark Woman of the Glen) and Barry's version of Garret Barry's Jig) are not unsullied by guitars - often far too prominent in the mix.  Although the guitarists are almost all of a high standard (with one notably thoughtless exception), it is disappointing that these four pipers feel unable to demonstrate their virtuosity without a background of strummed steel strings.

That said, as anyone familiar with his playing would expect, Barry Kerr runs away with the show by some distance.  Fast-paced and tight-fingered like his major influences, Johnny Doran and Paddy Keenan, his playing of Tá an Coileach ag Fógairt an Lac (When the Cock Crows it is Day) / The Blackthorn Stick (single and double jigs respectively) is just breathtaking.

Patrick Davey's four tracks offer a welcome variation in that on two he employs a flat set of pipes pitched in C.  The first of these is an effortless rendition of Marbhna Luímhní (Limerick's Lamentation) which is marred by some particularly inappropriate guitarwork by Christine McKenna, while the second sees a perky coupling of the hornpipes Tomorrow Morning and Murphy's.  The latter is ruined by high-pitched guitar plucking more suited to an edition of Playschool (with apologies to Brian Cant).

Claire Byrne kicks off the album's proceedings with a quickfire set of reels, while also opts for that old pipers' chestnut The Frieze Britches, allowing her to demonstrate accomplished rolls and triplets.  She also produces a fine pair of hornpipes (Dunphy's and The Derry), the former played both with and without drones, while a too prominent guitar undermines an able rendition of the latter tune.

Lastly, the producer of this album, Craobh Rua's Brian Connolly, has done Darragh Murphy a great disservice by placing the guitarist, Ian Smith, far too obtrusively in the mix.  Darragh's undoubted talents are allowed to shine only on the double jig Out on the Road (where Smith is content to replicate the pipes' drone) and on the air Ag Taísteal na Blárnan (Travelling through Blarney).  However, even in the case of the latter, the effect is diminished once the tune runs into more heavyweight accompaniment for The Boy in the Gap.