Up, Down and Around 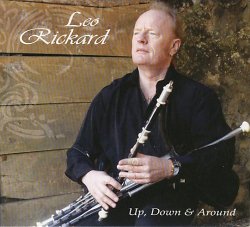 It's now ten years since Leo Rickard brought out his debut album (Pure Piping, Ceirnini Claddagh CCF33CD, also reviewed in these pages) in which he celebrated, so to speak, the completion of his piping apprenticeship (i.e. the traditional 21 years) by a bravura demonstration of his command of the armoury of piping technique, the rolls, cuts, curls, crans, pops and shivers, not least through the inclusion of many of the classic show-pieces made immortal by the recordings of the likes of Leo Rowsome and Willie Clancy.

And, we said, why not?  What better way to show that you are eligible to follow in their footsteps? In any case, this time-served piper has gained entitlement to prove his ability in any way he sees fit, and it could be argued that non-players should accept there are limits to the extent to which they can criticise the piper's choices of presentation.

His new CD, the excellent Up, Down and Around is a very welcome addition to the catalogue of recorded Irish Piping, for it is clear that during the intervening ten years between albums Leo has continued to develop significantly in his approach to playing and presentation of piping and piping melodies.  He has grown in both maturity and confidence.  Let me explain.

By 'maturity' I mean that on the first CD the aforementioned piping technique was vigorously employed at most opportunities, whereas now on this second album the decorations and ornamentations, while still there to be heard, are much more subservient to the needs of the mood of the melody.  It is used with subtlety, to add colour and power where appropriate rather than displayed at every opportunity.  For my taste this restraint adds admirably to the listenability of the overall collection.  This is not to say that the playing is short on character - Leo can still set off some piping fireworks when you least expect it - but it helps the listener to savour the complexities that the decorations add to the melody.  As a result this album should rightly appeal to a far wider audience than just the hardcore fundamentalist wing of traditional Irish piping.

By 'confidence' I mean that he has felt free to expand some of the selected tunes with new textures and harmonic opportunities by including additional instruments, captured in real-time rather than multi-tracked, which gives a sharp-edge tension to the performances - one can sense the eye-contact between the musicians, even though you can't see it!

Of course the use of other instruments and harmonies alongside the pipes is not in itself ground-breaking - this has been going on since the days of Seán O'Riada - but Leo demonstrates particular care in his choices.  While some of the tracks are accompanied by the familiar guitar and bouzouki on others we are treated to the flute, the cello and in one instance a second chanter playing in harmony.

Confidence and maturity are likewise exhibited in the mix of traditional and newly-composed tunes that make up the content of the CD.  In fact, Leo has selected a beautifully balanced programme of melodies, which I found to be a pleasure to listen to from start to finish.  I use the word 'programme; intentionally because I think the CD is best heard end-to-end in its entirety, in order to savour its subtle contrasts (OK you can refill your glass after track 7).

This programme balance works on several levels concurrently.  The pace of the tracks is varied, bright sets following on from slower pieces.  Tracks on the 'concert' pipes (pitched in D) are nicely contrasted by items on the narrow-bore 'flat' pipes' (pitched in C#).  There is only a half-tone gap in pitch, but savour the difference in sound-colour.  The bite of grapefruit, so to speak, contrasts with the rich sweetness of fig.  Or, if you prefer rock-speak, rather like the ice-fire bite of the Fender Stratocaster compared with the Gibson's hooting humbucker.

Again, items on solo pipes are balanced by items where Leo is joined by fellow musicians, long-time associates who clearly are accustomed to Leo's phrasing and style.  We hear Raphy Doyle and Lochlain Cullan, on guitar and bouzouki respectively, who provide the resonant strings background that is now familiar in the Irish session combo, nicely judged in the mixing so as not to be too obtrusive, but providing that pleasing polyphonic chorded sound-curtain for the chanter melody to play against.  On a slow waltz later in the programme (Far Away, a contemporary waltz-time tune from the USA fiddler Peter Jung) the lead is taken by flute (Julie Maisel) and cello (Grainne Hope), with Leo taking up the melody against the cello during the course of the piece.  The end effect is haunting, one of those themes that takes up residence in your head for the rest of the day.

On another track (the slow waltz Inisheer) Leo plays the lead on the flat pipes and is joined in harmony by Ciara Maxwell's flat chanter, during which Leo adds regulator chording to create another thoughtful air.

This is a good opportunity to compliment Leo on the quality of his reeds in the chanters, drones and regulators.  They are without fault in pitch and tonality, delivering notes crisp and sweet or mellow and fruity, as required.  The drones and regulators have been carefully tempered in the recording mix, confined to the background or brought to the fore according to the needs of the piece being played.  I surmise that considerable thought and care has gone into balancing the sound mix of the pipe components as well as the accompanying instruments on each track.

It's also a good opportunity to remark on the mix of traditional and 'new' tunes presented in the programme.  On balance I prefer listening to the good old tunes that have stood the acid test of time.  Many of these new tunes seem to exist only as ego-boosters for the composer and to enable their cliques to hog the session.  They usually have as much survivability as a mayfly.  That said, there are still occasionally tunes composed in the traditional style that fit seamlessly within it, take root and will survive on into the future.  Leo has intuitively selected new tunes which fit successfully into this latter category.  In fact two of his own composition, played on the flat pipes (Planxty Brigid Maxwell and The Maid of Bearna Lodge), I fully intend to include into my own repertoire at the earliest opportunity.

There isn't the space to examine each track in detail.  Suffice to say that each follows on from its predecessor with a pleasing contrast of some kind - solo then accompanied, traditional then modern, concert pipes then flat pipes, slow then sprightly.  A real chiaroscuro interweaving of light and shade, of sound and mood.  All tracks have something particular to themselves to make them attractive in isolation, but just as much attraction comes from the contrast to the item that precedes it.  It's that programme balance I keep going on about.

My own particular favourite moments?  The perkily bright chanter work on the Camerionan Reel (a nice contrast to the steady jigs on the preceding track); the dark chocolate tones of the flat pipes, played in close style, with their rumbling drones, on Planxty Brigid Maxwell (in contrast to the Camerionan set that precedes it); the chanter harmonies on Inisheer; the flute and cello additions on Far Away; the marches of the Battle of Aughrim set played with the fourth drone set to a modal 5th, unusual but effective given the keynote of the tunes; the tasteful legato regulator work during the slow air Lament for Limerick; and the final barnstorming trio of reels, with chanter work very reminiscent of Leo's friend and mentor, Paddy Keenan, finishing with a triumphant Flogging Reel.

Probably most of all I like Leo's treatment of the classic Nora Criona, where the initial 6/8 rhythm is exchanged for a slow dignified exploration of the basic theme in the old-fashioned Munster style (accompanied thoughtfully by the cello) and then re-asserts itself with more of the traditional jig.  Here's a sound clip of the first half of the track.

In conclusion, then, I have listened to, greatly enjoyed and now applaud this CD.  I congratulate Leo on his choice of programme and its high production standards, and trust it will get the exposure and praise it deserves.  Hopefully we won't have to wait ten years for the next one.