Ever since the release of his self-titled debut album in 1998, Belfast's Colin Reid had been garnering a reputation firmly at the forefront of a new generation of fingerstyle guitarist, a status enhanced by some blistering live performances, not least at the Cambridge Festival. 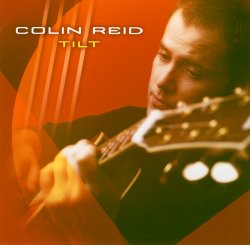 While its predecessor appeared on the small Shetlands-based Veesik Records, Tilt sees Colin signed to Topic Records for that 'difficult second album' - as rock journalists are wont to style them.

This time round, Colin's firmly his own man, producing Tilt and penning nine of its twelve tracks.  The exceptions are the Penguin Cafť Orchestra's Music for a Found Harmonium (popularised in Irish circles by Patrick Street), Seed on the Wing, written and sung here by Boo Hewardine, and Fleetwood Mac's old chestnut Never Going Back Again (with Eddi Reader on vocals).  Coincidentally, both the first and last of these have previously been recorded by Sharon Shannon which might be revelatory of Colin's listening habits.

No less than three of the tracks come from Carus, a suite written by Colin for himself and a string quartet featuring the violins of John Fitzpatrick and Oleg Ponomarev, MŠire Breatnach on viola and Neil Martin on cello.  Colin is obviously fond of string backing since he uses combinations of these musicians on three further tracks while the guitarist does not appear at all on the quirky Crimes against Music Part II, but just piano, bass and drums.  So, those looking for more of the solo guitar work which characterised his debut are left with a mere three outings, the aforementioned Found Harmonium, a mood-dripping Liam and Twosticks, the only piece on the album where Colin approaches lightning level.

Overall, Tilt is a subdued affair with the notable exception of the closing The Clay Pigeon Rag where Ponomarev's fiddle swings in a manner redolent of Stephane Grapelly, but one which rewards repeated listening.  There's not simply a subtlety to Colin's own playing, but his compositions and arrangements show an increasing sophistication and a desire not to be pigeonholed as the new Jansch or Renbourn.