Let Down the Blade

John Regan is a B/C box player from Drumcliffe in north Sligo who was the Senior All-Ireland Accordeon Champion in 1970.  Thirty years on, his Let Down The Blade album is a mature and pleasant, if unspectacular, collection of relaxed interpretations of some thirty-six tunes.  The material, drawn mostly from the broadbase session repertoire, includes popular reels such as: The Bellharbour, Flax in Bloom, Scotch Mary, The Laurel Bush and The Copperplate; jigs, Ship in Full Sail, The Knocknagow and Bimis ag Ol; and hornpipes, Queen of the Fairies, The Tailor's Twist and The Greencastle. 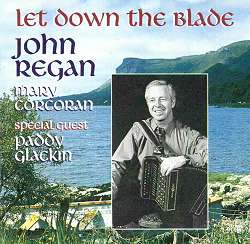 However, it is when he moves away from the standard repertoire on Maid At the Well (a rarely heard jig also to be found on Tommy Keane and Jacqueline McCarthy's excellent The Wind Among the Reeds album), Brendan McGlinchey's Farewell To London, James F Dickie's Strathspey and a waltz from the French ballet Coppelia by Delobes, that Regan's individuality comes to the fore.

My main problem with this album is lack of tonal variety.  Piano accompaniment on eighteen of the nineteen tracks is provided by Mary Corcoran of the Templehouse Ceili Band, while John's son Donal plays piano on the remaining track.  Roger Sherlock's sleevenote describes this accompaniment as sensitive and complimentary, but to my ears the unrelenting vamping while fine on some tracks, particularly when mixed at a lower level, becomes tedious to the point of being downright annoying on repeated listenings.  Tune backers, whose approach is simply to provide strident rhythmic and chordal accompaniment without embellishment, syncopation, harmony or counterpoint, do have a valid place in the general scheme of things, but if their role is simply accompaniment without equal individual creative endeavour there is absolutely no reason for such accompaniment to be this loud in the mix.  When track 15 begins without any accompaniment it is like a breath of fresh air as Regan's box sounds delightfully different without the distraction of the incessant piano vamp, but unfortunately the space allowed the reeds is soon cluttered as the piano returns for the second half of the track!

Fiddler Paddy Glackin guests on five of the first nine tracks and these are the selections which make this album worthwhile as Paddy and John lock together beautifully to make excellent dance music.  Unfortunately, the fiddle does not reappear for the remainder of the album, and the only tonal variation in the remaining ten tracks is when the solo box and piano backing are joined by either Donal or Colum Regan for accordeon duets.  This lack of imagination in the programming of the album's tracks serves to underline the need for a producer which is a common fault in so many of the home-produced CDs which seem to pour out of the traditional music scene these days.  I recently returned two other albums sent to me by the same distributor for such reasons – although they were professionally packaged and the music they contained was technically accomplished, recorded in tune, in time etc., there was little by way of individual creativity, interesting arrangement, originality, not to mention evidence of careful thought, to recommend to the reader that he/she should part with their hard earned readies.  If one simply reproduces traditional music without adding something of one's own to the performance and presentation it is difficult to find reason to recommend such a new release when there is already so much fine music available on which the readers' money would be better spent.  I sent the other two CDs back to their distributor without review because I felt it kinder to say nothing than write something negative.  The tracks featuring Glackin saved this album from a similar fate, but only just.

A slightly different mix, variety of accompaniment or, for that matter, a few unaccompanied solos, and a tad more consideration to the placement of the superb box and fiddle duets would have made this a much more listenable and enjoyable album.  As it is, I can't really imagine Let Down The Blade being sought after by many except as a souvenier of live gigs and by friends and relatives of John Regan's family, and that's a shame because Regan is a fine musician and this could so easily have been a much, much better album.