The Miners' Sword Dance of North-East Englnd
by Phil Heaton 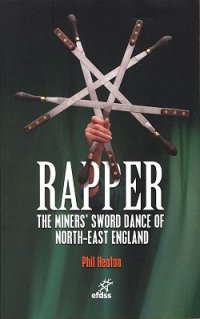 The rapper community could be characterised as somewhat anarchic, and the dance itself, something of an enigma.  Devotees and aficionados thrive on anecdote and rumour, the history is murky and thinly recorded.  Tall tales abound and teams long gone are portrayed as heroic, indeed superhuman.  This then is the background to today's exponential growth in interest and in rapper activity.  It is therefore no surprise that Phil Heaton's publication has been one of the most eagerly awaited for many moons.

His personal credentials for writing this book are not in question.  Dancer, teacher, promoter, ambassador, agent provocateur, Geordie and EFDSS Gold Badge holder, if anyone knows the truth, then it's Phil!

The book is a compilation of well crafted papers (chapters), each one exploring much of what is known about some aspect of this unique dance tradition.  The first two chapters explore the history from unspecified sword dances linked to local seasonal and ceremonial events, and on through the 19th Century, when there are more and more references to dancing colliers and villages that we now associate with coal mining and rapper.  This section ends at the 'golden days' of rapper in the early 20th century.  A period characterised by the musical competitions and teams that have since acquired a legendary status.

The social history is thoughtfully interwoven for undoubtedly the miners struggle for better working and living conditions informed and empowered their dancing.

We then move on to review the activities of Cecil Sharp, collecting the dances and publishing The Sword Dances of Northern England.  Phil looks this sacred cow squarely in the eye and courageously notes the shortcomings in Sharp's work - difficulties with notation, the recording of comparatively few dances, his naivety in the face of wily pitmen, etc.  Hurrah for Phil, but he does acknowledge the importance of this first exposure of the dances to a wider, unsuspecting world.

Chapter 5 briefly examines the evolution of the swords.  This is followed by a canter round the many competitions held in the North East and which fuelled the expansion and development of rapper during the golden years of the early 20th century.  This resume brings us up to date and to the current major competition, Dancing England Rapper Tournament or DERT as it is universally known.

As a postscript, the more recent competition, DART, (Dancing America) is mentioned, though a later chapter contributed by US devotee Rhett Krause lays out the whole history of rapper across the pond.

The largest section of the book is devoted to the teams and their dances.  This comprises the often anecdotal history associated with the dances and their eponymous villages.  The dances are grouped as the County Durham dances and the Northumberland dances - South and North of the Tyne, representing the collective memory of dancers, musicians and teachers.  It makes fascinating reading.  It brings us up to the 1950s and to the earliest of what could be described as revival teams, though none of these demarcations are sacrosanct as teams 'died' and were then reborn on many occasions.  The Newcastle Kingsmen enjoy a chapter to themselves, contributed by John Asher - perhaps, currently, the most dedicated and perspicacious observer of the tradition.

A chapter on the period 'after the war' reviews the dancing through the '50s, '60s and '70s and brings us to the aforementioned Rhett Krause's American contribution.  A final 'Conclusion' summarises all the seminal occurrences and bravely pins the historical epicentre of rapper on the village of Earsden, and it's 'Royally' endowed team.

There are substantial appendices:

'A' Music, by Dave Ledsam
'B' Stepping, by Ian Craigs
'C' A selection of dance notations (do try them!)
'D' Further history on the manufacture of swords.  A comprehensive bibliography and a generous index round off a jolly good read.

It's a shame it isn't printed in a size to fit the pocket.  This book will undoubtedly be an indispensible guide and aide memoir to any jobbing rapper dancer.

Chris Metherell's collection of archival film clips and accompanying web based history of the dance is the perfect antidote to a cold and rainy winter evening.

The Rapper History DVD Rom is the ideal accompaniment to Phil Heaton's book, covering all aspects of the dance in great detail and in a format that enables and encourages you to dip in and out as the fancy takes.

Over 125 UK rapper teams - past and present - are listed, many with associated film clips, most with picture galleries and all with a brief history.  Then of course there are the American teams and a scattering of groups from other parts of the globe.  You are led to the conclusion that rapper dancing must rank as a very successful UK cultural export.

The second disc is a DVD film collection of 16 clips of important teams both historic and contemporary.  In each case you see either a complete dance or as much as is available in the case of some archival footage.  The selection is subjective but Chris has chosen well with dances that are both significant and entertaining.

I found that on the computer (reasonably new) some of clips did not run smoothly, but on the DVD player, for which it is no doubt intended, it was fine.

This two-disc set represents a monumental research effort.  Cynics might say that when you have seen one rapper dance you have seen them all, but for the committed rapperist, it is nothing less than a cornucopia.

Available from EFDSS at: www.folkshop.efdss.org