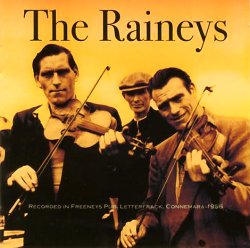 The Raineys are Paddy 'Big' Rainey, his brother Stephen 'Spare Parts' and his wife Bridie or Biddy.  The Rainey family had been well-known musicians in Galway over several generations, but these three went to England some time in the 1960s ... and disappeared from sight.  But not before some of their playing and singing had been recorded in Freeney's Pub, Letterfrack, Connemara, in 1956, by an Englishman, Professor Tony Knowland.

Much of the booklet notes chronicle the search for the Raineys, the recordings and photographs by present-day enthusiasts which, though interesting,

is not the subject of this review.  Another substantial chunk of the booklet attempts to describe the music, but Dermot McLaughlin eventually gives up and admits that you really have to listen to it.  So I have (sound clip - The Woman of the House)

This is a very strange record.  The performances run directly contrary to almost all my beliefs about how music should be played, songs should be sung ... and yet I enjoy it immensely!

By modern standards the tunes are not played particularly fast, and yet there's a definite sense of the music hurtling past you, flowing by in an almost continuous stream.  I think that part of this is as a result of there being very little emphasis on the melodic shape of the tunes.  Almost every musician I've ever heard will stress the first beat of the A and B musics and their repeats ...

and many will stress lots of other melodic nodal points as well.  The Raineys do this very little; indeed they often play passing phrases and lead-ins just as forcefully as they do the melody phrases.  The result is that the listener can often be fooled as to exactly where the tune parts start and finish (sound clip - The Swallow's Tail) ... the 'shape' of the tune becomes blurred, whilst the rhythm remains strong and unstoppable.  McLaughlin suggests that 'this is music for dancing as much as for listening', and he may be right - although the booklet notes seem to imply that the Raineys earned their living from playing and passing the hat round afterwards; there's no mention of them playing for dancing.

Indeed, if they did play for dancing, one would imagine that their playing would retain more of the shape of the dance figures - it wouldn't, as it does here on many tracks, just gradually start up in a quite lackadaisical manner, get into the groove, roar down the musical highway for a while ... and then stop - rarely at the end of the tune!  My impression is that they're playing not for the listeners, not for dancers, not even for themselves ... they play because this is what they do!  Their music is, in a strange way, who, or even what, they are.

The songs, or rather, the singing, is also unusual.  Biddy sings The Bonnie Irish Boy, The Woodlands of Loughglynn and Katie Daly.  The first two are performed in an extremely straightforward manner - so much so that there's scarcely a note or an emphasis different between one verse and the next.  I would characterise it as the sort of pub singing which is used simply to make a break between the sets of tunes from the brothers.  The listener gains no insight as to the attitude or emotions of the singer, nor much as to what the song is about.  Like the music, these songs seem simply to be what Biddy does.  And then there's Katie Daly.

This is quite extraordinary!  It's hard to believe that this is the same singer.  While the first two songs are in strict tempo, with Katie Daly Biddy abandons all concepts of rhythm, pulse, bar length ... and just lets rip (sound clip).  And the brothers follow her perfectly!  It's an amazing performance - and perfectly placed at the end of the set.  One wouldn't want to hear another of her 'straight' songs after this.  We just get a final set of reels and that's it.

There's one little slip-up in the production details - tracks 13 and 14 are reversed on the CD, compared to the information in the booklet and tracklisting.

I said earlier that I enjoy this CD immensely - and so I do.  But I wonder whether it's more that I'm intrigued, fascinated, puzzled, astonished by it.  Unique is a word which needs to be used with care and consideration, but I do think that The Raineys may be unique.  They are, without any doubt, extraordinarily interesting.

The CD is available from: www.paveepoint.ie