What are you looking for when buying a 'traditional' singer's CD?  Superb performance?  Good-going, foot-tapping accompaniments?  The chance to expand your own repertoire?  An insight into the way people sang before the advent of the gramophone and radio?

This CD plays strongly to the last two, for it demonstrates the style and repertoire of a singer in his sixties - whom the 1960s' Revival seems to have passed by. 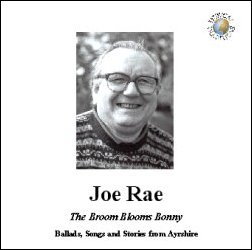 For Joe Rae from Ayrshire appears to have a repertoire largely gained from family and farm workers - especially shepherds.  Like any singer, 'traditional' or otherwise, he was exposed to, and enjoyed, a wide repertoire of good songs, whether 'National Songbook' art songs, music-hall or concert hall - or 'folk' songs (unlike traveller singers he seems short on Country & Western).  His claim that there was no wireless in the house in his early days seems unlikely for what was a radio heyday in the 1940s (if only for war news), but memories of family sessions round the piano are convincing enough.

Anyway, Joe hears of the Kinross Folk Festival and begins to turn up and sing.  Not only to sing there and at other TMSA festivals, but to tell stories as well, of which three are included on this CD.  He performs song or story in a mainly simple and unornamented way (the tune occasionally wanders but the listener's attention - especially to the stories - doesn't), and without wanting to seem patronising, I would classify him as a fine 'fireside singer'.  In Daisy Chapman's must-have CD, Ythanside (MT CD 308) she comments in 1987 on traditional song: "It's only in recent years it's been taken up - it lay flat for a long time.  Maybe in the past 20 to 30 years, but before that it was just sung round the fireside.  Not in halls like what it is now, you see."

Why spend good money on a 'fireside' singer?  The three stories, Tam McKissock and the Mermaid, The White Worm o' the Clachan and The Carline Stane are worth having as good examples of universal tales, told in a way that illustrates the art of the story-teller.  Joe's great ballads come over finely in versions of Captain Wedderburn's Courtship, Sheath and Knife, Lord Saltoun and Auchananichie, The Bonny Hind, Katharine Jaffray, and Willie and Lady Maisrie, in his gentle but moving manner.  His tunes are not always the usual ones, and are worth adding to your repertoire.  Added to these are unusual and entertaining songs such as Yell Gang Tae the Pawn, Paul Jones, a snatch of Bogie Man (Go From My Window), the rare The Auld Man's Fareweel, not to mention the Rabelaisian She Wadnae Dae It.

In other words, a CD worth having and a feather in the cap for Mike Yates, who has skilfully enabled Musical Traditions to bring to the fore another fine singer/storyteller well worth the hearing.  Let's hope he continues to record and give us more of the same kind of singer - if you are interested in good 'traditional' performance, that is.