If You Are Irish - Pioneer Irish-American Recordings 1923-34

Chris Strachwitz, that doyen of vintage ethnic music reissuers, claims that Frank Quinn, heard here on his first solo CD, is his favourite Irish-American performer.  I lauded Quinn in the Flanagan Brothers review elsewhere on this site, and, now that I think about it, would probably have to agree with Strachwitz.

One of the more 'traditional' sounding (if you get what I mean) stylists to record, Quinn's fiddle technique is almost immediately recognisable. 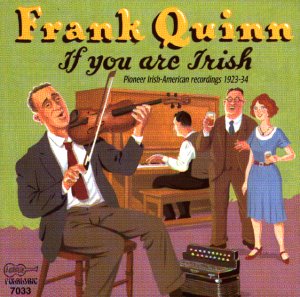 Only when playing the button accordion (at that date everyone was still using what in England we still call melodeons) does he exhibit any overtly commercial influences.  As I've said elsewhere, John J Kimmel's style was practically all-pervasive on subsequent Irish-American accordion players recorded during the inter-war period.  Quinn holds out more than most, though as demonstrated by The Rakes of Drummlish, like Joe Flanagan and others he could almost emulate it.  Wisely he doesn't attempt Kimmel's difficult technique of trebling on the same button - all of Quinn's treble effects are well executed on adjacent buttons.  On The Four Courts he leaves the piano to provide the rhythmic accompaniment, but in Eddie Dunn's Favorite Reel there is none, which allows us to hear Quinn's rather basic bass button style.  Although the melody whizzes along at a great rate the grunty basses create a somewhat draggy effect.

And while on that tack, we might observe that Ed Geoghegan, Quinn's most frequent pianist, often drags the beat in a similar manner.  In Rafferty's Reel he only catches up about half way in, though elsewhere, as in Paddy McGinty's Goat for example, he is much more together.  Geoghegan treats Molly in the Woods as a fiddle/piano unison duet, which has a sure-fire appeal for this Eleanor Kane fan.  Couple this with other tracks, such as the delightful duet with accordion player P.  Crowley on The West Port Chorus, where the tune is rendered unadorned in almost perfect unison, and we may observe that Quinn didn't actually need a back-up piano to make him swing.  His style on both fiddle and accordion contains just the right amount of surging into bars for dancing when necessary.  That said, whenever his pianist is more simpatico, like the unknown player on Quinn's manic performance of The Leg of the Duck, tunes are distinctly enhanced.

Three of the vocal numbers concern emigration and sadly parting from loved ones.  "I'm bound for New York City, boys, three thousand miles away," sings the emigrant in Good Bye Mike, Good Bye Pat.  Quinn had been there, done that, at the age of ten.  the mock crying on this track reminds us that celebrations held to bid farewell to departing migrants were often know as 'American wakes.' This a mighty fine performance, as are the majority of his recorded vocal pieces.  One duet with Nan Fitzpatrick, Going to the Fair, is a truly weird and wonderful song.  The couple alternate lines, but the second half of each consists of nonsense syllables.  And Jersey Lightning is one of the truly great performances in the vaudevillean Irish genre, with all component parts meshing together perfectly.

Carpings concerning production and presentation are few this time.  Though its title is appropriate, I suppose, the rather low key An Irish Farewell is hardly the track I would have chosen to end the CD.  After complaining on several recent occasions, it's good to see an American producer finally offering up (almost) complete discographical details.  Yet even here the inclusion of matrix numbers is inexplicably selective.  The recording date given for track eight is a year too early; while Far Away in Australia has Quinn playing uncredited fiddle.

The title song, though produced electrically, actually sounds as if it had been recorded through a horn.  Most of the transfers, however, are perfectly acceptable.  That said, the acoustic Rakes of Drummlish is rather poorer than one might have hoped, while Molly in the Woods is noticeably swishy.

Reg Hall, quoting Harry Bradshaw, who has collected among Quinn's descendants (and is shortly to issue another Quinn CD on his Viva Voce label - I can hardly wait), tells me that Quinn himself was a shy man who seldom gave public performances.  This is difficult to reconcile with the extrovert we hear in the recording studio.  Whether performing solo, with other singers, or in an ensemble that compares very favourably to regularly-constituted ceildh bands such as Dan Sullivan's (on The Bunch of Rushes here), he is the consummate professional.

An excellent release which I hope will be the first of many to feature this fine artist (after all, he recorded enough for half a dozen more).  With a running time of 79 minutes 16 seconds (79:25 on my display) this is by far the longest CD I own.  Damned good value indeed.