I Wish There Was No Prisons 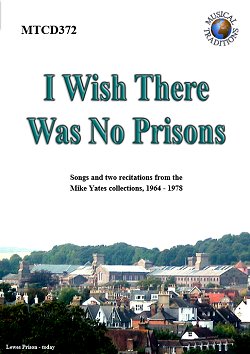 Rod Stradling likes to pack as much as he can on to his MT releases; this one runs to 31 songs and 81 minutes!  His previous release was of the songs collected from Harry Upton by Mike Yates but, even though the space available was stretched in true MT fashion, two items had to be omitted.  What to do about this?  Mike writes “…we decided that a follow-up CD, containing these two tracks, would be needed.  I also decided that the remaining tracks on this CD should be relevant to Harry and his songs.”

A good decision!  Otherwise we would not have his The Banks Of The Sweet Dundee which must rate amongst the very finest of this much-recorded item.

Quite a number of the remaining items come from Harry’s area in and around Sussex.  Personally, these serve to remind me of the many hours spent in the company of Louie Fuller, George Spicer and Johnny Doughty.  It also helps to give a retrospective view of just what fine singers all three were.

The opportunity has been grasped to present first-rate performances by Fred Jordan, George Attrill, Freda Palmer, and just a snatch of Bill Whiting which is enough to convince that here is a considerable singer.  Elsewhere there are performances of folk songs and ditties that will not disappoint those who the album is aimed at.

More that once Rod Stradling has been heard to proclaim that his mission of making available the best of unreleased field recordings of Britain’s traditional singers to the specialist market that he caters for must be coming to an end.  Nowhere in his two most recent releases can we hear the sound of the barrel being scraped.