Unlike the recently reviewed Bismarcks' CD, this is not a 'dance' record.  All the tracks bar one are dance tunes, true, but it's not presented for dancing - there are no dance instructions, sets are not necessarily of dance length or tempo, etc. 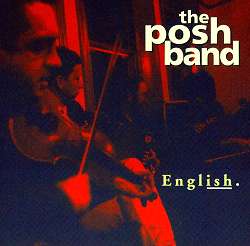 Consequently, few of the comments about the former CD will be relevant here and the two reviews should not be read as being comparable - nor should the two bands be judged, qualitatively, by the content of these reviews.

The Posh Band is a fairly new permanent format, though all the musicians concerned (and a good many others, too) have been playing this music together in sessions for years.  The players are: Simon Ritchie - melodeon, step-dancing and percussion; Ed Caines - fiddle; Sue Bainbridge - piano, mouthorgan and vocals; Ken Lees - banjo, tenor guitar and piano; John Adams - guest piano on two tracks.

The music is, quite simply, a joy to listen to (sound clip) - wonderful tunes, played with bags of energy and bounce ...  The playing has that nice raw edge, almost a roughness, which implies that they care more for the music than for the production ... and just in case anyone misunderstands me - that, in itself, is not a criticism!  Despite this being a studio recording, a DAT machine set up in any of their sessions would have captured something very close to this - in musical terms, at least.

In a way, this results in the only flaws in the performances.  I feel that the band may not have given as much thought as they might have done to arranging and presenting the music for the repeated listening which the recorded medium inevitably encourages.

It might be argued that a traditional performer would not have done this, so why should a revivalist, given that MT has said it will treat both in the same way for review purposes?  The truth is that a traditional performer of the same age as the Posh Band members in 1999 (should such a person exist in England), sharing their understanding of how their audience listens to their music, and having the same control over the final outcome of the record, probably would have considered it.  Most traditional performers I've met, or heard about, were far less naïve and unworldly than we might imagine.  And certainly those who performed regularly before a paying audience (like street singers) were extremely conscious of the techniques they could employ to ensure the best possible audience reaction - and donations!

So,what are these flaws, these mistakes, then?  Just the usual ones which I and many others have made over the years - and will probably continue to make.  You play the tunes as you do in a session or for a dance and they sound great!  Or they do when you play them.  Arrangements?  Do we need them?  Are we trying to be pop stars, fer Chrisake?  This music is too good, too important to fuck about with!  And so it is ... in a performance situation.  But repeated listening means that clever little syncopation you do on the 'B' musics the second and fourth time through - and which the dancers really enjoy - begins to grate when you get it, without any of the performance ambience, time and time again on a CD.  We've all suffered this - music which sounds fine in a session, at a dance, in the studio ... then, listening to the record later, you think "Oh God, that sounds really heavy-handed."

A singer, or a solo player, has far less of a problem.  Anyone worth his or her salt will make those subtle variations as a tune or a song progresses - so that something which is nothing more than 32 bars repeated four times should not sound repetitious.  In a band, the same thing almost certainly happens, but the subtlety of the individual is swamped by the overall sound.  We realise this, and so decide to put in a few 'features' ... but a feature in a 2A:2B tune gets repeated - often four times - so the listener is going "No - don't do that again next repeat - oh, they have!"  If the band decides to only use the 'feature' intermittently, they end up spending too much effort on remembering the arrangement, and the spontanaity goes straight out the window.  We do not live in the best of all possible worlds!

In truth, the Posh Band make fewer of these mistakes than many, but they are there.  The Weymouth Quickstep, a super 4-part jig from the north of England (sound clip), is marred by the repeated 'stops' in the 4th part.  I'm sure I've heard this tune by another name, and without the stops, and I think it would benefit, in a recorded performance, to have them occasionally, rather than always.  The same trick reappears two tracks later at the end of Simon's own splendid composition The Valliant - perhaps the two track should have been further apart on the disc?

Track 9 is two different versions of Buttered Peas - if you have two tunes of the same name it's an obvious temptation to play them together if they're both 32 bar polkas.  Actually, they're played here in an almost hornpipe rhythm, the second one being quite noticeably dotted, and I don't think they make terribly comfortable bedfellows.  James Higgins' and The Villagers are both fine jigs, but the former would have been far more comfortable in D - avoiding the extremely high and squeaky B music and allowing for a nice dynamic shift into G for the second tune.

I thought the piano tended towards the heavy-handed when Sue wasn't playing it, but reference to the notes makes it clear that Ken and John both provide some nicely restrained back-up - it's just that it's a little too far forward in the mix sometimes, whoever's playing.  And the final negative comment is that, for me, step dancing rarely works on record - lacking the visual element.  When you can't see the dancer, it generally has no more musical appeal than the dreaded 'skulls'.

But these are all minor quibbles - the record is a delight and certainly one of my favourites in the genre.  The tempi are slightly quicker, particularly on jigs, than is usual in this part of the world, but this actually makes for better listening - the music never drags.  All the playing is spot-on, but I'd like to make particular mention of Ken Lees - a lovely banjo player who never puts a foot wrong in all the 62+ minutes and 15 tracks.

something I'd not noticed in his playing.  His version of Bob's Ripple of the Teign (sound clip) makes it clear just how much he acquired from the man - and how he's able to play in the style, but without being a copyist ... a lovely track!  And there are lots of other lovely tracks: The Weymouth Quickstep, The Valliant, The Duke of Cornwall's Reel - no, they're all lovely ...

including the final one.  Sue Bainbridge sings Love is Pleasing in a straight, no-frills way that few could fail to be enchanted by (sound clip).  I'm very pleased we are getting to hear a little more of her these days - it's a great voice ... and a super record.  It's available from: 100 Beech Hall Road, London E4 9NX.  E-mail: poshband@clara.co.uk