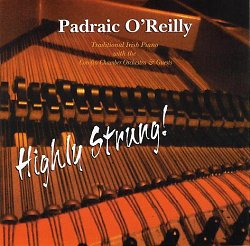 Of Padraic O'Reilly's first CD, Down the Ivory Stairs, Geoff Wallis wrote: Padraic O’Reilly’s piano CD is a breath of fresh air - solo piano recordings of traditional music are thin on the ground.   His sound and style will initially remind you of something from Mícheál Ó Súilleabháin, but Padraic is somewhat deeper into the tradition, I guess, and what we have here is a virtuoso traditional musician whose instrument happens to be the piano, rather than a classical pianist who can play Irish dance tunes when he feels like it.  Well, I wouldn't want to disagree with a word of that summation - and would add that the intervening six years appear to have honed his skills even further.

This is a most enjoyable record, and a truly spendid selection of tunes - indeed, I'm usually thinking "What a great tune" rather than "What terrific piano playing" - and that's exactly as it should be, in my opinion.

From my admittedly biased English perspective, I'm very glad to find hornpipes, barndances, planxties, set dances and slow airs scattered amongst the jigs and reels - such a healthy change from the way things were only a few years ago.  This gives the CD a pleasantly varied musical texture, which is enhanced by Padraic's decision to include some tracks where other instuments take the lead line, and the piano assumes the (more usual) back-up role.  Notable among these is his duet with brother Damien on button accordion, on the slow air Sliabh Geal Gua na Féile.  This is a beautifully judged performance of an absolutely gorgeous tune - although I do prefer my slow airs with rather more rhythmic variation than they demonstrate here.  Interesingly, this is track 6, and for the previous five I'd been thinking that Padraic's playing style owes quite a bit to accordion influence; track 6 confirms it.

Regarding slow airs generally, I love the tension inherent in really good performances of these tunes - that sense of never quite knowing exactly what or even when the next note will be.  The best slow airs are, in my opinion, grand, noble, passionate pieces - and it's no surprise to find that most are based on sean nós songs; sometimes on the performance of a particular singer (as is the case with track 6).  To describe, as here, Ed Reavey's Love at the Endings or Steve Cooney's With a Love that's True as slow airs seems misleading, at best.  True, they are pretty tunes played slowly, but they hardly measure up to the stature of the music that usually bears this title.

However, this is hardly a serious criticism and, for the most part I find this a thoroughly enjoyable, even exciting record.  You can buy it, and hear some sound clips at the Copperplate website: www.copperplateconsultants.com/rrcd004.html