Past Masters of Irish Fiddle Music

Described as 'A collection of Irish fiddle music re-mastered from rare 78 rpm records', selected and edited by Reg Hall, this follows in the footsteps of his earlier compilations for the label, Irish Dance Music and Past Masters of Irish Dance Music. 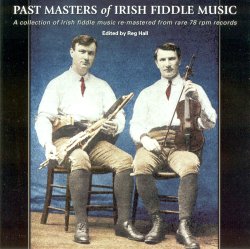 However, its most immediate comparison is to the Rounder label's 1998 compilation, Milestone at the Garden, though there are substantial differences in focus.  Whereas Milestone at the Garden offered a breadth of scope that spanned fiddlers as varied as Denis Murphy, Danny O'Donnell and Seán Maguire while paying a nod to the Sligo masters, Reg Hall's selection is far more restricted.

Firstly, there is a marked Sligo emphasis - no fewer than ten of the album's 25 tracks are devoted to Paddy Killoran, Michael Coleman, James Morrison and Michael Gorman while another two feature Hugh Gillespie, born in Donegal, but heavily influenced by Coleman.

The second slant is early recorded examples of ensemble playing - seven tracks, including the Ballinakill Traditional Players and the Moate and Aughrim Slopes Céilí Bands (all of whom have featured on Reg Hall's earlier compilations).  Apart from the sedate Halpin Trio, this leaves a mere five tracks for the likes of Dubliner Frank O'Higgins (who gets three of them), Donegal's Neillidh Boyle and Kerry's Mike Hanafin.

Naturally, bearing in mind their prolific output, one would expect a leaning towards the Sligo fiddlers (though Milestone at the Garden managed to avoid such).  Reg notes that 'the golden age of fiddle 78s produced few strong recordings of non-Sligo fiddle players, and this anthology is inevitably dominated by Sligo music', but this cannot explain the absence of Danny O'Donnell who recorded a substantial number of 78s for Regal Zonophone in 1939 and 1945

However, the presence of the BTP and céilí band recordings smacks of padding.  Reg's explanation is that these 'have a strong fiddle bias', but this is hardly the case on the Moate's pair of reels Sheehan's / The Travellers, where the accordion of John Joe Gannon is so well to the fore.

Nevertheless, this is still an admirable compilation and graced by a splendidly-illustrated and informative booklet.