Past Masters of Irish Dance Music

In all respects but its title, this is Volume 2 of Irish Dance Music, and indeed Topic describe the earlier disc, TSCD602, as 'a complimentary companion volume'.  You could try asking for your free copy when buying this one, but I fear that they mean 'complementary'. 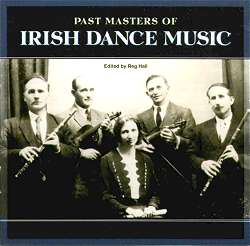 The two discs have many artists in common, and of course they have both been compiled by Reg Hall, and consequently benefit from his encyclopaedic knowledge of the music, and his deep understanding of the historical, political and social contexts, and of the operations of the record industry.  Given the overlap of personnels, it's not surprising that the notes to both CDs have material in common, but the booklet to this one is up from 20 to 24 pages, with the introductory overview increasing from five pages to six, and the notes on those artists who appear on both discs often include additional biographical and historical data.  So we learn, for instance, that 'in more recent times [Pat Roche] taught Michael Flatley of Riverdance fame both to dance and to box'.  A canny combination, in view of what many people would like to do to Flatley in return for what he's done to dancing.

The recordings were made between 1923 and 1949, and have been excellently remastered by Charlie Crump.  Occasional problems of reproduction stem from the limitations of the original recordings; for example, Tom Ennis' credited uilleann pipes on Limestone Rock, one of the 1923 titles, are inaudible, suggesting that their volume presented problems for the acoustic recording process,

and that the Vocalion engineers over-compensated by placing Ennis too far from the horn.  This is a pity, rather than a disaster, since it better enables us to hear the great Sligo fiddler James Morrison going to town on his second instrument, the flute. (sound clip)

As with Irish Dance Music, this CD is notable for its variety of tune families, with polka, highland schottische and highland fling sets alongside the usual jigs and reels; still no waltzes, though, thanks to the preconceptions of the recording industry.  There are some surprising instrumental lineups, too, although nothing as startling as the tenor sax on the earlier CD's Stack of Oat/Shannon Waves by Erin's Pride Orchestra.  There's a clarinet on the tracks by Patrick Killoran and Myles O'Mally tracks, but in neither case is it doing much.  (O'Mally was a swing band reed and flute player, who featured the tin whistle as a novelty in that environment; but he's entirely authentic here, teamed with the Fahey brothers band, and harking back to the house parties his family used to run twice a week 'with sets danced upstairs and downstairs'.)

For my taste, there are a few too many tracks where military style drumming is prominent; the Siamsa Gaedhal band's performance is certainly 'dynamic,' but the crash-bang-wallop of the percussion makes the whole performance too much of a wall of sound.  More dispiriting is to find that the great Eleanor Kane's piano playing is largely inaudible on the Pat Roche track, although this appears to be more the fault of Decca's engineers than of the percussionist.

On the upside, there are a number of titles featuring banjo playing - the skill of which is exceeded only by its elegance.  Here are the three Flanagan brothers, on Rakes of Clonmel, the other 1923 recording included.  At this early date, Joe Flanagan's accordeon shows the influence of the German-American John J Kimmel,

an unlikely virtuoso of Irish music; Mike was one of the first Irish musicians to play tenor banjo, but does so as to the manner born; and Louis fills out the harmonies on the only double-necked harp-guitar ever to make its home in recorded Irish music. (sound clip)

The Ballinakill Traditional Dance Players, who had a track on Irish Dance Music, are more heavily featured this time, with two titles under their own name, and one by their flute players, Stephen Moloney and Tommy Whelan.  The band also graces the front cover a second time although on this occasion it's without the sternly proprietorial presence of Father Tom Larkin, who brought the musicians together as part of his personal crusade against 'jazz' dancing (and, of course, all that it was thought to entail by way of moral and cultural corruption.)  The good father's drilling of the band in agreed versions of their tunes doesn't always seem to have done the trick; Moloney and Whelan have terrible intonation problems at the start of The Pipe on the Hob, but it all comes right in the end.  In any case, there's more to good dance music than technique.  The Ballinamore Ceilidh Band's flute players have intonation problems too, and on top of that there's 'a slight hesitation in the tune change-over and an odd choice of chords on the piano'; but it's still a performance of fabulous wildness and drive.  Similarly,

one can only agree with Reg Hall's wish 'that current run-of-the-mill Irish music had half as much life and character' as Frank Fallon's Orchestra, which 'though relatively straightforward…has great bounce and dance rhythm'.  Indeed, and isn't it being driven by spoons, rather than a drummer, as listed? (sound clip)  It doesn't greatly matter, either way, and it's certainly a small mistake by comparison with Celtic's original labelling of Liverpool Hornpipe/Red Haired Lad as Butterfly Hornpipe (English folk dance)!

There's not much point in discussing the merits and (much rarer) drawbacks of each track in turn; I trust I've made it clear that this CD is a worthy companion to its predecessor.  It nevertheless seems important to note that The Maid Behind the Bar is a rare opportunity to hear - although not very prominently - the highly regarded but little recorded fiddler Larry Redican alongside the stunning flautists Eddie Meehan and John McKenna.  It would also be remiss not to draw attention to both the technical skill and the emotional depth of Séamus Ennis' performance on the uilleann pipes, which transforms dance music into highly personal artistic expression.

I hope that making this sound clip available to more expert ears than mine will resolve the conflict between the set list given on the cover and that in the booklet; but I had better stress that the quality of the music, both here and on the disc as a whole, is a much more important aspect of the project. (sound clip)