One Night in Bremen (Live) 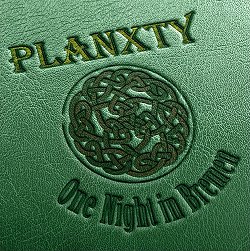 Planxty was one of the most significant bands to emerge in the early 1970s folk revival.  They were initially formed following a session to record Christy Moore's second LP and produced three LPs of contemporary and traditional songs mixed with tradition irish dance tunes, with slightly changing line ups between 1973 and 1975.  Rumours that Planxty would reform started to circulate following the appearance of all four original members in different ensembles at the 1978 Ballisodare Folk Festival.  In early 1979, the rumours were confirmed when they played a small venue in Dublin before the band finally announced a mammoth European tour starting at the Hammersmith Odeon in April and ending up eight countries and 45 gigs later back in Dublin in June.  The band recorded the LP After the Break after just a week off at the end of the tour and it was released later in 1979.

This concert, given on 24th April 1979 at Bremen University, was broadcast on German radio and has now been released by MiG records (MiG being Made in Germany).  Clocking in at around 60 minutes, it's a fantastic reminder for those who saw the band on this tour; and a taste, for those that didn't, of what the buzz was all about.

The original four members, Christy Moore, Andy Irvine, Donal Lunny and Liam Og O'Flynn were joined by flautist Matt Molloy who had been playing with Lunny in the recently defunct Bothy Band.  Molloy and O'Flynn had a long musical and social connection from the Dublin session scene.  The pleasure of playing together again and playing mostly new material is palpable in the way the band interact on stage and the audience are whipped into excitement by the power of the music and songs.  There's a confidence in their playing that comes from years of hard touring that had earned them a reputation for excellence among folk fans and a wider audience.

Both O'Flynn and Molloy are acknowledged masters of their respective instruments and the duets are simply stunning.  Molloy's bubbly finger work contrasts and complements O'Flynn's tight piping tricks and you can hear the rest of the band enjoying the sparks flying between the two tune players.  Molloy and O'Flynn played a set at the end of June 1979 at the Causeway Festival in Portrush, County Down but a planned duet tour fell by the wayside when Molloy accepted an invitation to join the Chieftains.

The opening song on the CD, The Pursuit of Farmer Michael Hayes suggests that the opening set of reels starting with The Lady on the island has been missed from the broadcast as it is the only track from After the Break not on this CD.  Christy Moore's singing on this and The Good Ship Kangaroo is in his typical robust style and it contrasts well with Irvine's more contemplative Rambling Boys of Pleasure.  Irvine has two other higher tempo songs as the two vocalists alternate their songs.  The songs are separated by sets of tunes; slip jigs, reels or jigs, all now familiar from the LP and the High Kings of Tara LP that featured three tracks that didn't fit on the LP.

The band heads for the end of the set with Irvine's Balkan fusion piece Smeceno Horo where Molloy's flute is especially atmospheric and the show climaxes with the combination of the Raggle Taggle Gypsies and Tabhair dom do lamh that had opened the Prosperous LP in 1972 and featured on the first Planxty LP.  Molloy mirrors O'Flynn's harmony lines around Christy Moore's vocal and when the change into the tune comes, the crowd go wild.  The band return for an encore of Moore' s Nancy Spain and a final set of reels.  The crowd go home happy, having seen a band on top form.

The recording is of high quality and the mix is generally good and the cross rhythms and harmonies on the bouzouki and mandolin are clear although the mix has a little too much flute compared to the pipes.  The packaging is pretty basic, with little or no information, other than a short note from Andy Irvine remembering the tour and a track listing.  A couple of tunes are misidentified in the track listing; Ride a Mile is usually known as The First Slip and it's listed as such on the High Kings LP.  Lucky in Love is actually The Bloom of Youth, the second tune that John McKenna recorded with Lucky in Love in 1934.  This error follows the original LP and it's not uncommon for players to mix up the names on a pair of tunes from an old 78.  The Humours of Carrigaholt is usually called Stay another While and O'Flynn recorded it on his Fine Art of Piping CD in the early 1990s.

There are a few live recordings of Planxty available, notably a bootleg circulating of the band from 1980, and the 2016 retrospective Between the jigs and reels which includes video recordings from gigs from 1972 to 1982.  The band reformed for one last time in 2004 and this was captured on DVD and CD, but 1979 was a unique time in the band's varied life and this CD captures all the verve and excitement of that time.

It's a shame the CD was released just two weeks after Liam O'Flynn's death as the media has been, rightly, preoccupied with paying tribute to the piper.  As we mourn his loss, the opportunity to hear him doing what he did best, on stage with his friends, should not be missed.  Highly recommended, the CD is available from Claddagh records and surprisingly also from Amazon.