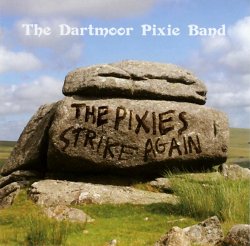 There's a sort of convention which holds that the best art is timeless: this is true here.  I remember seeing Bob Cann's Dartmoor Pixie Band playing in a village hall, somewhere on Dartmoor, back in 1966.  Instead of Rob Murch's classic English banjo, they had an electric Hawaiian guitar - but apart from that, the band sounded much the same as it does now!  Indeed, you could say that The Pixies Strike Again doesn't sound at all like a record made in the 21st century ... and yet it is.  Doubly odd is the fact that it doesn't even sound all that like the Moor Music Trio, as released by Veteran in 2000.

No, this is a band which plays as it always has done - and to an audience which dances at it always has done.  I was amazed that Bob Cann managed to 'teach himself' to play and call dances at the same time (a task most melodeon players will tell you is almost impossible - speaking at all is extremely difficult), until I realised that the Dartmoor dancers don't really need a caller - just a few brief reminders of the main points of the dance.  Seven of the 17 tracks on this CD were recorded live at dances, yet Sarah Bazeley is rarely heard saying more than a dozen or so words of explanation!

And the music is lovely - jaunty, sprightly, funny even.  As with Dan Quinn's Duck Soup, it's difficult to listen to without a big grin on your face.  Cyril May's drumming is out of another era, and Rob Murch just gets better every time I hear him.  But what I find most impressive is the way the musician called Mark'n'Jason manages to play that melodeo'n'accordion instrument.  Truly, it's almost impossible to believe that there are actually two separate individuals playing two different free-reed boxes - particularly when one of them's a push-pull instrument.  'Bred in the bone' comes to mind ... Mark and Jason's grandfathers (Bob Cann and Jack Rice) were musical mates in the earlier years of last century!

I could, once again, rehearse the argument about the dubious point of a dance band making records which are set up to be danced to, when the band itself would far rather that dancers worked to live music - but there's no need ... just sit back and enjoy the Dartmoor Pixie Band.  You won't regret it.