The New Book of Pirate Songs 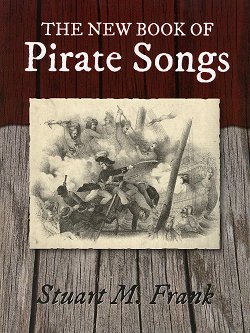 Camsco Music is a small New Jersey concern run by Dick Greenhaus which, among many other things, sells Musical Traditions CDs in the US.  One of its recent activities has been a move into book publishing - but in a rather innovative way which I admire, in that it makes use of modern printing processes which keep down costs, both for publisher and reader alike.  Back in 2009 Dick alerted me to his imminent publication of Bronson's Traditional Tunes of the Child Ballads, the 4-volume epic work, which I feel is far more interesting than Child's original.

But what particularly interested me was the fact that UK purchasers wouldn't have to pay the hefty shipping charges associated with lugging 5Kg of paper across the Atlantic, or wait for weeks for it to arrive - because it was printed (for these UK purchasers) as a print-on-demand item, in Milton Keynes!  Since then, their output has increased, to include: The English and Scottish Popular Ballads - Child; The Singing Tradition of the Child Ballads - Bronson; The Ewan MacColl Song Book - Seeger; Sea Songs of Cecily Fox Smith - Ipcar; and now this sea song book about pirates.

Like ghosts and witches, pirates are, nowadays, the stuff of children's stories - unless you happen to be sailing round the Somalian coast.  But is the Disneyfication of pirates such as Captain Hook, Long John Silver or Jack Sparrow any worse than the Victorian pirate ballads written for the drawing room or, indeed The Pirates of Penzance?  This book is not, as the author explains, about pirates as such, but about the songs that portray them.  It includes parlour songs and broadside ballads, as well as the few examples of traditional ballads that deal with pirates.

The author, Stuart Frank, is Senior Curator at the New Bedford Whaling Museum and has written a number of books about the sea, including the recently published Jolly Sailors Bold: Ballads and Songs of the American Sailor.

1  This is a second edition of the Book of Pirate Songs that he published in 1998 and contains 22 additional songs, the majority of the additions being in the category of 'Victorian Parlo[u]r Songs'.  Many of the sources for the songs are British.

The book is split into Five sections: 'The Old Ballads', 'Broadside ballads', 'Women in Buccaneers' Clothing', 'Victorian Parlor Songs', and 'Lyrics from Popular Songsters'.  The final section is an appendix of 'Forebits and Afterthoughts' which it includes, for example, the song Yo Ho Ho and a Bottle of Rum, based on the fragment written by Robert Louis Stevenson for Treasure Island.  For most of the readers of this review, I suspect that the greater interest will lie in the 32 songs which comprise the first three sections.  Franks has gone into the background and sources of the songs to some depth and his notes on the songs are interesting and comprehensive.  He has included songs from a number of American sources that will be unfamiliar to readers on the Eastern side of the Atlantic, such as the logs of whaling ships.  He includes Child and Laws numbers but not Roud numbers.

There is much of interest in the book and an American perspective often helps with information that would not necessarily have been known here.  Over the years I had wondered, for example, about the Flying Cloud being a '... clipper ship hailing out of Baltimore', since what I had thought of as 'clippers' post-dated the era of slave trading.  Now I know that the Baltimore Clippers of the early 19th Century were a class of strong, fast ships, much favoured by shady traders - though Frank goes on to point out other technical inconsistencies in the song.

With the help of the notes in the main body of the text, the sources and notes at the end of the book, and the massive bibliography, there is plenty of opportunity to explore further.  I was drawn towards The Bold Pirate on page 58 (Laws K30, Roud 984), which is described as a rare ballad, collected in Maine, New Brunswick, and Nova Scotia.  The text was recorded by Fanny Eckstorm and Mary Winslow Smyth from three old ladies in Maine.

2  The source notes also refer to the version collected in 1905 by the Hammonds from Joseph Elliott who lived at Todber, in Dorset.

3  What intrigued me about this was that Elliott was known to have spent much of his life fishing off the Newfoundland coast and could have heard the song in that part of the world.  His magnificent mixolydian tune, though, is very different from that given by Franks.  It is suggested in the notes that the song was originally a British broadside, though Franks was not able to locate it.  This demonstrates the unfairness of publishing nowadays, since the Internet has now made it possible to get to information not available to an author at the time he wrote it.  There is, indeed, a Scottish broadside in the Bodleian collection, which is clearly the ancestor of both the Maine and Dorset versions.

The book is published under Dick Greenhaus's imprint, Camsco, and is a print-on-demand project with the facility to produce the books wherever Lightning Source have a plant - in this case Milton Keynes.  So you don't have to wait weeks for delivery.  The print quality is good and the book is available with either soft or hard covers.