If you are one of the very many who liked the 1986 Frankie Gavin and Paul Brock record ”můs do Joe Cooley (Gael-Linn CEF CD115), then I think I can promise you that, like me, you will enjoy this present offering very much too.  Indeed, if you share my preference for music which sounds a bit 'old fashioned', you might find that you like this one even more. 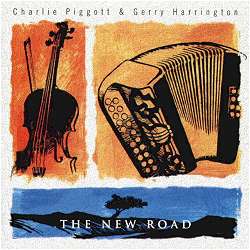 Both share the lure of wonderfully relaxed, easy, tuneful playing - with no technical flash evident - of a set of very pretty tunes. (sound clip - The Rover Through the Bog)

I had heard of, though not consciously heard, Charlie Piggott - he was the banjo player with De Dannan who ended that career when he got his (left) hand slammed in a van door.  Undaunted, to took up melodeon (which you play with the right hand - in Ireland they use the basses very sparingly),

and must have been a mighty banjo player indeed if he was any better on it than he is on this, his second instrument. (sound clip - SeŠn ” Duibhir an Ghleanna)

Gerry Harrington was a completely new name to me, but if his playing here is anything to go by he deserves to be much more widely known.

He has a truly faultless tone - very even, full and vibrant - and is an extremely dexterous player ... even the triplet notes stand our clear and sharp, and his timing is just gorgeous. (sound clip - Kiss the Maid Behind the Barrel)

More important by far is the way in which the two musicians play together ... and the only word to describe that is 'perfectly'!  Neither takes undue limelight when the are playing together, and Gerry's use of the drone and chorded passages as backup to Charlie's lead is extremely striking.  Not only do they complement each other superbly, but their approach to the music is, to these ears, quite faultless.  Few tunes are taken at anything above 'rather slower than usual', and even when playing quite fast, they never sound hurried.  Both manage to generate that indefinably 'old fashioned' tone - loads of texture, but never rough - which I find so much more satisfying than the thinner, purer, almost conservatoire tone so often evident on recordings made in the '70s and '80s, no matter how good the music.

Mention should also be made of the three backup players.  The way the first hearing brought back memories of the Joe Cooley record made me wonder if the piano player wasn't the great Charlie Lennon, but no - it's Eugene Kelly, who was also responsible for the recording and mixing.  And a superb job he's made of all three.  SeŠn ” Loingsigh adds a very laid back bouzouki on a few tracks, and manages not to sound anything like Donal Lunny; Ringo McDonagh adds understated bodhrŠn here and there - a refreshing change from so much that we've had to put up with over the past couple of decades!  All three musicians judge their contributions admirably - actually contributing, rather than distracting one's attention from the music.

My friend Ron Kavana, who I originally asked to review this CD, told me that I really should do it myself since the playing style would be so much the sort of thing that I enjoy.  How right he was!

This record is available in the UK from Copperplate Distribution - contact details on our Useful Addresses page.