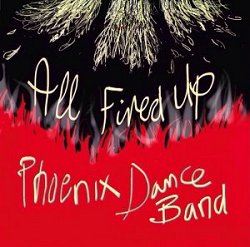 It's been some 10 years since Phoenix released their first CD after the fire (FBR001) which introduced the session world to some rather fine tunes.  In that time Martin Brinsford has left, but his place has been more than ably taken by Steve Harrison, whose harmonica playing is central to the Phoenix sound.

The new recording offers us 15 sets of 'less-than-well-known tunes' (of which more later …) arranged in sets of three or two, usually played twice through and change … which I found a little disconcerting.  I found that I was just getting into the groove (as the young people used to say) of a tune when suddenly it would disappear, another equally lovely one taking its place.  All well and good, but the caller in me wants at least three times through!  The only track to get solo billing is Pearl O'Shaughnessy's Barndance (7) and it's a delight.  I don't know who Pearl was, but she certainly knew a good tune when she heard it … as do Phoenix.

Given the provenance of the band, we should not be surprised at the musical melange offered here.  Apart from England, Scotland and Ireland (the lack of a Welsh tune precludes me from making any post Brexit UK related comments) the U.S.A, Italy and Scandinavia are also represented … but all given the Phoenix stamp.  Vamp piano, twin fiddles sometimes in harmony sometimes in unison, quietly restrained gob iron, all underpinned by rock solid melodeon.  All here have played for dancing (and danced … which helps …) for a very long time, and it shows.

Stand out tracks for me are Reunion/Sarah's/Fox and Geese (4), the aforementioned Pearl O'Shaughnessy's and Colomb/Diamond/Squirrel (14).  But if I had to save one track from the waves it would be Laddie wi' the Plaidie/Will Atkinson's Schottische (13).  It's an object lesson in how to play for dancing.

Now, about this 'less-than-well-known' business.  I found I knew quite a lot of them, and others occasioned the "Oh, that's what that one's called is it?" moment.  I've obviously known and played with members of the band for too long.  Don't let that stop you buying this.  You won't regret it.