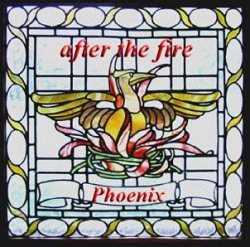 Anyone reading this review, noting the personnel involved and seeing my name at the bottom will know that I was biased in favour of this CD as soon as I took it out of the envelope.  English dance music played by a band featuring Rod Stradling and Martin Brinsford.  Do I like it?  Yes!  The word 'featuring' is important here.  There is no hogging the limelight for anyone.  Rod's melodeon, the fiddle playing of Mike Pinder and Fran Wade and the outstanding harmonica playing of the ubiquitous Martin Brinsford blend together to make a most satisfying whole.  And no less important is the accompanying vamp piano playing of Kevin Bown (who sensibly does exactly what he is supposed to do - accompany) and I'm a sucker for vamp piano.  I am pleased to note that a real piano was used for this recording.  The downside here is that a real one can rarely be found for gigs.

Phoenix has deliberately set out to find unfamiliar tunes, and there are some gems here.  The opening set of Smiling Dickie's Hornpipe / Trip to the Bar / Brown's Reel is superb, as are Holywell Hornpipe and Lord Zouch's Masque.  The new rubs shoulders with the old and it is a pleasure to see

Scan Tester's Stepdances along with the Gloucester Hornpipe and tunes from Tom Anderson and Stephen Baldwin.  Tunes Irish, Italian, French-Canadian and Danish are all thrown into the mix.  For me, the album climaxes two tracks before the end with the wonderful pairing of Paganini's Hornpipe / Gavin Atkin's Hornpipe, two first-rate tunes played perfectly. (sound clip)

The musicians here are old hands at this sort of thing and don't disappoint.  The music is played at a sensible pace, savouring the tunes, and in a relatively simple and straightforward way.  True, there are the occasional forays into 'fiddle seconds' and harmony playing, but this in no way detracts from the overall excellence of the playing.  I have one or two minor niggles.  I don't personally much like the Danish tunes (I recognise this as my problem) and the band does seem to be on its best behaviour, as if one or two of the sets hadn't been played in as well as they might.  But again, this hardly detracts from the general enjoyment.

Sad to say, traditional music played well is becoming increasingly hard to find, so this CD is most welcome.  This band clearly enjoys playing together and has a homogenous style - everything, be it English, Italian, Irish, Danish or French-Canadian, emerges from the scrambler as 'Phoenix Music' - and that is exactly as it should be.