Songs and Ballads from Perthshire 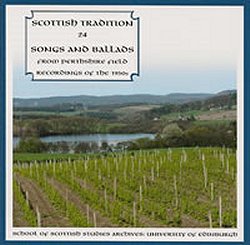 In 1954 Hamish Henderson met a young journalist called Maurice Fleming.  Learning that Maurice was from Blairgowrie, Hamish asked him if there was any chance that he might try to find the author of a song that Hamish had recently come across.  The song was The Berryfields o Blair and it wasn't long before Maurice Fleming was knocking on the door of Belle Stewart, one of the most important traditional singers to have been discovered in the latter half of the 20th century.  Belle had, of course, composed The Berryfields o Blair and she was soon singing the song to Maurice.  But that was not all.  Maurice discovered that most of Belle's extended family also sang songs and told stories, and so Maurice quickly contacted Hamish Henderson who arranged for the School of Scottish Studies in Edinburgh to provide Maurice with a tape recorder so that he could carry out fieldwork in the Perthshire berry fields.  When the tapes were sent back to Edinburgh Hamish Henderson was amazed to hear so many songs and ballads that he thought had disappeared from the oral tradition.  One song, a version of The False Knight on the Road that was sung by Bella Higgins, Belle Stewart's sister-in-law, really amazed Hamish, who realized that if he was to find such material, then he too had to spend more time with Scotland's travelling people.  (You can hear Bella's The False Knight on the Road on the CD The Muckle Sangs, Greentrax CDTRAX9005, an album that also contains recordings by many other great Scottish Traveller singers.)  The CD Songs and Ballads from Perthshire offers a selection of the recordings that Maurice Fleming made in the 1950s and, as expected, it features the singing of some remarkable Traveller singers.  (There is one exception, namely Tommy Bonthrone, a non-Traveller, but more about him later.)  Some of these recordings, which were made over fifty years ago, are perhaps not of the greatest fidelity.  But, despite this, I am pleased that they have been issued, because there are some hidden gems here, and now, at last, we can all hear just what it was that so excited Maurice and Hamish all those years ago.

Belle Stewart and her daughter Sheila are possibly the best known singers to be heard here, and I have to agree with Maurice Fleming when he writes, 'I have always been of the opinion that, but for Hamish (Henderson's) discovery of Jeannie Robertson, Belle would have received greater acclaim than she did.  It was her fate to be always overshadowed.'  Well, I for one never ranked Belle as anything less that Jeannie when it came to singing and I am firmly of the opinion that Sheila is, today, the equal of her remarkable mother.  Many years ago Sheila sang her version of Jamie Foyers to my father, who had fought in North Africa and Italy during the war.  It was the only time that I recall seeing my father cry.  Here we have Jamie Foyers sung by Willie McPhee, a distant relative of Belle's husband, Alec, and it is just as moving.  If you want to know more about Willie McPhee, then take a look at Sheila Douglas's excellent biography, Last of the Tinsmiths, which chronicles the life of a remarkable man.  And there is also a track from Bella Higgins, Late Last Night I was Asked to a Wedding, a song that I first heard being sung by Belle Stewart, who probably learnt it from Bella.  One song that Belle sings here, Frank and Ruby, is one of her own songs, written about her good friends Frank and Ruby Kelbie, who lived in Banff but who often visited Blairgowrie, and Ruby can be heard singing a good version of Banks o Red Roses here.

Jock White, who was camped in the berry fields when Maurice Fleming came across him, gives us a good version of the ever popular ballad of Tifty's Annie, while his 13 year old daughter Betty (Dolly) White provides a beautifully sung Green Bushes.  It seems that quite a number of the young Travellers at Blairgowrie liked to sing.  There is also a recording of The Golden Vanity on the CD that is sung by 10 year old John MacDonald and, elsewhere, we can hear recordings made of a youthful Angela Brazil who was stopping at Blairgowrie with her family when Hamish Henderson and Peter Kennedy met her in the '50s.  (Musical Traditions The Brazil Family.  Down By the Old River Side MTCD345-7).  Cecil Sharp said that he was surprised to find youthful singers in the Appalachians when he was there during the period 1916 – 1918.  I suspect that the Appalachian settlers lived in close family groups in isolated locations and that all members of these groups would be entertained by songs and stories, and the same, I think, can be said of the Travellers, many of whom lived in close proximity to one another.

Charlotte and John Higgins were an elderly couple who, like the Stewarts, had settled in Blairgowrie.  Jean McLern (Roud 23392) is a unique fragment of a murder ballad, sung to the tune of McCafferty, which Charlotte learnt from her mother.  Is this, I wonder, a local song?  According to Steve Roud this is the only known version of the song and it surely deserves some research.  Charlotte's version begins: 'Jean McLearn it is my name/I brought myself to both grief and shame/For the murder of my baby dear/I got transported for seven long years.'  Who, I wonder, was Jean McLearn?  And just what was her story?

Susie Pirate (Lord Bateman) is, again, a fragment and is worth comparing with the version that Bella Higgins sings on The Muckle Sangs CD.  Charlotte must have known Bella, because her version of The Lowlands of Holland is similar to the version that Bella also sang.  (Bella's version can be heard on the CD Hamish Henderson Collects, Kyloe 107) and I suspect that they must have shared a number of extremely rare songs and ballads.  On the other hand In a Garden a Lady Walking, sung by John Higgins, is a version, and a good one at that, of an extremely widespread song.  Gavin Greig collected no fewer than twenty-eight versions of the song alone!

When I was working on the CD Hamish Henderson Collects – Volume 2 (Kyloe 110) I came across some of Hamish's recordings of Martha Reid of Birnam, and I was only too happy to include her version of the song Falkirk Fair on the Hamish Henderson CD.  A different recording of Falkirk Fair can also be heard on Songs and Ballads from Perthshire along with some splendid versions of The Elphin Knight, The Banks o Airdery O, I'll Cut off My Long Yellow Hair, The Farmer's Curst Wife and Lord Randal.  I'll Cut off My Long Yellow Hair is a fragmented version of the ballad The Famous Flower of Serving Men and shares lines with the fragment that Belle Stewart also knew, although Martha's tune is different from the one that Belle sang.  It is also rather disconcerting to hear Martha's fine set of words for Lord Randal being sung to the ubiquitous Villikins and his Dinah tune!

Elsewhere on the CD we find two versions of The Golden Vanity, one sung by Martha Reid's grandson, John MacDonald, who I mentioned above, and another sung by John Reid, presumably another of Martha Reid's relatives; and there are two versions of The Tinker's Waddin sung by two other Travellers, Willie Townsley and Stewart McPhee.  Was Willie Townsley, I wonder, related to Mary Townsley who can be heard singing a version of Young But Growing on the album There is No Eye (Smithsonian-Folkways SFW CD40091)?

Finally, there are three songs from the singing of Tommy Bonthrone, a non-Traveller who, when Maurice Fleming met him, was working near Blairgowrie.  I must say that I was touched by the notes about this singer and the following is, I think, worth repeating.  'Later I learned of his strange, sad upbringing.  Orphaned at an early age he was given no choice but to work on the land.  It seems he was declared 'mentally defective' and as such was often expected to work only for his keep until at last he insisted on being properly examined, when he was proved to be of normal intelligence.  Singing was his antidote to the unhappiness of his earlier years and he loved to entertain a willing audience.  He knew all the popular bothy ballads and relished comic music hall songs.  He also had a penchant for Victorian ballads which he delivered with great style.'  We often speak about the power of music, sometimes only paying lip-service to the phrase, but here was a real example of just how music and song can uplift the spirit and keep body and soul together.  I especially like Tommy's version of the poignant Dying Ploughboy, sung to a variant of a tune that has often been used for the song Barbara Allen.  In fact, Tommy's other two songs are also sung to well-known tunes.  The Boys of Bayview, an East Fife Football Club supporter's song, is sung to the tune of Galway Bay, while the words to The Flower of Strathmore are carried on the tune The Road and the Miles to Dundee.

Songs and Ballads from Perthshire is a tribute to the men and women who kept so many fine songs alive, and also to Maurice Fleming, who recorded them for posterity.  And let us not forget the people at the School of Scottish Studies at Edinburgh University, who have preserved these recordings in their archives.  This is volume 24 in the School's 'Scottish Tradition' series.  Let us only hope that there will be many more such volumes in the future.