Silvio Peron is, according to my source, "a master of the style and repertoire of the Occitan traditional dances in the Cuneo Valleys (Piedmont).  The record is almost the complete encyclopaedia of that repertoire".

The Occitan culture of the Languedoc spills across the Maritime Alps into this southwestern corner of northern Italy, and the older people still have much of the language of the troubadours - the langue d'oc - in their dialect.

Interestingly, most of the dialects contain no word for 'gentleman' - someone deserving of particular respect is adderssed as Barbo (Uncle) - even the priest! 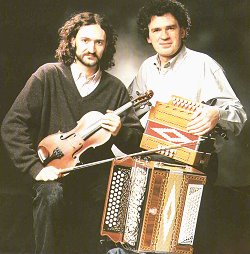 Silvio Peron plays two-row accordion and the older partially chromatic 'semitoun' accordion (sound clip - Courento), and Gabriele Ferrero plays fiddle.  Neither are natives of the valleys but both have specialised in the music for almost 20 years and are accepted as modern maestri.  As one would always hope in such circumstances, they are both clearly superlative players who,

nonetheless, employ their virtuosity in the service of the music, rather than as an outlet for an inflated ego (sound clip - Bouréo viéio).

The musical tradition is centred mainly around the dances, which remain an important part of village life, being particularly used in wedding and conscritti parties - so this is a tradition which has never lapsed, though it was sorely eroded by the popularity of the liscio ballroom music in the late nineteenth century, and by rock and pop in the twentieth.

This is, of course, dance music played in a studio, and one is often worried that - in these circumstances - some of the drive and spontaneity of a live performance will have been sacrificed.  As if to prove me wrong, track 12 was recorded live at a dance - and it was only the slight ambient sound at the start which sent me to the booklet for confirmation (reaffirmed by the applause at the end).  The live music sounds just the same as the studio tracks.

There are local versions of tunes from further afield to be found here, but the greater part seem to be little known outside the area (in my limited experience).

It's very definitely a 'European' music rather than a Mediterranean one, and as such, sounds familiar yet foreign - rather than outlandish - and there are some lovely tunes to be heard here (sound clip- Giga).  Highly recommended.