O Am go hAm - From Time to Time 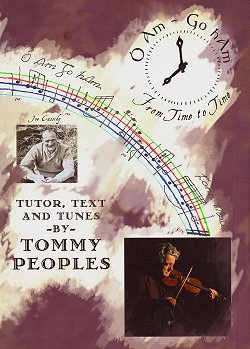 Tommy Peoples is one of the finest fiddle players ever to put bow to fiddle.  Born in St Johnston, Donegal, he lived in Co Clare for over 30 years.  He is now back in his native Donegal.  His playing is a unique blend of the style he grew up with, influences from Clare and Dublin and his own creative genius.  In this book Tommy gives a tutor for fiddle and 130 tunes composed by himself with stories and background to each tune.

The tutor takes up the first 120 or so pages of the book.  Tommy starts with the basics of musical notation and keys.  He pays little attention to the variety of modes that seem to obsess some tutors and the book is all the better for it.  Tommy takes a simple approach to bowing for the beginner suggesting the use of an up or down stroke for each note until some fluency is achieved.  The reasons are explored in the way triplets and rolls are introduced into a tune, which may become harder to achieve if poor bowing technique is employed.  Tommy even explains the effects of "bow as boss" and the misplaced emphasis on the off-beat that poor bowing can cause - an exaggerated syncopation that seems sometimes too common among younger players.  Notes on tone and the proper set-up of the fiddle supplement the basic dos and don'ts of good technique.  There is a wealth of technical detail that will keep learners and experienced players alike busy for a long time.

For non-fiddle players the beauty of the tutor is the way Tommy suggests alternative ways around sample phrases, illustrating the subtle variation that is the essence of good Irish music.  Quite often Tommy turns a simple tune into something completely new by simple but creative variation; many of the early tunes are presented twice, once as a basic melody, secondly with variations.

Sometimes, as with the setting of the Monaghan Jig, Tommy simply resets the tune into something that is a real pleasure to play, and in his own words renovates, decorates and makes the tune lived in.  When Tommy speaks of what the music means to him; the community, the joy and sorrow, and the appeal to ears, heart and feet, it's no wonder he encourages the student put their own fingerprint over everything they play.

Tommy is well known for shifting the key of tunes up or down for effect and several of the examples take the student beyond the simple D and G of most session tunes and he includes examples in C, F, A, B flat and E major as well as their relative minors and takes the student into the second and third positions.  Later in the compositions section he acknowledges that some players will put his tunes into the easier keys so an F major composition like Black Pat's is often played in G major.

The second half of the book is given over to Tommy's own compositions, reels, hornpipes, jigs, waltzes and even songs and airs.  Some of these tunes, The Green Fields of Glentown, Grainne's Jig and The Cosa Mulligan have been in circulation for over 30 years, and a wider selection featured on Tommy's wonderful CD The Quiet Glen released in 1998 and on Waiting for a Call released a few years later and these too have also started to blend into the modern repertoire.

Like Paddy Fahy and Paddy O'Brien or Richie Dwyer, there's a definite finger print on Tommy's tunes.  The first striking feature is that they are all at least three part compositions, and secondly the tunes often run over the full range of the fiddle from low G to high B and sometimes beyond.  There are idiosyncratic intervals, characteristic octave leaps and cascading triplets particularly in his hornpipes.  Like Fahy, none of the tunes are easy, but the rewards are well worth the effort.  For the non-fiddler, there is also the challenge of transposing some of the tunes into more finger friendly keys.  Tune names reflect Tommy's wide family and friends, locations in his native Donegal as well as memories of Clare.  What greater thanks could Tommy give to the publicans and musicians who have shared his pleasure in playing than to be honoured through a piece of music bearing their name.

A few comical or unusual incidents are also remembered in the tune titles.  The book takes its cue from a whimsical re-imagining of the fairy folk who gave Neillidh Boyle his fiddling genius before Tommy was even born.  He calls these two little men Oam and Goham and celebrates them in a pair of strathspeys.  The Irish "O Am go h'Am" means from time to time or "occasionally" and there's a suite of air, jig and hornpipe to remember the magical time that may never come again.

Tommy has always appeared a very quiet and reserved man, happiest in small company but at times he unburdens himself with deeply personal issues.  The death of his son Tommy, the distress of an American musicologist claiming composition of Grainne's jig for Joe Derrane and refusing the back down when told otherwise are covered in great detail.  Happier times are also remembered.

The book is lavishly illustrated with photos, and all the music is in Tommy's own hand.  Occasional drawings and cartoons, sometimes on the sheet music itself, add to the personal touch.  Tommy has not been well for a few years and he has put a lot of his energy into this book as his playing in public is very much curtailed.  The book stands as a wonderful tribute to a man whose life has been driven by a love of music and it will provide enduring pleasure to all who read it.  Any one who has ever met him, or shared a tune with him, or marvelled at his creativity would be proud to own this insight into a unique musician.

Available from Tommy's own website http://www.tommypeoples.ie/ where a signed copy can be obtained, and a taster of Tommy playing a small selection of the tunes is also included, otherwise it's available from Custy's shop at http://www.custysmusic.com