Sometimes tracing the provenance of an Irish traditional recording can be a Sisyphean task, and take this Tommy Peoples album as a particularly arcane example.  According to the date on the CD itself, it was issued by the Galway-based GTD Heritage Recording Co in 1993. 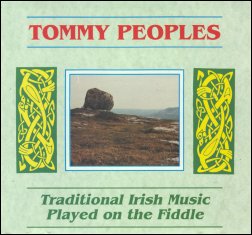 Yet, when Tommy's last album, The Quiet Glen, was released in 1998 it was generally hailed as his newest recording for more than a dozen years.

Regarding the GTD release, according to Tommy himself, "This was recorded by Seán Walshe in his attic studio in Galway in '82.  At that time he had a small cassette distribution going in Clare, Galway and Mayo.  I could not say if he is involved in GTD Heritage, or if it was sold to them.  The accompaniment was added afterwards.  Carl Hession on piano, but not sure of the guitarist, maybe Seán Walshe."

Of course, this begs even more questions, such as, firstly, the exact date of the overdubbing and, secondly, why this was even done.  A fine pianist Carl Hession might be (and the mystery guitarist is not bad either), but such studio tinkering runs against the spirit of the original solo unaccompanied recording.  Equally, once aware that it was a later addition, it's possible to hear the cracks, especially on the King George IV strathspey.  A Seán Walsh does figure extensively in the GTD catalogue, but, predominantly, as a Country and Irish singer.  The final implication is that Tommy had no involvement in this release beyond laying down his own unaccompanied tunes.

There is a further mystery.  Track 10 features a duet on the reels The Bells of Tipperary with Tommy's daughter, Siobhán.  According to Caoimhín MacAoidh's Between the Jigs and the Reels, which was published in 1994, Siobhán was "born and raised in Clare just over twenty years ago" which would place her in her late twenties now and about ten or eleven in 1982 when this recording was apparently made.  All well and good, but their rendition of The Bells, relatively simple tunes, features some quite remarkable harmonisation and both fiddlers clearly evince the Peoples hallmark, the crisp triplets.

Ah, well, does it all matter in the end?  Well, yes and no.  Knowing the date of a recording is essential in order to trace a musician's development.  Here, Tommy's on typically ebullient form throughout, pert and perky on the reels (such as The Star of Munster and Banish Misfortune), characteristically evocative on the slow airs, including Seán Ó Duibhír a Chleanna (unusual spelling there!).  Any Peoples album is always welcome and this is another glowing evocation of the man's sheer virtuosity.  It's economically priced too, at a mere IRŁ10, but the trappings provide slim fare.  What exactly the cover picture is supposed to signify in relation to this wonderful music is beyond credence and there is no photograph of Tommy himself.  There are no notes on the tunes and the actual notes on the fiddler himself consist of two brief paragraphs.  So, musically, while this will excite and inform, anyone wishing to know more about Tommy Peoples is best advised to seek out Between the Jigs and the Reels.