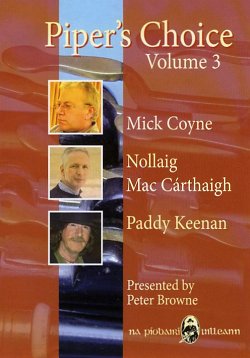 The uilleann pipes represent the most developed form of the humble bagpipe.  They are fiendishly difficult to play, as illustrated by the head-down-eyes-shut pose so typical of players of the Irish pipes.  In the hands of a master piper they can be by turns lyrical and expressive, fast and exciting, or even sinister, This DVD features three pipers at the top of their game, each representing a very different style of playing.  They are seen in the relaxed surroundings of the headquarters of Na Píobairí Uilleann in Dublin where they are in conversation with Peter Browne.  Each piper plays six or seven tunes/sets, and talks about their approach to each type of tune they play.  There are some discussions on technique, but these form only a small part of the conversations, which are mainly concerned with the players' approach to the tunes, as well as some more general comments.  A very wide range of tune types is covered; as well as the usual jigs and reels, there are slip- and hop-jigs, hornpipes, polkas, slow airs and even a song.

The first piper featured is Mick Coyne, playing a left handed concert pitch set.  His playing is fast and crisp in a rather staccato 'closed-fingering' style.  This is well illustrated in his first set of tunes, the well-known reels Rolling in the Ryegrass and The Flogging.  The Honeysuckle, a cracking hornpipe, is beautifully played and, although not slow, every note is clear, crisp and with space around it, features which characterise his playing throughout.  Mick's rendering of The Wounded Hussar is very spare by comparison, relying almost entirely on phrasing for effect, and not making any use of the regulators.  In fact, he does not use them in any of his tunes on this recording.  Mick finishes off by accompanying himself singing I am a Rambling Irishman where unfortunately, no attempt seems to have been made to balance the voice and pipes on the recording.  Mick Coyne is a very articulate piper, who is also a teacher, and he has clear though not restrictive views on how things should be done.

Nollaig Mac Cárthaigh is another teacher, heavily involved with the activities of NPU.  He plays a three-quarter flat-pitched set in a rather gentler, more legato style.  The 'flat' pipes lend an older, sweeter sound to his playing; this is how the uilleann pipes sounded before concert pitch pipes were brought in during the late nineteenth/early twentieth century, to provide the volume and compatibility for the concert stage.  He plays the widest range of tune types on thr DVD, including both hop-jigs and polkas.  My comments on his playing style do not imply any lack of speed where it is needed, as shown in the two polkas The Pigs Eating Nuts in the Woods and Tom Barretts, which are played with great fluency.  It is in his playing of the slow air Johnny Soioge that Nollaig's restrained use of the regulators is heard to best effect.  His comments on playing slow airs are interesting; most of those played by pipers are song tunes, and he believes in learning at least some of the words before beginning to work on the tune.  He himself is singing them in in head as he plays, and it shows.  Similar advice was given by Seamus Ennis many years ago.

The third piper, Paddy Keenen, is the most widely known of the three from his work with The Bothy Band in the 1970s and '80s.  He plays on two sets of pipes; a full set in concert-pitch and a flat-pitch set with a missing bass regulator.  To my ears, Paddy has the sweetest and most in-tune chanters on the DVD, which is no criticism of the others.  He is also by far the most adventurous of the pipers, using the full gamut of effects available on the uilleann pipes, switching the drones on and off at significant points such as a tune change, and making extensive use of the regulators.  Not only does he use these to vamp chords in the dance tunes, he also uses them to supply a harmony line when his right hand is free, as on the slow airs John Walsh's and Molly Bán.  He is also a wonderfully fluent player, clearly demonstrated in his playing of the jigs Coppers and Brass and The Rambling Pitchfork.  Paddy is perhaps the least articulate in response to Peter Browne's gentle questioning.  When asked about his approach to playing, he engagingly describes it as “free-fall”, from which it is clear that he is the most intuitive player of the three.  This does not imply a lack of thoughtfulness about what he is doing, but it happens in the course of constant playing and experiment rather than as an analytical process.

Indeed, it is apparent from the conversations that all three think deeply about what they are doing.  For example Mick Coyne, with the most 'notey' and decorated style, is adamant that the tune must still be clearly at the root of the performance.  All speak of the value of searching out the source of a tune before making it their own.  None of the performances are note-perfect, perhaps because of the informal setting, but this is a reflection of the spontaneity that is so much a part of their playing.  Above all, there is a very high level of musicality shown by all three.

Each volume in this series features three master pipers, and the fact that another couple of volumes could easily be filled with equally good players illustrates the impressively healthy state of traditional instrumental music in Ireland.  This DVD is a treat, even for a non-uilleann piper like me.  There is some great musicianship on display, and some thought-provoking opinions discussed.  I recommend this DVD to anybody with a serious interest in Irish instrumental music, or anybody who enjoys really good playing.