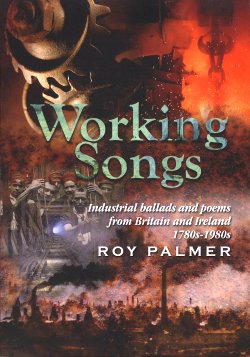 Roy Palmer uses his knowledge and love for traditional songs to write history in a straightforward, not overly-academic way.  His Boxing the Compass and A Ballad History of England have chronological accounts of British sea songs and ballads respectively, set in their social and political context.  He has an equal flair with subjects where he looks at different aspects, with each one dealt with separately but again chronologically.  The Rambling Soldier is an example, and this approach has been adopted in his most recent book Working Songs.  The subject has not been covered in any depth since Bert Lloyd and Ewan MacColl revealed to us the idea of 'industrial folk songs' in the 1960s, and it is pleasing to have it now covered by such an excellent writer and scholar as Roy Palmer.

The full title of the book is Working Songs: Industrial ballads and poems from Britain and Ireland, 1780s - 1980s, and this is important, because it does not by any means cover the gamut of human work.  In his introduction, the author is keen to make clear what the scope will be.  It would not include songs which have evolved to help with work, such as waulking songs, shanties, and even the wartime Music While You Work radio programme.  It would look at songs about work and workers since the industrial revolution, and since few such songs had survived in oral tradition, its source would be the printed word, and in particular the huge broadside output of the 19th century.  The introduction also presages the dominance of two industries in this, namely cotton and coal.

The huge number of folk songs collected in the first revival, 1890 to 1920 were mainly rural, and almost none were songs of protest or politically motivated ones.  This book tells a very different story about the songs working people were singing in the rapidly growing industrial cities of the midlands and the north of England.  For not only did the industrial revolution change the nature of work forever, it changed all aspects of everyday life, including culture.  The book is a history of how working people first had to adjust to the tyranny of work in the new industrial age starting in the late 18th century, and then struggle against both owners and the capitalist system itself for 200 years, in order to gain something of a decent standard of living.  The chapter titles show the relative importance of different aspects of this, the first four being: the tyranny of time-keeping brought about by factories; the abuse of young children and women that it brought about; the sheer meanness of the owners in paying the absolute least for the most exploitation at all times, and the dangers, particularly of pit work (lots of mining disasters); and hunger riots during bad times or when machines came into the works.  There are then three chapters on different aspects of strikes, about 40 per cent of the book, followed by one about 'pleading songs' in times of mass unemployment.  A lot of this does not make for a cheerful read, but that is what life has been like for these people for 200 years.  It may not be a cheerful read, but the author's skill makes it an easy and fascinating one, and the content most definitely makes it an illuminating one.  (It was somewhat of a relief, however, to have a final chapter about workers' leisure time!)

This history is illustrated thoroughly and skilfully by the use of songs and poems of the period.  There are 200 songs, nearly half with tunes.  About half would be recognisable to readers of this review, many well known, such as The Blantyre Explosion, Bye Bye Blackleg, The Colliers Rant, The Weaver and the Factory Maid, Fosters Mill, Droylsden Wakes, The Hard Times of Old England, Patience Kershaw, Poverty Knock, and Three nights and a Sunday, Double Time.  Each of these is positioned to illustrate the point being made in the text.  But what Palmer gives us better than anybody else could in this area is songs which we've not come across before.  Maybe they are not all very good songs, maybe not long lasting, but maybe written by a factory operative involved in a bitter longstanding dispute which reduced their families to starvation.  Written for the moment, and maybe helping to bring the situation to an end.  But for the reader, they tell us a great deal about what working people were engaged with in a way that perhaps conventional histories do not.  Let us look at a small selection of these songs:

• Three songs early on establish the new tyranny of the industrial age in the form of the factory bell (two with this title, and one with the magnificent, if long-winded title A Dialogue between Owd Carter Joan o' th' Mumps, an' Tum o' lung Harry's i'Owdham).  A photograph of the Stanley Mill near Perth actually has a bell tower which could have left the workers (sorry, 'operatives') in no doubt as to the importance of timekeeping.  Oh, and just over the page from this is a superb photograph of the knocker-up: 5 AM Come get up wi thi.

• Although the book covers the 1780s to the 1980s, Chapter 3 (The Bitter Cry of Labour) opens with a photograph of a manuscript of 1719, The Jolly Weaver, a quote from a 1630 ballad The Poor Man Payes For All, and a 1674 print The Clothiers Delight wherein a West Country gaffer rejoices in how much he can get out of the weavers for such little pay.  So, perhaps it was ever thus?

• I always learn a lot of history from Roy's books, and here are a couple of examples.  In The Four-loom Weaver, a song I have been singing for nearly 50 years, there is a reference to 'waterloo porridge', which I've often wondered about, but not investigated.  Clearly a derogatory term to imply rubbish.  But in Chapter 8 (Singing a Pleading Song), we get the answer.  Soldiers and sailors returning from the Napoleonic Wars were, as always, promised everything once victory was achieved: 'Then we shall have a loaf for sixpence once again.  And then the poor of England may cease for to complain; And every trading country will flourish here once more'.  Sound familiar, 20th century-wise?  'Waterloo' as an adjective was applied to many things in the most derogatory way in the period following the victory, when times were harder than ever.  At least two songs under the title The Tradesman's Complaint spell this out.

• Whilst most of this book and the songs it quotes stress the sheer hard grind, seemingly a '24/7' regime, there are surprises.  I did not know about 'Saint Monday' whereby it was normal not to work Mondays.  This topic is found in Chapter 9, Time to Spare.

• I should also mention that although tunes are usually not given for broadsides, this book makes great efforts to find appropriate ones.

As indicated earlier, songs of the industrial revolution have tended to mean 'mills and mining', or 'Lancashire with a bit of Yorkshire and Durham with a bit of Northumberland', but in Palmer's hands we go further.  He's a midlander, and has been doing this for such a long time that he can counterbalance this 'North is industry, South is farming' thing with copious examples from other industries and parts of the country.  Tear of Pity, for example, is written by a 'poor framework-knitter' from Nottingham in 1821; A Woosted Comber from Taunton features in the section on 'lads and lasses'; strikes feature in Mather's File Hewer's Lamentation; a sailor's strike in 1851; and 'The carters' and railway servants' strike' in the 1870s; a song from the potteries, The Truck Master is an ironical sideswipe at the tyranny of the tommy shop.  There are even songs from the post-war motor industry.

However, songs about pits and mills inevitably dominate, and even this author, with such a tremendous knowledge and experience of broadsides and folk songs, cannot find an industry that comes near to these two in terms of songs.  I wonder why this should be?  They were probably the industries that employed most people during this period (ironic, isn't it, that both have virtually disappeared?).  Other 19th century industries employing large numbers include engineering, iron and steel, the railways, the docks, and sailors of every kind.  Sailors are an interesting example.  Between the merchant and Royal navies the 19th century must have had very large numbers, and sailors have always been prominent in songs.  Many of the 'rural' folksongs collected in the first revival feature sailors, and in a collection of chapbooks in Newcastle University library with about 1700 songs, songs about sailors abound.  It's the romance of the sailor of course.  The vast majority are where the sailor is bidding a tearful farewell to his girl.  They do not appear in Working Songs because they are not about the sailor's work.  Even those many sea songs about work, the shanties, do not appear because they are outside the scope of the book.  So, where are we with the other industries?  For the steel and chemical industries I've heard it said that the workforce was a transient one, which might explain it, though I'm not convinced by the premise myself.  I am struggling for other explanations for other industries.

I'm left asking two questions, and with one quibble.  Almost all of these songs are political, either at a parochial or a national level, but how many broadsides were political?  Very few, I think, as with the rural folk songs.  The sixties revival came in on the back of the 'protest songs' evolving via CND and the like, but we found the traditional stuff to be ever so gentle in comparison, however attractive musically and linguistically.  So, the author has had to dig deep to get appropriate songs to Illustrate his story, and there is nobody who does it better.  We should also understand, I think, that most working people did not spend their lives singing about the misery, hard times, and injustices of their work, but instead looked for light relief on a Saturday night in the pub or in a family get-together, as is shown by the Elliott family's repertoire.  However, the songs in this excellent book performed a vital function for a large number of workers, often for a short period.  It is vital that history records this, and it has been done superbly in Working Songs.  The quibble is with the loose use of the terms ballad and song.  The title and the advance publicity uses the word 'ballad' emphatically but very few of the singable examples are ballads as most of us would understand them, and indeed the index of titles and first lines is called 'Index of the Songs'.

The production maintains the very high standard we have come to expect from Herron, with layout and cover by Bryan Ledgard, a wide range of quality illustrations, and with its increased size compared with its stablemates, it is a pleasure to read.  At the start of this review I used the term 'not overly academic' to describe Palmer's writing style, but the scholarship that underlies this is of the highest quality, with an average of 70 references per chapter, and an extensive bibliography and discography.  Buy it.