Paddy in the Smoke 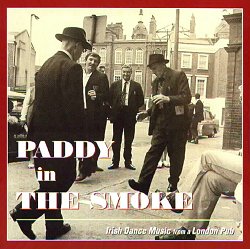 Ah the evocative picture on the front cover (by John Harrison)!  Even better in its larger original on the bashed-up copy of the LP I still treasure, it captures the scene of impromptu dancing outside The Favourite on Sunday lunchtime after last orders had been called and consumed (many of the best tracks are accompanied by the bell announcing 'Time!'), after we had stood respectfully for The Soldier's Song, after Jimmy Power had definitely stopped playing and told us, "Go home and have your dinner!"  Women are waiting with dinners overcooked and still the crack continues: Martin Gorman stepdances while piper Tommy Sheridan looks on, everyone stands around in the Sunday sunshine, loath to abandon the chance of prolonging the enjoyment.

For some ten years this session was a must for me: be there by 12.30 when the music started, no matter how hung over from the night before.  A pilgrimage over Highbury Fields or up Holloway Road from the various bedsits of those years: I had to be there, to be part of a compelling experience which was always the same and always different. 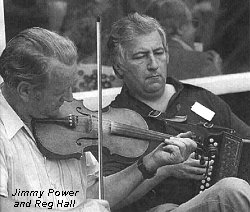 Always Jimmy Power on fiddle, Reg Hall resident at the piano, Gerry Wright doing a star turn on bodhran (battering the rim and chair-playing with the stick a speciality), Tony Ledwith or Paddy Malynn on melodeon.  Sometimes delightful Lucy Farr or stylish Bobby Casey or wild Danny Meehan on fiddles, perhaps Julia Clifford with her lovely individual Kerry polkas on phono-fiddle.  Often Tommy McCarthy on concertina and pipes plus his three musical daughters.  Always different as visiting Irish or American-Irish dropped in - you couldn't visit London without stopping by for a tune!

The great thing about this session, and that which set it apart from the many other great ones of the period (l970s by the time I got there), was that it wasn't all-join-in, but organised, stage-managed.  In between the ensemble numbers Jimmy Power would call up a musician, announce his/her name, give them a platform from which to be heard, not necessarily playing solo but making featured individual contributions which were expected to be listened to, despite the noise from the bar, the shouts for pints - all are here on the atmospheric recording!  The Favourite was one of the few sessions where singers were encouraged and given due respect: Oliver Mulligan.  Tony Husband, Sally Mulready, Bridie - even this reviewer- would be given the platform plus microphone - and if there wasn't proper attention Jimmy would "Ssh" down the other mic - most embarrassing!

So here we have the recordings: people enjoying making music together, discovering tunes in common, contributing more tunes from different regions in their own style (unlike today's often predictable shared repertoire and uniform session style); people enjoying being there to listen, meet, talk, shout encouragement.  It's all here on these 1967 recordings, thanks to Bill Leader's overhead mic which captured the atmosphere as well as the music, giving a warmth and sense of occasion which is quite different from any studio recording.

There are wonderful tunes here, a favourite is Farewell to Erin with its dramatic change from low start to high finish (sound clip).

There are the individual 'voices' of players solo or in duets.  Note how one fiddle takes over from the other in the lower octave on the second time through on Dennis Murphy's Hornpipe (sound clip).

There is fine steady playing from a lifetime's experience, uplifting and exciting playing, but little of the flash or virtuoso (though it's a pity Jimmy Power's brilliant party-piece The Bee's Wing wasn't included) for that isn't the point.  The point was not performance to an audience but the shared experience of being Irish, the exhilaration of playing tunes in common as a shared language - which we, the English observers, were privileged to witness.

Englishman Reg Hall, of course, was no observer but a vital part of Irish music in London.  Since the late '50s he had contributed his rhythmic piano accompaniment, understated but giving the music great lift and bounce: he also took on the role of scanning the crowd for any visiting musician Jimmy might not have spotted. 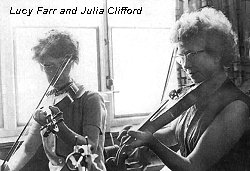 Later on, through the period of Jimmy's ill health and untimely death, Reg Hall kept the session going, on through the move to The Victoria, and always documenting the while.  (You can read Reg's wonderful Ph.D.  thesis on Irish Traditional Music in London in Cecil Sharp House and The British Library).

As well as being brilliant music this is an indispensable record of an era.  You could use it as a starting point to follow the development of Irish music in Britain over the next few decades.  A discography of the 17 musicians featured here would quickly run into pages! Not a job for me, I'm afraid, but I'd like to mention just one treasured recording, worth looking out for in piles of LPs in junk shops- or more likely on rare records wants lists: - Jimmy Power's classic Irish Dances on Bounty B7 6040, 1967.

Similarly to the recording of Kitty's Rambles/Dan the Cobbler here (sound clip), you get the rarely heard slow jigs, set dances and hornpipes played in strict time for dancing, with great restraint and nuances of style, just Jimmy (with Reg on piano of course), the perfect companion to the livelier, more sociable music on Paddy in the Smoke.

Note: the pubs in and around the Holloway Road, London N19, are still hosts to some excellent sessions.  Check them out and see if any can match up to the glorious past!