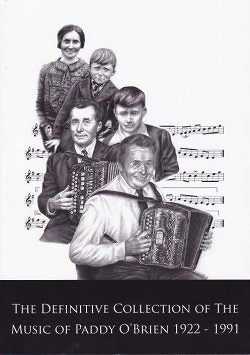 The name of accordion player Paddy O'Brien from Newtown near Nenagh, County Tipperary is probably as much talked about in Irish music circles today nearly 20 years after his death as it ever was.  First commercially recorded in 1949, he took a revolutionary path to playing the accordion which echoed through the 1960s and 70s in a host of box players and right through to players today.  An accomplished fiddle player he took the rhythm and ornamentation of the fiddle and adapted it to box playing.  The difference between his style and the older 78s by the Flanagan Brothers and others is dramatic.

Paddy O'Brien was not only a great box player, but he composed tunes that have been taken up by musicians around the world.  Because he wrote so many tunes for ceili band playing, and in particular the Ormond Ceili Band, the tunes fit very nicely on fiddle, flute and even uilleann pipes, which undoubtedly adds to their attraction and popularity.  Paddy also wrote what might be called exhibition tunes in odd keys like C, G min or B flat.  Like so many of the recent composers in the Irish tradition, such as Paddy Fahy or Ed Reavey, there's a characteristic twist in a Paddy O'Brien tune that can't be mistaken.

Paddy's daughter Eileen, who is well known as a great fiddle player with three CDs to her name, released a book of selections of her daddy's compositions shortly after his death in 1991.  Knowing that there were more tunes to be documented, Eileen used her time studying for a master's degree at Limerick University to extend that original book to include not only all 144 known compositions of her father, but also over 100 other selections prepared for ceili band sets, and settings of tunes provided for his dozens of students.

Besides the tunes there is a family history going back to Paddy's grandfather, charting musical and family connections with other great musical dynasties, Paddy's time in New York, his return to Dublin and eventual return to his home place.  The musical relationship with Seamus Connolly which was captured on the Comhaltas EP Banks of the Shannon is covered in some detail with input from Connolly.

There's an analysis of the impact Paddy's style of box playing had on the wider music community and comments, reminiscences and appreciation from friends, musical associates and admirers, some too young or distant to have known Paddy personally.  Paddy's compositional style is explored, revealing his use of themes or motifs along side standard musical tricks like flattened sevenths to give a modal or minor feel to a tune.  Above all, though, there's a deep understanding of what makes a true traditional tune, and nothing in the book sounds forced or artificial.

The arrangements of sets of other traditional tunes is a great source of old tunes and maybe less common settings of tunes.  They also show how Paddy was able to select old gems from O'Neill's collections and bring them into common currency.

Finally there are detailed transcriptions of some of Paddy O'Brien's early recordings, including Bonnie Kate and Peter Street from 1949 and his famous setting of The Lark on the Strand.

Paddy O'Brien was one of the great musicians and composers in the traditional style and this book stands as a great tribute and ensures his legacy will endure.  Highly recommended, it's available by mail order from Custy's in Ennis.