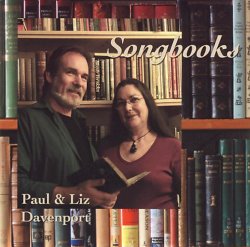 Paul Davenport stopped me at the Whitby Festival this year, and said that I had been pretty hard on the recent CD by his friend Jack Crawford in an MT review.  I had to admit that this was true - and wondered if I was in for a duffing-up.  Not at all; he then handed me this CD and said "I can get a dozen anodyne reviews of this any day - I could probably even buy one!  But I would be interested to see what you think of it."  A brave action - and one that I have to admire.  I hope I like the CD.

To start at the beginning, so to speak, the title of this CD is, possibly, revealing.  The booklet notes tell us that Paul & Liz Davenport, when they've decided to learn a new song, and have worked on the new material, put it in a book with which they practise - so these are just songs which happen to be in their songbooks.  Having a dark turn of mind, I read the notes and discover that all of these songs except one come from books - the only exception being Died for Love, for which they cite Mike Waterson as source.  So nothing here has been learned from a traditional singer.  Actually, this idea of mine doesn't fully reflect reality, since Paul has actually written three of the songs himself, and Mike Barber, Dave Dodd and Captain Darling have written three others - so that's six songs which couldn't have been learned from Traditional singers anyway.

Now to the singing.  I have the uneasy feeling that my own prejudices are ruling my perceptions here, but I think the first eight songs (of which only two are English traditional) all sound pretty much he same.  Paul & Liz's voices sound very similar, and they mostly sing in unison - but when there's a harmony note, it seems to add a modal - almost a minor - feel to the sound.  Add this to the fact that most of these first songs are pretty dark in character, and you may find an explanation for my feelings about them - or maybe not!

Then Track 9, Lucy Wan, starts - and everything seems different.  On the face of it, this is ridiculous, since the ballad is as dark as you could find, and comes with a highly modal tune.  Maybe it's the fact that Paul sings it solo, with a very effective and imaginative guitar backing, that makes it such a breath of fresh air.  Whatever, I think it's very well sung (and played), with lots of rhythmic variation, space, and dynamics - and I like it very much.  Next we have Stormy Winds, a Hampshire version of We Shepherds are the Best of Men - the one the Watersons sing - and this is done in much the same style.  A good Unquiet Grave follows, with some effective rhythmic changes and one lovely bit of melodic variation.

I have to sincerely thank the Davenports for introducing me to Captain Darling's Indian Mutiny song, The Next to Die - maybe the best bit of Victorian melodrama I've encountered ... certainly the most convincing and real.  This truly is a superb song - Kipling would have been proud to have composed it - and has a great tune as well.

So stand to your glasses, steady; 'tis all we have left to prize.
Quaff a cup to the dead already - and one to the next who dies.

Wonderful - they don't write 'em like that any more!

Four of the remaining five traditional songs sound pretty much as you will have heard them many times in the mouths of revivalists.  The exception is Died for Love, aka A Sailor's Life, from the repertoire of Joseph Taylor - or so we're told in the booklet.  Unless the Davenports know more about Mr Taylor's repertoire than Steve Roud does, this is incorrect information.  Joseph Taylor did sing Died for Love, and it appears on the Leader LP ... but it's not this song - and it's certainly not this tune!  What we have here is, I think, Paul's attempt to copy Mike Waterson's highly eccentric rendering of A Sailor's Life - an attempt as pointless as it's unsuccessful.

So - for me - a CD of two parts; tracks 9 to 18 being much better than the first 8.  Most of all, I'm surprised that - since Paul & Liz Davenport are obviously capable of creating their own versions of traditional songs (as evidenced by Lucy Wan and The Unquiet Grave) - they seem perfectly happy to merely sing the words and the tunes of songs they've found in books, with little or no attempt to come up with something uniquely their own.  Many Traditional singers have managed to do this ... far too many revivalists have failed - or seem not to have even tried.  Singing is about communication - or should be - and too many of the offerings here just don't.