Traditional Irish Recordings from the 1920s and 1930s 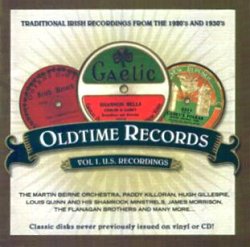 “Oh, no,” you’re probably thinking, “not another CD of remastered Irish-American 78s!”  Well, ‘owd yer ‘osses’, as my Grandfather used to say, for one moment.  Of course there have been many previous similar collections, several of which are reviewed on these pages.  However, this new compilation makes the startling claim that its contents consist of ‘Classic discs never previously issued on vinyl or CD!’

Now that is a bold assertion and will probably drive some enthusiasts to spend the next few hours busily checking their record and CD collections to verify the contention.  Indeed this reviewer did check various discs issued by Rounder, Topic, Proper, Folkways and the Coleman Heritage Centre and was unable to find any duplication elsewhere - to the best of his knowledge.  That last phrase is a caveat also utilized by this new release’s compilers (though obviously in the plural).

Said compilers are Gerry Clarke and Emmett Gill from Galway, from whose musical collections this selection of tracks has been drawn.  The former undertook all the work of transferring the music from 78s to CD, noting that many early acoustic recordings made via a horn coupled to a disc cutter have been ignored by previous compilers because of their poor quality in comparison to those made from 1925 onwards following the introduction of the Western-Electric microphone and the onset of the ‘electrical’ recording process.  Several such acoustic recordings appear on this CD, including a set of reels by the piper Tom Ennis (dating from 1920) and an early James Morrison track recorded for the Gennett label in 1923.  In remastering such tracks Gerry has admirably resisted any attempt to reduce the ‘vibrancy of the music’ while removing all the sonic clutter garnered by years of wear and tear.  This does mean, for example, that the Morrison cut suffers from background hiss and volume variation, but the record is so unconscionably rare that any quibbles should be firmly defenestrated.

For the most part, however, the recordings date from the late 1920s to 1939, the year when the Donegal fiddler Hugh Gillespie’s last New York session for the Decca label with his regular accompanist, guitarist Jack McKenna, included the version of Pigeon on the Gate featured here (and illustrates the world of difference between the music of the man from Ballybofey and his contemporary Néillidh Boyle, from Dungloe via Glasgow, whose far wilder, more typically Donegal rendition can be heard on Reg Hall’s Topic compilation Past Masters of Irish Fiddle Music).  But then Néillidh owed his allegiances more to Scott Skinner (encapsulated in the closing two-note flourish), whereas one of Hugh’s teachers was, of course, Michael Coleman.

Perusal of the track listing above reveals the absence of Coleman from this CD’s cast list, largely because the supply of his recordings has been exhausted by previous compilations, not least by Harry Bradshaw’s double-CD collection and the Coleman Heritage Centre’s The Enduring Magic album.  Nonetheless, there’s still a sizeable Sligo presence in the shape of Paddy Killoran playing a couple of reels with piano accompaniment and in duet with his erstwhile near neighbour Paddy Sweeney to the backing of the Pride of Erin Orchestra on Cherish the Ladies.  For those interested in musical arcana, the latter track, as the album’s compilers note, ‘appears to feature the C melody sax, an instrument unusual in Irish music’.  Also present elsewhere are two more Sligo fiddlers, Louis E Quinn and James ‘Lad’ O’Beirne while further representation from North Connacht appears in the shape of the flute player John McKenna from County Leitrim.

Another musician from that region, the Roscommon piper Martin Beirne, leads his orchestra through three frenetic reels (The Boy in the Gap was the third and not included in the track listing provided above which relies upon the original 78s’ labels).  Said tripling of tunes was unusual in the 78rpm era since the format’s maximum length was just over three minutes and customary practice was to include just a couple of reels or jigs, although the track by the Galway melodeonist P J Conlon is an equal oddity in involving improvisation around the melody of just one tune, the reel The Heath’ry Breeze.

There is one last Sligo factor to mention and that involves the mysterious K Scanlon who provides a medley of jigs recorded for the Columbia label in 1929 (Father O’Flynn, The Irish Washerwoman and Haste to the Wedding).  This is the other side of the 78 disc included in Reg Hall’s Irish Dance Music collection for Topic, a set of reels featuring Bonnie Kate, subsequently recorded by Michael Coleman in 1934.  In considering the identity of the fiddler involved, Reg hedged his bets, referring to the possible derivation of Coleman’s setting of said reel.  Clarke and Gill are far more forthright, affirming that ‘our collective opinion is that the fiddler on this record [Medley of Jigs] is actually James Morrison’ and they might well be correct.

An album of Irish music from this period usually reflects the breadth of the labels’ target audience and this is no exception.  There are plenty of examples from the music halls, not least in the shape of five tracks from one of the most popular acts of the time, the Flanagan Brothers (including a solo vocal appearance by brother Mike), and a ‘novelty’ performance by ‘Patrolman’ Frank Quinn, as well as closing the album via the cod romanticism of John Riley’s My Wild Irish Rose, backed by Joseph O’Leary’s Irish Minstrels.  Those not fond of such populism should press the fast-forward button, though they’d be missing some fine reels from the Flanagans.

All told, this is a thoroughly well-rounded presentation, enhanced by an attractively presented sixteen-page liner booklet providing information on the dates of the recordings, the original labels, the personnel involved and comments on the tune selection.

Gerry and Emmett intend to issue further CDs drawn from their collections and should be actively encouraged to do so by purchasing this first splendid sample.  Their website is www.oldtimerecords.com, though, if you’re interested in buying a copy, it’s probably best to contact Gerry at: shadylane@eircom.netor Emmett at: emmettgill@hotmail.com