Belief in the existence of a parallel world and in otherworldly phenomena has long been established in Irish tradition and facets of such belief continue to be found in contemporary Irish society.

This book, with two accompanying compact discs, examines aspects of the enduring belief and fascination which the Irish imagination has with supernatural beings, encounters and occurrences as represented in song and music.  The material contained in this publication which includes recorded sound, photographs and manuscript transcriptions is drawn from National Folklore Collection/Cnuasach Bhéaloideas Éireann in University College Dublin. 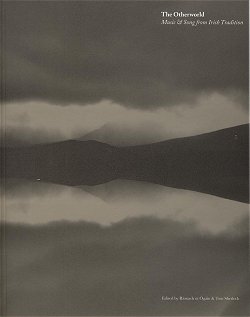 The above quote is from the Comhaķrle Bhéaloideas Éireann website, and pretty accurately describes this hugely interesting and absorbing publication.  Maybe the first thing to say about it is that it is an absolutely beautiful thing in almost every respect.  The book is crammed full of stunning photos, often full page, and the two CDs equally crammed with lovely music and song.

Given that, it seems a shame to make any negative comments - but there are a few which do need to be aired.  The first is a general one, and reminds me of a famous MT review of another 2-CD project, Frank Harte's My Name is Napoleon Bonaparte.  Our reviewer felt that, in order to fill two full-length CDs, a number of songs had been included which were not really 'Napoleon' songs.  Similarly with this publication, I feel that there are several songs and stories concerning murders where a female relative dreams of the death, and I suspect that these are so commonplace that to attribute them to 'Otherworld' intervention is to stretch the point a bit.

A good number of the songs and stories are in Irish, and all are given full translations in English.  However, in the book's text, words in Irish are not translated or explained - I happen to know that the Sķ are the Fairies, but maybe other non-Irish speakers would not.  Strangely, this practice doesn't persist throughout the book, and after about halfway through some translations and explanations are given.  This makes me wonder about the editorial process involved here - we have two editors, Rķonach uķ Ógįin and Tom Sherlock, but I wonder if there shouldn't have been a third ... to edit the work of the first two.  A particular example being the long and hugely detailed six and a half page Introduction; this describes the various sorts of 'Otherworld' interventions into the Mortal sphere - and a lot of it seems to duplicate things that have been said earlier in different forms.  Then, when we get to the text which goes with and supports the actual songs, tunes and stories from the CDs, we often get the same information again.  I feel that this latter situation is where the information is most valid, and that the Introduction could have been a great deal shorter.

I fully accept that to comment about omissions in a project of this size and scope is probably a bit pedantic, but I was surprised to find that no recording of The Fairy's (or Faries') Hornpipe or The King of the Fairies had been included, or that given that so many of the accounts of Fairy music described it being played by a piper, that there is only one track by a piper on the two CDs.

Nonetheless, there are some really lovely things to be heard amongst the 40 tracks on the two CDs.  I'd like to let you listen to The Fiddler and the Fairy, told by Mickey Doherty, but it really is a bit too long for a sound clip, and there's no point in half a story!  But his introduction to Jig Learned off the Fairies give an idea of his beautifully considered speech ... the fiddle playing is not bad either!

One of the advantages of being Irish is that the real traditional performers never quite died out as they did in England, and the sharp stylistic dividing line between young and old practitioners is far less evident there.  Quite a number of the singers on these CDs are under 50, I would guess, but few exhibit the 'revivalist' stylistic traits that their English counterparts would tend to display.  (Sadly, this can't be said of the singer of that most iconic of Otherworldly ballads, Tam Lin.)  But Ciarįn Ó Gealbhįin makes a very fine job of Pilib Séimh Ó Fathaigh, a very definitely 'Fairy' song, with roots dating back almost 700 years.  A traditional singer from the mid-20th century, Nora Dunlop, gives us a fine mermaid song, An Mhaighdean Mhara, with its final line to each verse "And here is Mary Heeney and she has crossed the River Erne" reminding me a little of The Bay of Biscay-O.

I can't leave you without a bit of the standout track, The Moving Clouds, played on the fiddle by Néillidh Boyle.  He claimed to have been at a Fairy wedding and learned "the enchanted music of Ireland that was long ago buried since the days of the bards".  He didn't name any of the tunes he'd learned that night, so the inclusion of his composition here may be stretching the parameters ... so what?  It's wonderful playing!