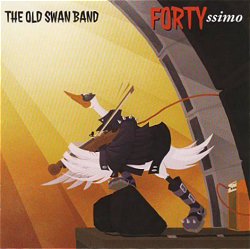 Well, who could imagine that it's been 40 years since a group of musicians from a regular session in Cheltenham's Old Swan pub set out to play some tunes and accompaniments to Ken Langsbury on one of his folk club gigs?  Ken called us the Cotswold Liberation Front in those days - but people didn't take to the name, and called us The Old Swan Band ... and when we started playing for dances, so did we.  Only Jo, Fi and Martin remain of the original members, and today's band sounds very different from the 1970s' band - as, indeed, it should.  So, what does it sound like on this brand new CD?

Absolutely fabulous - no question!  Here's a tune that jumped out at me on the first listen, The Green Ship from track 5 - lovely stuff!  In his review of OSB's last Swan-Upmanship CD back in 2005, Dan Quinn remarked: There is another statement being made here - that these are great tunes and, look, we are still playing them.  That remains true here, and we find Whistling Rufus / Woodland Revels sounding even better than ever, along with Bonny Breastknot / Getting Upstairs / Blue Eyed Stranger and Gypsy's Hornpipe / Astley's Hornnpipe / Coleford Jig brought in from the 1990s' English Country Dance Band repertoire, in which Paul, Flos and Martin played.  Not having kept up with the OSB repertoire over the years, I can't say which are the newest sets, but I guess that tracks 2, 5, 6 and 12 are probably amongst the more recent additions.

There's a nice variety of tune types here; mostly polkas, jigs, hornpipes, schottisches and marches of course, but we do get a set of that rare breed, the English slip-jig, Covent Garden Row / Hunting the Hare / Bishop of Chester's Jig, which some callers will insist on for strip-the-willow type dances.  And it's good to see that the old "No Reels" injunction still applies!

Enough!  This is a lovely record - great tunes, beautifully played.  As Dan Quinn wrote: In 1995, I concluded my sleeve notes to the Old Swan Band's compilation CD Still Swanning … by saying 'The Old Swan Band was the leader of the pack'.  Ten years later, with the issue of their new CD, I see no reason to change my opinion.  In the light of this 2014 recording I can only say that I share his opinion absolutely.