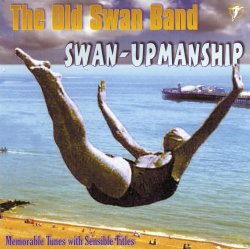 In 1995, I concluded my sleeve notes to the Old Swan Band's compilation CD Still Swanning … by saying 'The Old Swan Band was the leader of the pack'.  Ten years later, with the issue of their new CD, I see no reason to change my opinion.  To the CD's sub-title 'Memorable Tunes with Sensible Titles' should be added 'Played Properly', for this is an object lesson in how to play English dance music.  True, there are tunes here from Ireland, Australia, Sweden and America as well as from England, but, as you should well know, it's the way you play 'em.

The steady pace and emphasis on melody are as evident as ever and the fabulous back line (trombone, saxophones, keyboard) knows its place and does what it is supposed to do - provide an effective counterpoint to the melody line.  Just check out the fabulous Kitchen Girl (sound clip).

Included here is a set of tunes (Winster Gallop/ Four-Handed Reel/ Dark Girl Dressed in Blue - sound clip) from the band's first album back in 1977.  The sleeve notes say 'it's changed a bit since then and shows the way the band has developed'.  There is another statement being made here - that these are great tunes and, look, we are still playing them.  It seems to me that a lot of what I will call 'old tunes' are being forgotten in favour of newer discoveries and newly written ones.  I've nothing against them, but I wish they would not supersede the older ones.  The very fact that this band still plays these tunes - and there are many in evidence here - pleases me no end.

The overall effect of this immensely enjoyable album is of a working dance band with a well-played-in repertoire who enjoy what they are doing and do it well.  This is no CD that could be used in place of a band - hardly any of the tracks are dance length and often we only get twice through each tune.  It doesn't matter - this is a studio version of the Old Swan Band's current repertoire and a clear example of 'what you hear is what you get'.  This is a great dance band, all the tunes are memorable and they have all got sensible titles.  One final word of praise for the percussion work of Martin Brinsford - spot on every time, and each track different.  Wonderful!