"I thought I was the only one!" 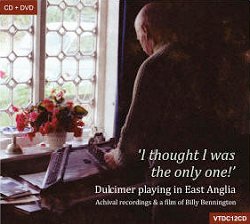 This latest CD reissue from Veteran is a long-awaited set of recordings of East Anglian dulcimer players, mainly a reissue of the cassettes of the same name released in 1998.  This CD takes the best of the East Anglian material from those tapes, and adds in further tracks, previously unavailable.  The set is completed with a DVD reissue of the EFDSS film of Billy Bennington, originally released in 1979.  The recording is in many ways a companion piece to the 2005 CD Billy Bennington: The Barford Angel, showcasing the music and anecdotes of this virtuoso player.  It also ties in with the recent launch of the website www.eastangliandulcimers.org.uk, a very comprehensive and on-going study of the players, makers and instruments of the area, drawing on John and Katie Howson's research, and that of others as well.

The dulcimer was once hugely popular in East Anglia, particularly between about 1850 and 1930.  These recordings were made between 1958 and 1998, long after this heyday, and perhaps therefore represent the last flowerings of this once vibrant tradition.  As the CD notes state, "we have nine players from Norfolk, Suffolk and Essex, each with their own style of playing and level of skill, but all of whom were part of this vibrant living tradition, although some thought that they were the only one still playing - hence the title of this album."

The CD starts off appropriately with six tracks from Billy Bennington of Barford in Norfolk, to whom a previous album has already been devoted, the title of that, The Barford Angel stemming from his nickname due to his appearance when carrying his dulcimer on his back whilst cycling.  A truly great player with a highly accomplished style, he certainly did not consider himself the only one, as he had a great deal of contact with other players and was in demand to repair and restring instruments too.  Most of the tracks given here have not been available before, and typically comprise a mixture of popular song tunes and hornpipes, such as the wonderful Dick Hewitt's Favourite Stepdance, a version of the ubiquitous Bristol Hornpipe.

The oldest recordings come from Walter Jeary, three hornpipes - all old favourites for step dancing: Sheringham Breakdown, Sailor's Hornpipe and Yarmouth Hornpipe - as well as the favourite country dance Heel and Toe Polka of which he comments at the end, "a very old polka, that is."  Walter Jeary was a very regular player in pubs in various parts of Norfolk and these tunes reflect that; he also used to sing popular songs whilst accompanying himself on the dulcimer.  Jimmy Rodger was a Scotsman settled in Norfolk and his three tracks - two song tunes and a hornpipe - do demonstrate a very different, rolling style.  Mollie Whittaker of Wells-next-the-Sea was not a very regular public performer; she learned to play from her father Jack Rutland.  Her Waltz, although in a slightly hesitant performance, is a wonderful tune which is now regularly played by many musicians in the area.  As well as Swanee River she also plays a hornpipe: Stepdance, another version of the Bristol Hornpipe and almost identical to the version played by Hingham's Billy Cooper.  As the latter spent much time in Wells, there was undoubtedly much sharing of tunes going on.

Billy Cooper himself is represented by eight tracks, sublime performances of song tunes and country dances, recorded at various times in the early 1960s.  Billy learned to play from his father Frederick, who also taught Billy Bennington to play, evidence of the usual way in which such music was transmitted within this vibrant tradition.  A particular favourite of mine is the waltz Dulcie Bell(e), composed by Frederick Cooper.

From Suffolk, Tommy Sparkes of Rattlesden has two tracks from 1963, rather idiosyncratic versions of Soldier's Joy and Jenny Lind, the latter seeming to have a faint strain of Buffalo Girls in it and Charlie Philpot of Yoxford gives us a waltz and a hornpipe, simply Breakdown, from 1962.  New recordings which haven't been available before are by Essex player Oswald Stammers of Saffron Walden, a rather dramatic Unidentified Tune and the ubiquitous Sailor's Hornpipe.

The most recent recordings are those of Reg Reader of Knodishall in Suffolk, made by John Howson in 1998.  The eight tracks here, the usual mixture of song tunes and dances, amply demonstrate his wonderful, bright playing, and bring back memories of a great many afternoons and nights of music in which Reg played a prominent part.  He learned to play from his grandfather Charlie Philpot and, in traditional fashion, has in turn taught his grandson Tom Knight to play.  It is interesting here to compare Reg's playing of his grandfather's waltz (the end track of a medley: The Palm Trees of Kerry/Two Lovely Black Eyes/Charlie Philpot's Waltz) with that of Charlie Philpot himself.

The DVD part of the package is a cleaned-up version of the film of Billy Bennington from 1979.  Across many tracks he demonstrates just what a fine performer he was.  This film has long been unavailable as a VHS video and so its digital re-release is very welcome indeed.

In all, this album showcases just how important the dulcimer was in social music making in the decades before the Second World War.  The repertoires of the performers reflect this, with their preponderance of popular song tunes, waltzes and particularly hornpipes for stepdancing.  The musicians featured here may well have had their varying levels of skill, but they do collectively give a glimpse of what a vibrant living tradition dulcimer playing in East Anglia had once been.

This CD/DVD set is a welcome addition to the material available concerning East Anglian traditional music and song.  It comes in a handsomely packaged cardboard case with a great photograph of Tommy Sparkes and his dulcimer on the front.  The website is a wonderful resource too, containing full biographical details of the performers.  The album is available from Veteran Mail Order: www.veteran.co.uk