This is an album of traditional Irish music played by three talented musicians on fiddle, banjo and harp, with accompaniment on some tracks variously by guitar, piano, and bodhrán.

The three musicians have all held one or more All-Ireland Champion titles in their respective instruments and the sleeve notes indicate excellent musical CVs for them - which is borne out by the musicianship on this recording.

The sleeve notes are fairly comprehensive, following the brief biographies of each musician with a brief discourse on each set of tunes. 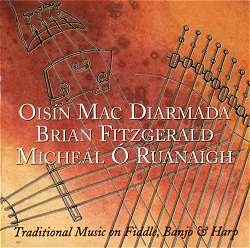 The biographies and the tune titles are given in both Gaelic and English, although the tune descriptions are just in English.  There are also English and Gaelic overall introductions, but here they are not translations, the Gaelic one being written by Matt Cranitch, the English one by John Carty - which leaves me wondering what the Gaelic one had to say!

The tune descriptions are useful and interesting, giving sources both printed and recorded, and often including interesting background snippets for composed tunes, such as how Paddy Fahy's tune 'The Funny Reel' came by it's name (when Paddy Fahy played it for Joe Burke for whom he'd composed it, he did so with the words 'It's a funny kind of an ole thing and you might make something out of it").

And I have to say I've found this a funny old album to review, with each listen leaving me with a slightly different view and feeling towards it.

The first thing to say is that the tunes are generally played slow.  I had been forewarned of this when given the CD to review, but even so it was a surprise how slow some of the settings were, especially some of the jigs, such as the second track Bímis ag Ól/The Lark on the Strand and track 11, Spórt.  I must say this tendency to slowness was not a totally unpleasant surprise, although at times I think it has been allowed to lead to a certain loss of interest creeping in after a while.

As for the tunes, the three of them have found some lovely tunes to play, the first track - a pair of reels, Reavy's/The Milliner's being a case in point, and is one of the sets played at a faster pace, although still stopping short of the speed Irish reels are often played to-day.  A lovely pair of reels (with the second in particular appealing to me), tastefully accompanied on guitar by John Blake.

A few of the tunes have familiar names but are certainly not all familiar versions, to my ears at any rate - and of course none the worse for that.

The third track, a hornpipe and two reels, The Pleasures of Hope/The Letterkenny Blacksmith/The Carraroe Reel, is another example of one of their slower settings, the hornpipe benefiting by becoming a very lyrical piece with just fiddle and harp.  The pace picks up for the reels of course but again is controlled and retains the clarity and expressiveness.

Track 4 features the solo harp on an air composed by Micheál Ó Ruanaigh for his Millennium Suite as part of the Comhaltas Ceoltóirí Éireann millennium celebration - and a pleasant enough air it is too, and demonstrates the musicianship of the player/composer.

Track 6 features two hornpipes on banjo with harp accompaniment, Munster Grass (Ed Reavy)/Peacock's Feather, which I'm afraid for me didn't really rise out of the 'pleasant enough, I suppose' category.  To me there seemed to be a bit of lift missing from the music, both in the melody and the accompaniment.

Track 7, Humours of Kilclogher/Tell Her I Am is another example of a very slow setting of a jig for the first - almost to a waltz level, and very pleasant too, with the second jig picking up to a lovely tempo to dance to, with the lift missed in the previous track returning here.

The start of Track 8 (The Blue Ribbon/Church Street Polka) came as a real surprise after what had gone before.  It's the only polka set on the recording, with a fine polka piano accompaniment by Séamus Quinn, and the first few bars really did make me sit up and take notice.  Ultimately though I'm afraid the set disappointed me, becoming overall a bit flat - perhaps polkas aren't their 'thing' and that's why there is only the one set.  Potentially good tunes though, especially the first.

Track 10, a pair of reels, The Pride of the Bronx/The Humours of Scariff pick up the pace a bit, although there is a bit of an unusual sound in the mix achieved with the accompanying bodhrán, played by Junior Davey - a bit of a thuddy deep sound and quite back in the mix.

Track 13 is a couple of jigs, Tommy Peoples'/Michael Dwyer's, which are played at a faster pace than some of the other jigs, although again at a steadier pace than the recent trend.  Here they also have a good lift and feel to them, with some interesting ideas in the guitar accompaniment by John Blake.  Again the bodhrán is well down in the mix, very much playing a supportive role.  An interesting arrangement overall.

Track 14 is a solo fiddle set of reels, Mason's Apron/Fred Finn's - but don't expect the Mason's Apron you'd hear at the average session, at least over here in England.  Apart from differences in the melody both reels are played at a much slower pace, more at the speed hornpipes have previously been heard on this recording.  It certainly gives them a different feel.

The final track, track 17, another pair of reels, Caher Rua/Miss Lyon's Fancy, seemed to me to come to life more than some of the other tracks and made me more aware of the traditional background and style behind these players - the fiddler Oisín Mac Dimarda has a particular interest in the Sligo/Leitrim style of fiddle playing, for example.

Overall, I found this a pleasant album to listen to, and probably one I will return to at times, particularly for those moments when I just want something relaxing and undemanding, but it isn't a recording that will set the world on fire.  After repeated listens the final impression is one of a laid-back recording, with a good selection of tunes, expertly played with precision, clarity and thoughtfulness.  I think it could have had a bit more lift overall, and I might also have preferred more edge, to help maintain an interest which I did occasionally find waning, although there were one or two surprises along the way.