This is Adnams' music - inimitable and good for the soul. (sound clip - Happy Hours)  This CD is a reissue of a cassette tape published in 1986, 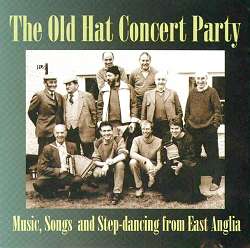 which marked the time when the Concert Party had coalesced into a recognisable entity and was travelling widely, bringing the flavour of old-time East Anglian rural social music to wider audiences.

For new listeners, a bit of background: John and Katie Howson moved to Suffolk from Liverpool some time in the mid-seventies, and started a painstaking trawl round mid-Suffolk villages (East Suffolk had been explored somewhat earlier by others) to contact surviving traditional musicians still having connections to the way music was played in earlier decades.  The book Many a Good Horseman is a record of the first stages of that research; and from that research and subsequent contacts, a core of still-active musicians was formed, who played regularly together with younger musicians such as John and Katie themselves, Jeannie Harris and Adrian Turner.  Reg Reader, from Knodishall, near Leiston, who had his great-grandfather's hammer dulcimer in his attic, was inspired to dust it down and develop his playing, and before long there was a wide network of musicians and step-dancers spreading their congenial brand of music, singing and backchat round the pubs of central Suffolk.  Though no longer under the name of the Concert Party, it continues to this day - the Old Hat Music Nights meet monthly in such places as the Ship in Snape, the Butt and Oyster in Pinmill and the Railway Tavern at Haughley.  Many of the best-loved source musicians of the East Anglian country music revival played with the Concert Party - Oscar Woods, Billy Bennington, Font Watling, Ted Chaplin, Dick Hewitt and many more.

The line-up for this recording is Katie Howson (melodeon), Reg Reader (dulcimer), Adrian Turner (fiddle and piano), Font Whatling (Melodeon and step-dance), Cyril Barber (melodeon and step-dance), Ted Chaplin (singer), Tony Harvey (singer), Des Miller (mouthorgan), David Webb (melodeon), John Howson (banjo) and Ted Stevens (percussion).  There are 17 tracks (one more than on the original cassette - Cyril Barber step-dancing to Katie playing Scotland the Brave), covering rousing ensemble numbers, music-hall and early popular songs, stories, step-dances and the odd folksong, like Tony Harvey's singing of Marrowbones.  The whole thing is extremely jolly listening from end to end, and gives a good taster of the Concert Party experience.  Nothing, of course, can capture the sheer bonhomie and general buzz of a good night, and, wisely, the record doesn't try to fake this.  Although the recording were made live, at the Cat and Fiddle at Wetheringsett and the Waveney Folk Club in Oulton, the recordings are clean, with no audience reaction.  Probably best, though it does leave the little stories and spoken intros rather high and dry: though audiences know the stories as well as the teller, the mere re-telling of the stories would always have been greeted with guffaws and hilarity.

The tracks are ordered in a fashion not dissimilar to a typical Concert Party performance, with seven ensemble instrumental pieces - with varying combinations of participants- framing a selection of songs, stories and step-dances to solo instrumentals.  The opening set, Oscar Woods Polka / Old Joe the Boat is Going Over / Redwing is a collection of well-loved tunes popular in Suffolk that frequently featured towards the start of the evening; and the tunes on the final track, Waiting for the Wagon / Dennington Bell, learned from one of the favourite source musicians, Dolly Curtis, were for a long time the all-in thrash that signalled that the evening was drawing to its close.

In between, we meet Ted Chaplin, who sings comic and music hall songs such as Is Issy Azzy Woz, and The Wooden-Leg Family (sound clip), in a style that suggests he had been singing the songs for most of his life.  Font Whatling plays the Silberman and Grock music-hall song Abey My Boy as an instrumental, and step-dances to Katie playing Albert Hewitt's Hornpipe.  Albert Hewitt, incidentally, was the father of well-known Norfolk step-dancer Dick Hewitt,

and was recorded in the early fifties for the BBC's 'As I Roved Out' series; and Abey clearly shows some of the stylistic elements that Katie Howson, Jeannie Harris and others assimilated in developing their current (and influential) melodeon styles. (sound clip)  Reg Reader, accompanied by Adrian Turner on the piano,

plays a selection of early 20th Century popular waltzes; his dulcimer possesses the mellow ringing tone that makes such a characteristic contribution to much East Anglian ensemble playing. (sound clip)  Tony Harvey's repertoire seems to look to wider sources; and the inclusion of Rattling Old Grey Mare is a reminder of the singer often bowling up to sessions in a smart pony and trap.  Cyril Barber contributes a short reflection on playing for dancing, and steps nimbly to a couple of tunes, as well as joining in several of the ensemble pieces on his one-row melodeon.

What is noticeable about the repertoire is that it is overwhelmingly Twentieth Century.  Although the social position of the music probably reflects a continuity going back to the nineteenth century and perhaps further, virtually everything heard here has been brought into the circulation by people responding to music in the current or near-current popular repertoire.  A few of the dance tunes are probably older - Rig-a-Jig and Starry Night for a Ramble for example,- but most are music-hall / early-century popular song absorbed by the grandparents and parents of these source musicians.  Even tunes like Cecil Pearl's Hornpipe No 1, which is in fact Petronella and therefore older, may well have come into circulation via radio and recordings in the 1950, during the popularity of Jimmy Shand and Scottish music.  So, this is music that has been used to entertain people, locally: letting people drinking in the pubs across East Anglia hear the music they currently enjoy, played by their friends.

Well, the context has changed, and in a sense, what the Old Hat Concert Party did was present a distillation of a hundred years of music; but present it in a way that was very much alive, and enormously enjoyable even in a contemporary context.  The Old Hat label, together with Veteran, Vintage and other associated labels have of course gone on to develop a formidable catalogue of traditional and revival titles, and to a certain extent this CD may seem a relatively minor contribution.  Where I think it is important, however, is as a showpiece for a truly remarkable and enduring piece of participant research, carried out with total respect and support for the musicians of the area, and which, among other things, brought a great deal of happiness to a considerable number of people later in their lives.

Many of the old musicians associated with the Concert Party are no longer with us - Billy Bennington, Font Whatling, Ted Chaplin, Dick Hewitt, Oscar Woods and many more have gone.  But by this remarkable overlap and sharing, the music lives on, and is still moving forward.

When I get to heaven, you'll find me over in those settles in the corner, with the old bwoys ......


(All unattributed tracks are by various combinations of the ensemble)
Site designed and maintained by   Updated: 21.11.02