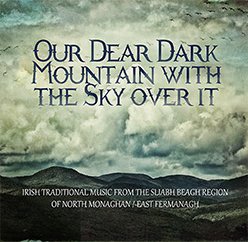 Our Dear Dark Mountain With the Sky Over It is the musical outcome of what must have been some fascinating research for Séan McElwain into a corner of his native Monaghan, the bare but evocatively-named uplands of Sliabh Beagh which straddle the border between Fermanagh and Monaghan - and thus between the North and the Republic.  Both counties are securely within the province of Ulster, however, and similar research has always added to the notion - first intimated by the music of Donegal - that its traditional music is somehow different from traditional music further south, and different in a similar sort of way wherever in the north you are.

That research was part of a PhD he carried out at Dundalk College of Technology under the title Opening up the canon of Irish traditional music, and there is the prospect that we shall one day see the fruits of his research in print.  It revealed that one of the most influential figures in the area was fiddler Owen Connolly (1880 -1950) - the accompanying booklet includes a marvellous picture of him in old age, cap firmly on head and fiddle firmly under chin, (he was described by Northern Standard columnist Eamonn Murray as possessing "a skill amounting almost to wizardry") - whose repertoire survived among his pupils, notably Francie McKenna who was recorded by Breandán Breathnach in 1968.  Those recordings reveal a fiddler firmly in the Northern tradition, whose playing can be both exciting like that of Johnny Doherty and sweet like that of James Byrne in different parts of his repertoire.

It is the playing of older musicians like Francie McKenna and the largely forgotten manuscript collections of the policeman Bernard Bogue (1860 - 1930) and schoolteacher James Whiteside (dating from 1870 - 1886 and recording the repertoires of musicians from the generation preceding Connolly) which are celebrated by the musicians involved in Our Dear Dark Mountain.

The selection here is based on those recordings and manuscripts, but there is nothing academic or precious about it.  Our Dear Dark Mountain is not a re-enactment of dear dead days in Sliabh Breagh but rather a modern celebration of its music and musicians.  To that end Séan McElwain has gathered together a group of outstanding musicians from Fermanagh and Monaghan (it would be invidious to single any out) who perform that music with verve and confidence for its own sake rather than for the sole sake of the tunes' origins.  There is also some fine (unaccompanied) singing from Monica Beagon and Catríona Sherlock (separately) on the two vocal tracks.

Including Séan McElwain the notes credit seven musicians (those of you who recognise the names in the track-listing above will know what to expect, those who don't are obviously in for a treat), but none of the tracks is a thrash involving all of them.  Rather do they feature one or two instruments carrying the melody (there are some nice duets), with or without discreet accompaniment by various of the array of instruments which are now customary in that role.  Although this is very much a joint effort, Séan himself thanks Dónal McCague in particular for his contribution to the project.  When I first heard the younger McCague's CD Bits and pieces a few years back my initial reaction was that he had been listening to the right people.  Well, here he is now playing McKenna's Reel (a version of the Swallow's Tail), somehow fusing the helter-skelter excitement of Johnnie Doherty with the precision of his brother Mickey (who played a similar setting).  This is followed by a spirited fiddle duet with Laura Beagon (accompanied by Séan McElwain) of the once ubiquitous Jack's Alive (elsewhere found also as a jig and a hornpipe) played locally as a reel.

Séan McElwain's accompaniments on bouzouki and guitar are delightfully delicate and discreet.  He also plays the banjo, an instrument which few would describe as delightful, delicate or discreet, but he (here taking the lead) and Brian McGrath contrive to be variously all three on the last track: Truagh Clog Dance / John Joe McElroy's.  The latter tune seems to be a version of the Winter('s) Night Schottische, which was also once popular among older fiddlers in England, and the first sounds as though it may be related to the simplified version of the Wonder Hornpipe recorded by Scan Tester and Dolly Curtis.  If I'm right on either count it's interesting (and possibly inevitable) that the undercurrent of once-popular tunes (and tune-types) outside the modern codified repertoire which could once be found all around these islands should also have surfaced in Séan McElwain's researches in and around Sliabh Breagh.

The whole thing is attractively packaged with informative notes and some good archival photographs.  Although some of the latter fade spectrally behind the text the originals may be seen in their full glory - along with a more complete picture of the project - on the website devoted to it at: www.ourdeardarkmountain.com