As I awaited the arrival of this CD it occurred to me that this would be the first time that I had reviewed a recording by someone of whom I know nothing, first or second hand.  Nevertheless, I admit a certain apprehension when approaching young Irish musicians because of an increasing tendency, in my view, for players to prioritise technique above all else.  Of course technique is important; it is the dominant feature of how well a musician can control and command the instrument.  Even an eccentric technique can be developed to a high level.  My concern is that too often the display of technique for its own sake takes over the music.  I recall somewhile ago being sat down to hear a recording of an Irish anglo player, whom I will not name, but who was being presented to me as the current bees knees. 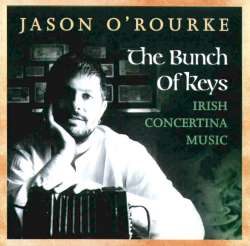 He was a very skillful player - as he displayed by interspersing bars of Scott Joplin syncopation into reels and flattening thirds and sevenths to sound 'bluesy'.  Brilliant technique indeed, but the result was crass and embarassing.

I find I return over and over as I think about traditional music to the excellent statement ars est celare artem - 'the skill is to hide the skill' or, more verbosely, 'It is the perfection of art when no trace of the artist appears'.  This seems to me to sum up all the appeal and quality of so much that is traditional from music and song to dance and traditional craft.  There is nothing flashy, nothing consciously clever, regardless of how superbly accomplished the creator may be.  Technique is the servant of the performance, not its reason.

I must say straightaway that Jason O'Rourke passes this test.  He is a very capable player indeed, and the music comes first with sources respectfully acknowledged.  Here he plays a good mix of reels, jigs, and hornpipes together with a slow air, a set of polkas and a set of Breton tunes.  He is joined by various combinations of guitar, bodhrain, fiddle and cello.

I have written recently, on this site, of my views on the guitar as an accompanying instrument in Irish music and there is nothing here which changes my mind.  I do not think the cello works either.  I am happy with the percussive style of playing which is sometimes heard in English country music, but this more legato style - while 'interesting' behind the slow air - is out of place on a set of reels.

The whole area of accompaniments is a problem throughout.  O'Rourke uses more left hand than is customary in Irish anglo players, producing quite full chords which give the tunes lift and swell and add a lot of texture and quality (cf. Up and About in the Morning).  For whatever reason, (perhaps it is unpredictable,) these emphases are not reflected in the accompaniments and the result can be a muddle, as in the opening reels.  Consequently the more successful performances are those where the accompaniments are sparse, or where the concertina is high in the mix (e.g. The High Part of the Road - an excellent set!).  A similar lack of thought seems evident in the fiddle which takes equal prominence with the concertina when it plays, but is not always close enough to be playing with, nor different enough to be complementing, the main instrument, yet The Holly Bush shows that the two can play well together.

There are some basic flaws too in production.  A tune which speeds up or has a confused ending can be sorted out in the 21st century or simply redone.  Even the fastest reeds and action can snatch a note when the pace is lightning fast.  If this happens, go back and redo it.  Printing where it is difficult to read on the inside back cover is maddening, (though I endorse the praise for Steve Dickinson and for concertina.net).

None of this has destroyed my first acquaintance with Jason O'Rourke.  This is a good selection by a very good player.  Perhaps what it really shows is that there is a need for a lot of thought before what makes a great session also makes a great CD.