I have given a fair amount of thought to the idea of playing Irish music as a group activity.  It seems to me that this is one of the most important ways in which Irish music could develop.  Let us postulate, therefore, an ideal type of CťilŪ Band or orchestra.  The first thing it must have is variety - which, expressed through variation, is a keystone of traditional music.  It must not, therefore, flog away all the time, with all the instruments going at once, like present-day CťilŪ Bands.  Ideally, it would begin by stating the basic skeleton of the tune to be played; this would then be ornamented and varied by solo instruments, or by small groups of solo instruments.  The more variation the better, so long as it has its roots in the tradition, and serves to extend the tradition rather than destroy it by running counter to it.

Without this album there would have been no Planxty.

The prestigious Irish label Gael Linn is celebrating its fiftieth anniversary and ” Riada sa Gaiety is one of several albums being reissued as part of this celebration, except perhaps the word should be 're-launched' as the recording has been available in CD format for some years. 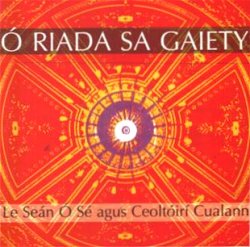 Originally issued in 1970, the year preceding SeŠn ” Riada's untimely death, the album consists of recordings made at a concert held at Dublin's Gaiety Theatre in March 1969 to celebrate the bicentenary of the demise of the poet Peadar ” DoirnŪn and features the County Cork-born singer SeŠn ” Sť alongside the nine-strong CeoltůirŪ Cualann, an ensemble directed by and including ” Riada.

3 and remains the most widely known, partly because none of the previous four has ever been reissued as a CD, but also because in many ways it encapsulated the principles stated in the quotation at the head of this review (though the music exhibited here bears about as much resemblance to a cťilŪ band as a wallaby does to a dishwasher).  Although public performances by ” Riada and CeoltůirŪ Cualann were a relative rarity, Irish ears had already become well accustomed to the ensemble's sound thanks not only to those aforementioned earlier releases, but to its radio broadcasts and, of course, the first and second albums released by The Chieftains.

4  That band, of course, had emerged from CeoltůirŪ Cualann, although its leader, Paddy Moloney, had long been interested in experimentation.  As he told this reviewer in an interview in 2002, Paddy's own experience of playing in cťilŪ bands had led him to become 'more interested in the combination of instruments.  [He] could hear harmonies and would play counter-melodies which was a little bit off the beaten track for the purists.'

At the time of the recording of ” Riada sa Gaiety The Chieftains were still semi-professional musicians.  All six members feature on the album (Paddy on uilleann pipes, fiddlers Martin Fay and SeŠn Keane, whistler SeŠn Potts, Michael Tubridy on flute and Peadar Mercier on bodhrŠn), the additional two musicians being the fiddler John Kelly and accordionist Eamon de Buitlťir.

Right from the outset, SeŠn ” Riada's emphasis on 'stating the basic skeleton of the tune to be played' is emphatically apparent.  Marcshlua UŪ Neill begins with Michael Tubridy's flute describing the melody to the accompaniment of the bodhrŠn, before being joined by SeŠn Potts's whistle.  Then the trio of fiddlers take over the melody before they, in turn, are subsumed by Moloney's uilleann pipes.  The whistle returns for another run through of the tune and all then participate in what can only be described as a closing riff.  It remains absolutely riveting, but one wonders just how much of the tune's arrangement came from Moloney and The Chieftains and how much derived from ” Riada.

Whatever the case, the effect is immediately dissipated by a performance of ” Riada's most famous composition, MnŠ na h…ireann.  The words were written by Peadar ” DoirnŪn, but the air is distinctively SeŠn's.  The song or the air alone have subsequently been recorded many times, by musicians as various as Kate Bush and the jazz-funk keyboard player Bob James, but one suspects that the version here on ” Riada sa Gaiety is the one which ” Riada would regard as definitive.  In this case, his harpsichord (an instrument employed because he believed it was closest in sound to the old bardic brass-strung harp) provides the opening, before the classically trained tenor SeŠn ” Sť enters the arena.  Frankly, whilst this performance might have been viewed as groundbreaking at the time, it now seems staid and akin to a Victorian country house after-dinner drawing room rendition.  ” Riada is rightly regarded as having kick-started a new version of ensemble playing of Irish traditional music, but nobody could possibly argue that his arrangements of songs or SeŠn ” Sť's delivery inspired a host of imitators.  Carrickfergus is still often sung, but rarely with the histrionic styling employed by ” Sť in a macaronic rendition (track seven) entitled Do BhŪ Bean Uasal, although Josef Locke would certainly have enjoyed it.  However, ” Sť's rendition of InŪon an PhailtŪnigh (The Palatine's Daughter - track eleven) does bear a very close resemblance to the kind of crowd-stirring performance that Kevin Conneff would later employ as a member of The Chieftains.

The second quotation at the head of this review referred to the origins of the band Planxty, but one wonders just how far Christy Moore's tongue was sticking into his cheek when he spoke those words.  Planxty Johnson (track four), the only form of the tune type to appear on ” Riada sa Gaiety, is far-removed from the Planxty sound as evinced by the band's eponymous and subsequent albums.  However, it is very adjacent to the performances of The Chieftains whose approach to ensemble playing is also strongly evident in the versions of the two slips jigs comprising The Whinny Hills of Leitrim (track five).  However, the intention of exploring melodic counterpoint (a very untraditional thing to do) becomes something of a cacophonic farrago when de Buitlťir's accordion enters the arena, largely because his instrument is clearly out of tune with the other musicians.  An extremely plodding version of the air An Ghaoth Aneas follows.

Track nine is a Paddy Moloney showcase and consists of the March of the King of Laois (MŠirseŠil RŪ Laoise), but, bluntly, it is an uninspiring tune verging on the insipid.  Then follows ” Riada's solo harpsichord rendition of two airs (An Chťad MhŠirt den Fhůmhar and Na Gamhna Geala) which simply reminds one of Samuel Johnson's remark about the value of the cucumber - it "should be well sliced, and dressed with pepper and vinegar, and then thrown out, as good for nothing".  ” Riada slices and dresses, but to nugatory effect.  The closing and twelfth track, RŪl Mhůr Bhaile an Chalaidh, repeats the formula exhibited by its opening predecessor.

So where does this leave us?  Firstly, there is no doubt that the ” Riada's and/or Paddy Moloney's arrangements of Irish traditional melodies and songs had a contemporary impact, but it was one which largely affected middle- and upper-class sensibilities and allowed an appreciation of the music's rural origins without tainting any of the listeners with the farmyard mire.

6  Secondly, while there is no questioning of the quality of the musicianship exhibited on ” Riada sa Gaiety, those arrangements had little impact on the ways traditional musicians in the rural West and Northwest continued to play (or, for that matter, London, Luton or Birmingham).  Neither the planxty nor the march ever became a significant part of most musicians' repertoires.  Arguably, in fact, it was the introduction of the pub session to Ireland that has had a more lasting impact on traditional musicianship and the ways in which the music continues to be played, involving an emphasis on unison playing rather than exploration of a tune's potential variations.

It might seem heretical to suggest so, but one wonders whether hindsight has provided a 20x20 vision of ” Riada's influence.  In a very important sense ” Riada did 'extend the tradition', but, in retrospect, it does seem that this was more to do with raising awareness about its essential value than in regard to any lasting musical effect.

On a closing note, it is somewhat sad that this Gael Linn reissue (or re-launch) of ” Riada sa Gaiety merely re-presents a previously available album.  No additional written material is included in the very brief liner, nor are its readers given pointers to where other live recordings of ” Riada might be found.  There was an album of such material, including additional tracks from the Gaiety concert, released in the early 1970s and bearing the simple title of ” Riada, but this is not available in CD format from Gael Linn and is apparently still licensed to Celtic Music.