Since its inception in 1980 Dublin's GůilŪn Singers' Club had had several homes before landing in its current residence of Maye's in Dorset Street, but, despite the changes in abode, it has continued to fulfil its main function as a focus for the city's song tradition. 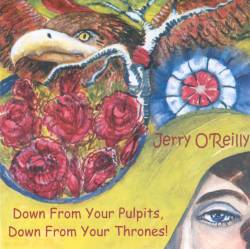 Jerry O'Reilly is one of the GSC's stalwarts and this is his first full-length recording, although he did appear on an LP recorded at the 1966 Liverpool Folk Festival.

The album's title derives from the song The Carmagnoles, reputedly sung by Irish rebels on the eve of the battle of Vinegar Hill in 1798, and illustrative of Jerry's preferences for lyrics which pull no punches whether they be ardent with revolutionary fervour (as in this case), reflectively purposeful (for example, SeŠn Mone's Lovers and Friends) or wickedly comic (when describing the virulence of the Palmerstown Fleas).

The thirteen songs on the album are drawn from a variety of sources, including a couple written by Cyril Tawney (one being the much recorded The Grey Funnel Line), and three of more recent vintage.  The latter includes the aforementioned Lovers and Friends alongside Michael Dwyer's Lament (a song by Mick Fowler commemorating the Rebellion) and, finally, Done with Bonaparte.  This last song represents the only major mistake on the entire CD, yet surprisingly, it is not the author of the lyrics, the former Dire Straits guitarist, Mark Knopfler who bears the blame (and many will be aware of his track record - some of the images here might be trite, but this is far superior to The Sultans of Swing).  The fault lies firmly in O'Reilly's corner thanks to his decision to use the air of AmhrŠn na Leabhair as the setting for Knopfler's pungent words.  Liam Weldon employed a variation of this tune for his song Dark Horse on the Wynd and, possessing a voice of innate power, had the ability and, more importantly, agility to handle the sustained parts of the melody.  In contrast, Jerry flounders in these and, in doing so, diminishes the impact of the lyrics.

Jerry's strengths, however, lie in the delivery of songs where the tune has a more rigid structure and the words offer plenty of syllables to twist his tongue around.  The rather recitative Palmerstown Fleas provides plenty of scope for this, while The Charming Quarry Cross illustrates his liking for ornamentation, even contriving to stretch the definite article into four separate elements and by no means dissipating the song's effects in doing so.  However, there is a sense in which he sometimes sings without considering either the import of the words he's delivering or their context in the song.  For instance, in the murder ballad Bridget Gare Jerry renders the lines:

He was tried and found guilty of being the cowardly slayer,
Of that innocent young damsel, lovely Bridget Gare

with exactly the same force and volume as this earlier couplet, failing to differentiate between the emotions expressed:

To Charleville with her sister young Bridget went that day,
The lark that soared in the clear blue sky wasn't half so bright and gay.

This 'one-paced' attack also mars the comic song The West Clare Train, whereas, contrastingly, Jerry's interpretive skills are well to the fore on Lovers and Friends.

Most of the songs here are unaccompanied, though three feature The GůilŪn Choir (a quartet comprising Tom Cronin, Jim McFarland, MŠire NŪ ChrůinŪn and Niamh Parsons) who provide harmonised backing on the choruses.  Elsewhere, Con 'Fada' ” Drisceoil provides sympathetic accordion accompaniment to a song ever associated with Margaret Barry which, for some idiosyncratic reason, Jerry calls The Mantle So Green.

Despite the above reservations, however, this is still largely an enjoyable album and Jerry's voice, its characteristic blend of resonance and burr, does warrant repeated listening.  The album is also graced by excellent liner notes, commencing with a typically lucid and witty introduction to the singer by Nicholas Carolan, followed by the songs' lyrics and Jerry's explanatory notes, and culminating in his own brief account of the development of his interest in singing.  The excellence of the presentation is one that we now rightly expect from Craft Recordings, but it's a still a pleasure to receive it, all the same.