This is a CD by a very talented young concertina player and it would be easy to review it by saying that if you like this sort of thing, this is the sort of thing you'll like. 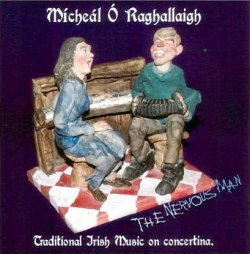 What you get is lively dance music, with a couple of slow airs thrown in, played with verve and confidence backed up by some subtle accompaniment.

Mícheál was born in Dublin but raised in Co Meath.  His parents are from Conemara and Donegal and he was given his first concertina lessons by a lady named Crotty from Co Clare.  He currently plays in the group Providence and the champion ceili band the Táin.  With that sort of pedigree this should be good old fashioned traditional concertina music, and that's exactly what it is.  From the first pulse of the jig Quilty Shore you just know you're in for a real treat.  The playing is quick but never hurried, there are plenty of well executed rolls and triplets and some lovely chords and octave playing which lift the music and emphasise the punch and rhythm of each selection.  The rhythm is supported by some mighty accompaniment from Eoghan O'Brien on guitar, Michael Rooney on harp and Frank McGann on bodhran.  The harp in particular is very effective in giving shape to the music and this is well illustrated by the hornpipes The Blackbird / Mrs Galvin's where the harp picks up and reinforces the bouncy rhythm of the tunes.  Mícheál uses three different concertinas on the CD and one has a deep mellow tone which seems to suit the more modal nature of tunes such as the jig selection Spórt and The Hawthorn Hedge.

The sleeve notes written by Mícheál are both informative and entertaining, documenting where he got a tune and where it is published.  There are a lot of references to fiddlers as sources for the tunes - Bobby Casey, John Kelly, Joe Ryan, Ellen Galvin, P Joe and Martin Hayes, Julia Clifford, Martin Wynne, Sean Ryan and Conor Tully, all renowned for their rare tunes and great settings of common tunes.  When he was growing up, most of his brothers and sisters learnt the fiddle so it's natural that he should pick up their tunes.  A few other less-common tunes and settings come from Mícheál's father who plays the box.  The title tune comes from Paddy O'Brien of Nenagh.  All but one of the tunes were written long before Mícheál was born, and it is refreshing to see a young player happy to put his own stamp on old standards like George White's or Willie Coleman's Jig, make them sound like new but without losing the traditional idiom of the tunes.

The production allows the music plenty of room to breathe with the accompaniment always just enough in the background not to intrude or obscure the main instrument.  On most of the tracks there is only one accompanying instrument.  The last two tracks see Frank McGann's bodhran introduced and only on the last set of reels do all four musicians play together.

Mícheál obviously has great enthusiasm and respect for the music he plays.  This is a well made record which shows that a musician can have fun with the music while remaining true to the tradition.  The effort of tracking down a copy will be well rewarded, because, as Mícheál says in his notes, if you don't, no refunds are available!