Dance Music from the Cork/Kerry Border 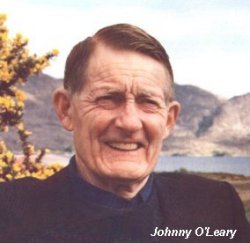 I was lucky enough to meet - and be captivated by the playing of - Johnny O'Leary at Wadebridge Festival in 1995.  This 28 track (46 tune) CD only confirms my first impression - here is a fabulous dance musician.

And what is particularly delightful, and all too rare, is that the recording makes no attempt to present him as anything else.

There's no flash, no side, no glimpse of an ego to be found - just the lovely rhythmic playing he's been lifting feet off the floor with for more than half a century.

The recording was made in Dan O'Connel's pub in Knocknegree, Co Cork, and a good number of the tracks were done whilst the sets were being danced.  It's very clear that the dance influences the music quite as much as the music influences the dance - and this, in my opinion, is exactly as it should be.  It is only when this two-way communication is taking place that really good dancing and playing is possible.

Johnny is accompanied on guitar by his regular partner Tim Kiely and, when the sets are being danced, they work very well together.  Unfortunately, this is not always the case when it's just the two of them on their own.  A sense of rythmic tension between the melody and accompaniment is an almost indispensible part of good ensemble playing, but there are a few ocasions when it slips over the invisible line between tension and argument - for this listener, at least.  It also seems that Tim's choice of chords at times force what I feel are modal melodies into a minor key.

A particular delight, for an English dance music enthusiast like myself, is Johnny O'Leary's repertoire.  Listening to the recorded output of so many modern Irish bands and solo players, one could be forgiven for thinking that Irish traditional music consisted entirely of fast jigs and reels.  Here, on the other hand, we find an abundance of polkas, slides, barn dances, hornpipes - a welcome reminder that, not so long ago, the country musicians of our two nations shared a wide common repertoire (as was also the case with song).  It's still possible, in country areas, to find players and singers whose repertoires (in part) differ little from what could be found in some English villages fifty years or so ago.

I remember with great fondness a bar in Dunmanway, Co Cork, where my wife and I stopped for a drink, quite by chance one mid-morning.  There were four men in the bar and, within a couple of minutes, a song had started - 'Go and leave me, if you wish it'.  The words were similar, but the tune different from the versions we knew.  Having shown ourselves interested and appreciative, we were asked to sing.  A little later, an ancient B/C box appeared from behind the bar, so I had to go and get mine from the car.  In the end, we were there for two and a half hours - and not a song was sung, nor a tune played, which wasn't at least familliar to both 'sides'.  Had it been half a century earlier, we might have been in a village a few miles from our home, where the local accent was different from ours - rather than in a 'foreign' country.

The intentional politicisation of Irish music since the establishment of the Republic has been very effective, and its results must be seen as largely beneficial to the Irish nation.  The down side has been the creation of an artificial musical chasm between the ordinary people of our two lands.  This is something which saddens me - we should be breaking down barriers, not erecting them.

There are certainly no barriers to the enjoyment of this music -

Johnny O'Leary can inject infectious energy into the simplest or most well known tune (sound clip) , and without any need to resort to excessive speed.  His reels, jigs and hornpipes are generally part of the wider store of Irish music, but his polkas, slides and barn dances are often quite unusual or little known.  His style of playing invests these apparently simple forms with considerable complexity, both melodic and rythmic, and it has been said that they always sound more interesting when he is playing them.  This is generally true of Sliabh Luachra musicians - they are able to get more out of this repertoire than players from outside their tradition

As is usual with local tunes, many of them are named for the players who passed them on.

There are five tunes from Pádraig O'Keeffe (see earlier reviews),

and I liked his pair of Gallant Tipperary Boys jigs very much (sound clip, left).  I'd not come across Thadelo Sullivan before, but his slide (which shares it's melody with the song Barrack Street) and two barn dances (sound clip, right) obviously tickled Johnny's fancy - and mine too.

I could go through the record track by track, but all you would discover would be my likes and dislikes - not very helpful, and rather beside the point.  This man is not about individual melodies; he's about individual style; he's about a localised musical culture (which is getting rarer by the minute); and, most of all, he's about playing for dancing - which, to my mind, is what music should be centrally concerned with.

Breandán Breathnach had been collecting Johnny's music for years, with the intention of publishing his entire collection.  He saw this as important, in that Johnny's playing single-handedly both represented and preserved the style and repertoire of the area and of its famous musicians, such as Pádraig O'Keeffe, Dennis Murphy, Julia Clifford, Tom Billy Murphy, Din Tarrant and Thadelo Sullivan, to name only a few.  Breandán's project was taken over, after his death in 1985, by Terry Moylan (co-producer of this CD) and was brought to fruition in 1994 by the publication of 348 of Johnny's tunes by the Lilliput Press, Dublin.  This recording - using the same title - has been issued to complement that publication.

'Dance Music from the Cork/Kerry Border' is an essential purchase for anyone interested in the traditional dance music of these islands.  If it also serves as a pointer to our common cultural heritage, then so much the better.  It is distributed by Claddagh - so, presumably, by Proper in the UK.

The tune collection of the same name is available from: