Whatever my students have got out of it, something that I've learned from various bits of melodeon tutoring work I've done, is that far more people can read music these days.  At the Folkworks workshop weekend in Darlington last year, every single one of the two dozen or so players could read - so it was just as well that I'd heeded complaints in earlier years and supplemented 'ear learning' with some staff notation examples.  "But you don't read music!" I hear you cry.  Quite true but, with the aid of a piece of music notation software, it didn't take me too long to learn how to write it.

However, if it's not something you do every day, some music notation software is pretty pricey - and the cheaper end of the market tends to omit the more obscure stuff, which is often needed to catch the subtleties of traditional music. 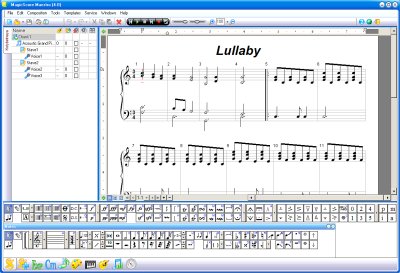 I had been using the reasonably priced and very easy-to-use Noteworthy program (www.noteworthysoftware.com) for a year or two when I found (whilst doing the bits of notation for the booklet of MT's Stephen Baldwin CD) that it wasn't possible to add bowing marks to the notation.  This caused me to do a bit of web-hunting for a suitable alternative - where I discovered MagicScore Maestro 4 (www.musicaleditor.com) at just $49.50, and was lucky enough to get a review copy of the program.

So that's part of the reason I'm reviewing it here - the other part is that I now realise that many more of you than I had suspected, might find it useful.

The Maestro 4 version is the all-singing-all-dancing version, but there are also Classic and Schools versions which are both simpler and cheaper.  MagicScore Maestro 4 is certainly a top-end tool, and appears to be able to do virtually anything the user may ask of it - far beyond anything I could possible require.  Not only that, but it seems that virtually everything is customizable - and if there is anything it can't do, it's possible to create new commands and symbols to do that as well.

Over and above what you might consider reasonable in a music notation software program, Maestro includes a host of symbols relating to various instruments: accordion 'voice' symbols, or guitar chord symbols (4, 6 or 7 stings), for example.  It also has a virtual piano keyboard and guitar neck, on which you can actually 'play' the notes onto the stave.  It can even cope with microtonal music!  Indeed, the program is so lavishly provided with features that it's difficult to know what to include in a review and what to omit.  Suffice it to say that MagicScore Maestro 4 should be able to do anything you ask of it - and at a ridiculously low price.  And despite its complexity, it seems to be reasonably intuitive to use - at least, to the fairly basic level that I've subjected it to.

The program produces several different sorts of output: printed notation, graphic files, and music files.  The first is pretty obvious, but it does allow for some very fine tuning of the print output, and produces exceptionally good results on a standard LaserJet 4.  The graphic files output can be as either .BMP, .WMF, .JPG or .GIF - and .PDF output is soon to be added to its capabilities.  This feature would allow the user prepare music score booklets, books, articles for music magazines, etc.  The only problem (and really the only one I've encountered with the program) is that whilst the printed output from the program itself is superb, all of these graphic file options produce very scruffy looking results - a general lack of clarity, jagged rather than smooth sloping note-beams, and lumpy slurs and ties.  I assume that the .PDF output option, when implemented, will be much better - because printing to a stand-alone PDF printer like the Pdf995 Postscript Printer (www.pdf995.com) has given me excellent results.

The music file output is to MagicScore's own .SFD files, but the program can both load and save as MusicXML, MIDI and Karaoke files - which makes it pretty flexible.  Unless you already own another music notation program, or have access to already created files from elsewhere, then the MIDI output and import are likely to be the most useful as they are supported by almost all other music playing software.

After having written this review in March I got a copy of the 'School' version as well.  This appears to do almost everything that the Maestro version does - indeed, the .exe file is only about 50Kb smaller - for the astonishing price of $19.95, or about Ł10.80.  This really is amazing value for so fully-featured a program, and must make it easily the best buy in the market.

However, you may not be aware (I wasn't) that printed staff notation is able to be scanned and recognised by the musical equivalent of the well-known text-based OCR (Optical Character Recognition) programs.  Again, these can be pretty expensive - but I discovered a cheap example in SharpEye v1, a music OCR program from Visiv Software (www.visiv.co.uk) for $50, which does the job pretty well - if not particularly easily.

SharpEye converts scanned images of printed music into MIDI files.  This is a difficult task for a computer program to perform, and inevitably there will be some errors when the music is complex or crowded, or the input image is of poor quality.  SharpEye has a built in music notation editor which has been specially designed for checking and correcting the output before saving it as a MIDI file.  It can also save work as NIFF or MusicXML files, and so can work with most other music software.

However, SharpEye does not scan directly - you need to scan in the music and save it as a .TIF or .BMP file first.  It should be a black and white image at 300dpi for most music - a higher resolution may be better if the music is printed small, and it's fairly important to make the scan as straight as possible.  Either drag the file into SharpEye, or use the Open File dialog, then click on the blue arrow to start the conversion.

Neither does SharpEye play back the results directly - so you have to then load the resulting MIDI file into MagicScore Maestro 4 in order to play it and check your results by ear.  There are, of course, programs which both perform the initial scan and play the resulting MIDI file, but they all seem to be significantly more expensive than SharpEye v1 - the v2 version of SharpEye does, but it's three times the price.  In any event, SharpEye v1 has produced pretty good results for me - enabling me to 'read' and listen to tunes which had previously only existed for me as sheet music.  It also saved a huge amount of time entering notes in a music notation program.  These two programs together cost around Ł50, and make writing and 'reading' music a fairly simple task ... a lot easier than learning to actually read it!