These recordings were first issued by Banff and Buchan District Council, and their reissue by Springthyme will presumably offer wider distribution for the fruits of what appears to be an interesting and rather unusual project.  It’s unusual in that the recordings were made under the auspices of a Traditional Music Residency, a post with Aberdeenshire Council, supported by the Scottish Arts Council. 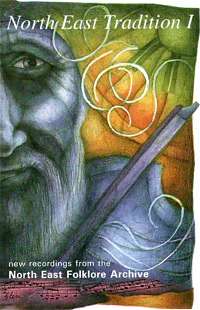 Now there’s something you don’t come across very often, but the 18 tracks here are evidence of what can be achieved when a local authority is prepared to recognise that it might have a responsibility to support activities relating to traditional culture as well as the ones more usually associated with county Arts policies.  These tracks are “a sample of the first year’s collecting work from the North East Folklore Archive”.  Tom McKean (the resident in question) acknowledges in the notes that “The tradition and the language...is [sic] at a crisis point.  The repertoire and variations in song versions are fairly static or even shrinking”, and goes on to express the hope that a programme of releases of recordings such as this one might “...help to restore some of the diversity that is the hallmark of the oral tradition”.

We start with a set of tunes on the jew’s harp, or trump as it is sometimes known in parts of Scotland.  There’s no doubt that George Murray plays it with considerable skill; the rhythms are crisp and the tempos steady, and the tunes are - well, the tunes are recognisably tunes, which I always feel is an achievement in itself on such an unlikely piece of equipment.  I have to admit that hearing music played on the jew’s harp has always been an experience that I find intriguing rather than pleasurable, as such.  Murray’s harmonica playing is more to my taste.  He plays the tunes fairly straight - the slow air Farewell to Tarwathie is played with little decoration and just enough rubato, and the strathspey Lord Lindoch shows a style of playing dance music that is notably less percussive than that of some Scottish harmonica players, whose vamping technique combines rhythm and melody.  But if this is less technically impressive, it’s still very pleasing.

Next, William McKinnon gives us a sentimental song to the tune of Villikens and his Dinah, a favourite vehicle for various sets of words in the North East.  The Demise of the Craftie belongs to a common tendency among Scottish singers to eulogise the traditional ways of the past, and indeed McKinnon’s other song in this collection, Ful Cycle o the Grun is along similar lines, “focusing on recent radical changes in land use”.  These are certainly enjoyable, for William McKinnon has a lovely, light voice, with just a hint of a poignant edge to it, but I felt a wish to hear it applied to something a bit more substantial.

Something substantial is soon with us, though, in the form of two songs sung by the excellent Jane Turriff, the strength of her delivery and the power of her performances belying the fact that she is by some years the oldest of the singers included (born 1915).  Here is a singer with all the authority and presence to handle the finest of the traditional repertoire, and if the ones here are perhaps not the most venerable of ballads, they’re fine songs in their own right.  Down by yon Green Bushes is a narrative song of apparent Irish (and surely literary) origin, and I’m Jist A Braw Young Sailor Lad is a light-hearted item, more vernacular in feel, with its various stock verses, familiar from other songs.  Turriff has been recorded more extensively elsewhere, so we can’t complain too much about only getting the two tracks by her here.  The same goes for Jock Duncan, whose CD for Springthyme is reviewed very enthusiastically elsewhere on this site, and it comes as no surprise that his contributions here are also among the highlights, especially The Battle o Harlaw, one of the biggest of the big ballads (in character, if not always of length, although Duncan’s version runs to just under 5 minutes).  John Bruce o' the Fornet is one of those songs that frequently crop up in the bothy tradition, of high spirits that somehow end up giving way to mayhem, and Duncan’s handling of the tale is pointed and witty - masterful.  These performances are in front of an audience, who join in occasionally in the chorus and applaud politely at the end.  The only other ballad performance is Elizabeth Stewart’s The Jolly Beggar, a favourite song among many of the great singers of the North East, and it’s not surprising to know that she learnt it from her aunt, Lucy Stewart.  This is an attractive and good-humoured performance with an appropriately bouncy piano accompaniment.

Robert Lovie was born in 1969, which makes him the youngest of the singers here, but he has learnt well from the traditional example.  Apart from the youthful timbre of his voice, you would scarcely find anything of style or substance to separate him from most of the more venerable individuals around him here.  He sings The Dying Ploughboy, not connected, as you might think, to Streets of Laredo (sometimes know as The Dying Cowboy), but the true story of a farm servant who is said to have died of fright.  Lovie has been winning traditional singing competitions since an early age, and it shows.  It’s a pity that he has only the one song here, but he also has made other records, which might well repay investigation.  Over forty years older, but not sounding it particularly, is Gordon Easton who gives us another of those typical bothy ballads of rural high jinks in Coortin in the Stable, as well as a fine version of Jamie Raeburn, a story of transportation apparently Glasgow in origin, but with a North East connection, as Easton himself points out in the notes, in that it uses the same tune as The Hairst o' Rettie.  Of the same generation is Andrew Dey, who plays a short self-composed waltz on the mandolin, and sings a song accompanied by guitar.

Marion Johnson sings a medley of children’s rhymes, many of which - at least in one version of another - will be familiar to generations of Scots, although I don’t know how much of this kind of thing kids sing in playgrounds nowadays.  Finally, in addition to the songs and tunes, there’s dialect poetry from Barbara-Ann Burnett (who also sings rather well) and George Barclay, both of whom would have been only in their early teens when these recordings were made.  No doubt reciting comic verse has been an important element of the tradition, and on that basis these merit their inclusion here.

To conclude, it’s worth taking a few lines to reflect on the compiler’s aim, that this issue might help to restore some of the diversity to the local singing tradition.  It is certainly true that the more such recordings are available, the more opportunity people will have to hear them, and the more likely it is that they will take the trouble to learn from them.  By definition, if you want to encourage the maintenance and development of a tradition, it is essential that people have the opportunity to hear and enjoy as many real examples of the tradition as possible - this is true of both style and repertoire.  For much of the history of the folk revival, young singers have tended to learn from other (slightly less) young singers, so that many people’s understanding of what a “traditional” singer sounds like is conditioned by listening to performers whose own experience of, and understanding of, the tradition has been second or third hand at best.  For similar reasons, their repertoire becomes increasingly standardised.  (I say this as an observation; you can read value judgement into it if you feel like it).

Realistically, though, tradition and dialect are in crisis everywhere, even if the degree of crisis varies from place to place, and it will take more than a few years of local authority and Arts Council funding to turn back the tide of international cultural homogenisation.  This really isn’t intended as a negative comment - I doubt if I’m saying anything that the funders and the people working on the project don’t know very well.  If this release gives even a handful of younger singers a fresh view of traditional style and a few new variations on the increasingly standard repertoire, it will have done a good job.  That it offers us, in itself, a fair number of performances to value and to enjoy is something else we can be grateful to the councillors of Aberdeenshire for.