'It's gritstone for me' 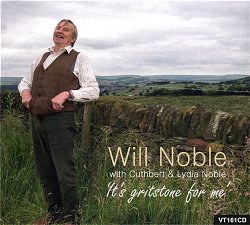 This is a nice surprise.  I've heard Will Noble sing quite a lot, over the years, but never really enjoyed his singing that much.  I think this was mainly because much of his early repertoire was gathered from hunt suppers and the like, when he was a member of The Holm Valley Tradition.  The result, of course, was that he sang many hunting songs (which I felt no affinity for), and in a manner suited to such large social events, which I don't feel ever brings out the best of a song, or of its singer.

I heard him a lot, both because he's probably the nearest thing to a traditional singer still performing in England, and because he's so obviously such a genuinely nice and authentic sort of a chap that he got booked for that very reason.  So I liked him far more than I liked his singing.  But this CD marks something of a change ... as it says in the booklet; 'Here Will presents a selection of songs he's never recorded before, although many have connections with his own home ground, others were learned during his travels to folk clubs and festivals'.

Accordingly, we get a number of songs learned from local traditional singers like Frank Hinchliffe or Arthur Howard, others like Fred Jordan or George Fradley, or from revivalists like Nic Jones ... i.e. singers who perform in far different social settings to those Will was used to.  And while I would never say that he copies any of them, it certainly colours his delivery of their songs, and allows me to enjoy them far more than the hunt supper songs.  I can only find direct recorded comparisons with a couple of Frank Hinchliffe's songs, Nothing Else to Do and It Hails, It Rains, and while it would be unfair to compare him with the sublime Mr Hinchliffe, his approach to them is far lighter than is usual for him.  His take on Fred Jordan's Outlandish Knight is interesting, in that he "... heard him sing it so many times that I found I knew it" and so sings Fred's ballad without having exactly the same text or tune; nice.

It's a very rare occurrence when a CD enables me to like a singer more that I had when I heard him sing live - but this is one of them ... at which I'm very pleased.