This album's title has nothing to do with horses, but draws its name from components, respectively, of the fiddle and uilleann pipes.  The soundpost is the little piece of wood which connects the belly and back of the fiddle, while the bridle, 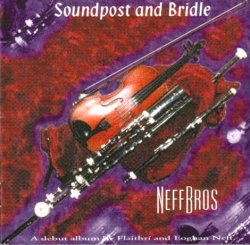 to quote the album's notes, is 'a small thin ribbon of copper looped around the cane reed of the pipe chanter'.

The Neff Brothers hail from County Cork and are just into their twenties.  Flaithrí is the uilleann piper and whistler and Eoghan is the fiddler.  For many, this combination of pipes and bow is one of the most exciting sounds and essential pairings in Irish music.  Examples of previous such recordings which spring to mind include Ronan Browne and Peadar O'Loughlin's The South West Wind, Paddy Glackin's albums Doublin' (with Paddy Keenan) and The Whirlwind (with Robbie Hannan) and Davy Spillane and Kevin Glackin's Forgotten Days.

Now, obviously, it is unfair to compare the young Neffs to this rather illustrious company, but Soundpost and Bridle is definitely not an album for the dyed-in-the-wool purist.  Indeed, as much as anything, it reflects the concerns of a younger generation of musicians than those cited above.  So the pace is often frenetic and each brother regularly adds relatively unusual ornamentations to his playing - an elongated slide up the fiddle's fingerboard, for instance, or an extended roll on the chanter.  Furthermore, Flaithrí sometimes plays in the upper reaches of the chanter's range, giving some tunes an unusual aspect and often, in contrast, keeps the drones in operation for the entirety of a tune.

As seems to be the case with many recent albums, Soundpost and Bridle includes a sprinkling of tunes from other traditions, namely a Galician air (Nom te Namores Meniña), a Breton air (An Seans Deireanach) and something described as 'a Breton march and laridée'.  Consultation of my Larousse dictionary and several music reference books fails to produce any enlightement as to the meaning of "laridée", but the piece itself seems to be a 4/4 dance tune with repeated motifs.

The remaining ten tracks are drawn from across the breadth of Ireland, including compositions by Vincent Broderick, Martin Wynne and Francis O'Connor, while the brothers are happy to include a number of tunes popular in Donegal, notably a set featuring the Castle Stirling strathspey and the reel, The Gravel Walks.  However, what is alarming about this set, which Eoghan plays solo, is that he consciously adopts an identifiably Donegal style of playing, employing a rawer sound and elaborate double-stopping.  This is clearly a man who knows his John Doherty recordings, but begs the question of the point of the exercise.

Nevertheless, elsewhere the brothers prove themselves to be their own men, though sometimes make it a family affair by being accompanied by their mother Muireann on bodhrán and assorted percussion and their father Eibhear on mandolin.  Personally, I am not fond of some of the brothers' use of electronics to create that kind of "ethereal" atmosphere best left to the producers of films for Bórd Failte and sometimes the pace of their playing verges on the extravagant, but there is no doubting their expertise nor their ability to convey the excitement of their music.

One word of warning.  Apart from including an introduction in five different languages, the liner notes include a number of oddities.  Each track's notes commence with a few lines of Irish while notes on individual tunes appear in English.  However, several familiar names have also been converted into Irish.  So, for instance, Francis O'Neill becomes "Proinsias Ó Néill".  James Byrne (not "Burns" as written) becomes "Séamus Ó Broin", a name that James would not recognize since, if anything, he would be called Ó Beirne.  Cathal McConnell is translated as "Chathail Mhic Dhomhnaill" which simply cannot be correct, especially regarding Cathal's gender!