Blacksmiths and Horsemanship in Twentieth-Century Scotland
by Timothy Neat

I have been the pleased owner of a copy of The Summer Walkers, published by Canongate, since 1996, when it was recommended to me by Bob Pegg (who knows about these things). 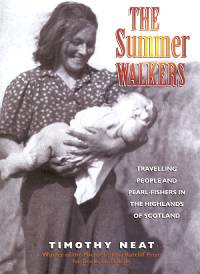 Now it has been reissued by Birlinn of Edinburgh, along with the other four books in this quintet, of which The Horseman's Word is the fifth.

Timothy Neat's method is to take a handful of people whom he believes represent his chosen topic and let them speak for themselves.  This method, handled skilfully, cannot fail.  Neat has obviously made a very strong bond with his informants, who seem to trust him more readily than they might some outsiders.  He does not forget, however, that his readers might be reading on several levels, and he manages to convey all the various nuances of the long- and more recently-past lives to both the 'man in the street' and the academic.

In The Summer Walkers, Essie Stewart and Eddie Davies are major players.  She, born 1941, was given away at birth, totally unofficially; she 'came with a letter ... saying that I was given to Mary Stewart of Remarstaig'.  Mary Stewart was the daughter of blind Ailidh Dall, possibly the most famous of the twentieth-century traveller story tellers, and who is mentioned by most of the contributors in this book.  Essie's mother was 'by blood less than half a Traveller' but Essie 'lived the Traveller life from the day I was born till the day I married, then for twenty five summers I was out on the road as wife of the pearl-fisher, Eddie Davies'.  This informal adoption was a common enough phenomenon in the first half of the 20th century, before the onset of the Welfare State.  'Looking back - giving children away must have been common in the Highlands, right up until the 1950s ...  I know myself, five people, alive today, who were given away as children to the Travellers.  There were so few of us, we needed new people ... for country people nothing easier ... than giving unwanted children to Travellers.  My step-brother, Gordon Stewart, he was adopted ... they say Gypsies steal children!  It was not stealing ... the Gypsies must have been given the children.'  The same Gordon Stewart, horseman and tinsmith, longed to adopt but by that time 'the Social Services say No!  Too old! ... there is nothing we can do - not nowadays.'

Essie married Eddie Davies when she was 16 and he 28.  'I am the last - because I am a Traveller and a pearl-fisher.  I am the last Traveller on the road in Sutherland ...  I fish the rivers all summer through ... no tent these day ... I sleep in the car, or on the ground'.  Tinsmithing and horse rearing are the best known trades of Gypsies in these islands, but Highland Travellers have long been pearl fishers.  I knew of this from Belle Stewart, whose father pearl-fished in Scotland and in Ireland, but here we get clear details of the skill used and the life lived.  An 'ordinary' man's description of what seems an extraordinary way of life - arcane, ancient and romantic.  The tales of extreme hardship, which eventually Essie - who was the saleswoman - could no longer stand, cannot not dim the shear romanticism for me.  '... no rods, no glasses, no boots.  We followed the river ... the weeds waving, the little stones, the rows of shells!  We ran ... into the water we went in our shoes.  Untouched for years ... old fine shells ... we worked until we saw the darkness coming on and never felt the cold till we were halfway home'.

Essie and Eddie Davies are only a part of this fascinating and wide-ranging book, based on the Gaelic speaking, travelling inhabitants of the Highlands - 'It was us kept the Gaelic going for many of them and that's a fact'.  Here there are also tales of story tellers and singers, old country and Traveller ways, Burkers (as in Burke and Hare, the bodysnatchers!) and a large and loving section on Hamish Henderson, of whom Neat is currently writing the official biography.

Appendix 2 of The Summer Walkers is a glossary of 'Beurla Reagaird', a non-Romany language used among Gaelic speaking Highland Travellers and described as 'a strange, pigeon-Gaelic- backslang'.

I had thought The Horseman's Word would not be of such interest to me, but it uses the same technique and is equally wide ranging, with chapters from James Dodie Stewart, son of busker Davy Stewart, and Alastair Livingstone, Baron of Bachuil, distant relative of 'Dr Livingstone I presume'. 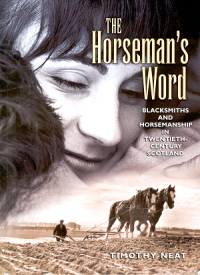 Obviously, there is some crossing over with the first book, since both deal with horses, and there is reference to Jane Turriff (still the best singer in Britain for my money) and her songs in this book, and a fine picture of her in the other.

It is interesting that, despite all evidence to the contrary in Essie Davies' story, James Dodie Stewart was brought up in children's homes for nine years; '... when the family broke up and my father went away to Ireland.  I was put in Baldowan Children's Home.  A lot of the Traveller children were being put into Homes in those days.'

The first chapter of The Horseman's Word comes from A G Mackenzie who, like his father, has taken on the name Achnagarron, the place where they live.  'Achnagarron means the place of the horse, so this must be very old horse country.'  'When I was young, before my father died, they called me young Achnagarron'.  His grandfather had gone into a smithy at 12, straight from school, and 'Achangarron, the place of the horses, is now a place of arc-welding torches, but it's still no more than a blacksmith's shop and I'll be a farrier till the end of my days'.

Both books include wonderful photographs which broaden the contributors' stories markedly and The Horseman's Word concludes with a 'photographic essay' of stills taken to enhance a film set in the Isle of Barra and Venice, 'Play Me Something' by Jean Mohr.  This film won the Europa Prize at the Festival de Cinema de Barcelona 1989.

The final contributor to this book, Charlie Barron, born in Mintlaw, the home of Jane Turriff, is the son of a horseman.  He has done every job on the farm, as well as being a welder and salmon netter.  He has also been a rigger and then got involved in the film Play Me Something.  'I played a farm worker from the Alps ...  My name is Bruno.'  'It was Jean Mohr who took the photographs ...  Bruno arrives at the bus station, then goes up the Grand Canal on a vaporetto ...  He has this trombone with him and a moothie in his pocket ...  And the pictures tell the story.  The director was a man called Tim Neat; you'll know him yourself.'

All five are available from: www.birlinn.co.uk